What to read next?

I'm having one of those episodes, quite common for me, in which I can't decide what to read next. The reason is the usual: too much choice. And I don't help myself with this dilemma at all... browsing Amazon for free Kindle books for instance. I've just downloaded Hardy's Wessex Tales and The Return of the Native, purely because I've, shamefully, never read any Hardy and want to *sometime* this year. Ha! Even I think that's funny. If I actually do, it'll be a miracle of biblical proportions...

The other thing I ought to try a lot harder to resist, is trolling round Amazon late at night. The novels of Robert Silverberg are my latest thing and I spotted this apparently 'classic' sci-fi collection of his: 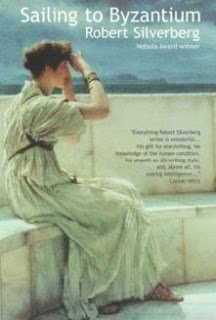 I did stop to read a bit about the stories, I really really did, but to tell the honest truth - I took one look at that cover and that was it, I had to have it. It's in the post as we speak.

And I've just finished this: 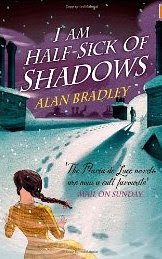 I'm Half Sick of Shadows by Alan Bradley, book four in his Flavia De Luce series. It was huge fun but I don't feel likde doing a long review so will probably just mention it in my monthly round-up post. I do recommend this series to anyone who likes a fun crime series though. Flavia is completely wonderful and the books just get better and better.

Another way in which I don't help myself in my 'what to read next' quandaries is the library. Two more books on reserve have just come in - Miss Read's Thrush Green books as a matter of fact. I haven't read any Thrush Green since this time last year and I was feeling the lack. And while I was there I spotted an anthology edited by Neil Gaiman and Al Sarrentonio, simply entitled, Stories. Loads of interesting authors in this: Joanne Harris, Peter Straub, Diana Wynne Jones, Gene Wolfe, Lawrence Block and so on. Of course I couldn't resist and now it's on my library shelf...

But I was still dilly-dallying about what to read next, and so... browsing my own shelves I came across this: 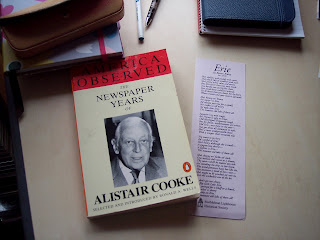 America Observed by Alistair Cooke. Anyone of a certain age in the UK will remember Cooke's Letters from America on the radio. I remember listening to them as a child and being fascinated by this country far across the Atlantic that I was sure I would never get to visit. But Cooke was also a newspaper man and from 1946 to 1972 wrote columns for The Guardian about life in the USA. I started to read, the first one was a little piece from 1946 about Christmas...

Up from Florida comes a postcard containing the gentle sneer of a friend, naked under a coconut palm. Down from Vermont the apologies of an invited guest, buried in his farm under thirty inches of snow. From Hollywood we hear the alarmingly modest confession that it would be nice once in a while to see some of God's own snow, as distinct from the usual studio product of sand and limestone with a coating of cornflakes. Only New York, suspended precariously between the American Arctic and the American tropics at about the latitude of Madrid, can keep up its chronic conceit that everything about it, including the climate, is typical of the best and brightest in American life. This, on Christmas Eve, means a temperature in the low forties, 'considerable cloudiness and shifting winds'.

Down in the Carolinas, Federal agents were still hunting the hills for moonshiners, one of whom this week, caught working an illicit still on a mountainside, was reported not to have heard that the Prohibition Act had been repealed. 'Wait until President Harding hears about this' is the uncomfirmed report of what his brother said.

To Americans with friendships in England there was a further last-minute cause for rejoicing, for the New York Times reports that 'Britain rejoiced today when a thaw set in after the coldest night of the year'. Sympathetic readers who imagined Minnesota's twenty below zero, or even New York's fourteeen above ten days ago, were puzzled by the news that the thermometer was only in the twenties. However, The New York Times charitably explains that 'Britain is always ill-equipped for cold spells because of the lack of steam heating and the faulty construction of windows in most houses'. A murrain on you, British builders, a chattering New Year to you, members of the National Glaziers and Plasterers union!

Joyous, absolutely 'joyous'! I'd forgotten what a wonderful writer Alistair Cooke was, and how funny. By the way, I had to look 'murrain' up... it has a few meanings but in this context it means 'a plague'. I'm still not sure what I'm going to read next but what I am going to do, along with my current enjoyment of Debo Devonshire's various fascinating thoughts in All in One Basket, is enjoy some of these wonderful American dispatches from Alistair Cooke.

I hope you're all having better luck than me in deciding what to read?

I am having a hard time, too. I keep starting more books because there are so many that I want to read! I really need to finish some of them...

sisters to the end! lol gah! I do that all the time ..can't decide. And then.... I read a few pages of 3 or 4 books and decide on one. I also found that the more i enjoyed the book I just read, the harder it is to settle on the next book

I have too many books on the go at the moment. Need to go through a spate of finishing.

Kelly: This is the problem - there are so many great books out there to read!

Pat: You're absolutely right, the better the last book the harder it is to choose the next one... and it's hard enough as it is! It's almost like you need a couple of days of reading nothing to get that one excellent book out of your system.

Jo: I try not to have too many on the go at one time... I'm easily confused. LOL.

what the heck has blogspot gone and changed now?? the comment thing is changed ...and ugly lol

Oh, Cath, I know that feeling of not knowing what to read next, or being called to read this or that, with piles of books teetering and tottering. I came home from the library on Saturday with more books than I can possibly read by the due dates. Not one library, but, two I visited.

I've just settled on The Thirty-Nine Steps - a small thriller from the beginning of the last century, because I saw it in a small bookshop, it is a small book to tide me over, and I've never read it.

I can't ever read more than one book at a time and I always have to have the next book lined up ready to start.

I have enough trouble keeping up with the plot in one book, let alone attempting to follow 2 or 3 stories at a time!

Now that I have 'discovered' 'cozy' mysteries, I really must try the Alan Bradley books, everyone seems to rate them very highly.

I love the cover of the Silverberg, but after digging around a bit more, I have decided that this just wouldn't be the book for me. I can't remember ever buying a book solely for it's cover, so I hope that it meets expectations when it arrives.

You also sound as bad as my mother-in-law for downloading the 'freebie' classics onto her kindle (by default I get them as well!!). I have asked her when she intends to read any of them, as she also downloads a whole host of books every month. She just says that she doesn't know, but they are always handy to have there ... just in case .... In case of what? she is never going to run out of reading material!

I guess that you should really tackle the library books first, as they are only borrowed and need to be returned ... and yes, I CAN remember Alistaire Cooke, compulsory in our house from what I remember, together with 'Wicker's World' when that was televised.

You really are going to have to make that decision soon .... Enjoy whichever one you choose.

Oh, Alistair! Was Sesame Street on over there? Alistair Cookie! :<)
When I was a little, little girl I remember Omnibus. And then later, he did AC's America, and then was host of Masterpiece Theatre.
I've just finished a marvelous book that ties our two countries - The Apothecary by Maile Meloy.

Books, books, books, books....I've got 15 out from the library, all the Christmas ones I still haven't read, and then I bought 4 more today. I did find after I finished MOving Mars, that I couldn't settle down that night to read at all. I was thinking over the book, and I didn't want to be distracted while my brain sorted it through. Eventually I think I wrote in my journal and went to sleep, and the next day I could read. It doesn't happen often, so it's a sign that Moving Mars really reached part of me.

I have a gazillion books on the go too, it feels like!

I'm emailing you about The Morville Hours now :-)

Penny: I'm so impressed at two libraries visited - not sure if I've ever done that.

I read Thirty Nine Steps years ago and loved it. We had a TV series about Richard Hannay back in the 80s too, I think, starring Robert Powell, who was perfect in the part.

Yvonne: If I'm reading a couple of books at a time it tends to be a fiction and a non-fiction and thus I'm not having to keep up with more than one plot at a time.

No, the book would probably not be for you. The painting on the cover though, is by Sir Lawrence Alma-Tadema, who I had not heard of. So I Googled him and found a site with that painting on, it's called Expectations, and many others, all beautiful. In fact, I put another one up as my new wallpaper.

I understand why your mum keeps downloading freebies to her Kindle. I tend to think that my Kindle will hold thousands of books so they're not taking up space on my shelves and therefore there's no harm.

I made a choice, At Home in Thrush Green, and have already finished it as it was so readable. Now I'm back to square one. LOL.

Nan: I'm really tickled pink by the idea of Alistair Cook on Sesame Street. How funny!

I don't know The Apothecary, so will go and check it out in a minute.

Susan: I certainly know that feeling of needing a day or two to get over a powerful book. And it's no good fighting it I find.

I don't know if you actually sent me an e.mail, but I certainly didn't get one. Let me know.

I like the cover of your version of I'm Half Sick of Shadows. Hoping to get to my audio version soon. I've enjoyed this author in the past.

Have a great weekend Cath.

Diane: I like this cover too. It was a library book and different to all the other covers of this series that I've read so far - and far nicer. I think you'll enjoy it when you get it, Flavia is once again on good form.

Enjoy your weekend too.