My second read for Carl's R.I.P. VII is Mistletoe and Murder by Carola Dunn. 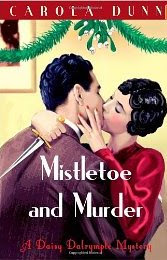 It's Christmas 1923 and Daisy Dalrymple has conceded to the demands of her snobbish mother and agreed to take her family to Brockdene for the holidays. Brockdene is a Tudor manor house in Cornwall, situated beside the river Tamar, which forms the border with Devon and Cornwall. It's isolated and therefore tricky to get to. It has a long, long history of smuggling and therefore tales of secret tunnels and ghosts abound.

Daisy goes ahead of the family as she is doing an article for a magazine and wants to gather information and photos before the Christmas mayhem begins. The house is occupied by the Norville family, poor relations of the the Duke of Westmoor.

Once there, Daisy's detective nose is alerted by the oddness of the family. Godfrey Norville is obsessed with the history of the house, to the exclusion of all else. His mother is an Indian woman and very soon Daisy discovers that there is some doubt as to whether she was actually married to the father of her two sons. The fact that he had gone to India and married a local girl causing scandal within his family back home. This is not helped by the fact that he died soon after arriving back in England and the marriage certificate was lost.

The current family are a peculiar lot and made even more so when the other brother, a captain in the navy, arrives home from India with a rather puritanical minister. It seems he might know something about the marriage but before he can reveal all is killed with a knife in the chapel on the estate. Daisy's husband, Alec, a Scotland yard detective, has to give up his Christmas holiday in order to investigate the murder. And of course there's no way that Daisy is not going to help...

This is Carola Dunn on top form, in my opinion. I thoroughly enjoyed this country house mystery and the reason for that is that the author states at the beginning of the book that she based the house on Cotehele in Cornwall. I've been there several times so this really brought the book alive for me.

Sadly it's many years since we were there so I don't have photos but I borrowed this one from the Cornish Tours website: 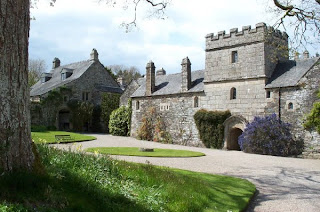 The property is now owned by the National Trust and here's the page for Cotehele. It's a stunning property in beautiful grounds and an ideal setting for a mystery novel.

Anyway, the book was, as are all the Daisy books, huge fun. The author fills her books with wonderfully quirky characters and this one was no exception. There are also some very human moments... the surprise Daisy feels at how much she misses Alec when she's not with him, the hurt her mother inflicts on Daisy as she denigrates Alec and his police job in front of strangers, and Daisy wishing she had the kind of mother or mother-in-law that she could look after and cosset. Daisy finds her life interesting and fun, but all is not a bed of roses by any means.

glad to hear you and "daisy" are still having a good time lol.. ohhhh love those shots of the home in Cornwall!! I think as we grow older we "want to go back home".. :o)

O, I am just back from the library, where I tossed up between this and 'Gunpowder Plot', and plumped for the latter... have never ready any Daisy Dalrymple, but people keep telling me they enjoy Carola Dunn.

I haven't read any Carola Dunn yet, although so many people rave over her books, obviously including yourself.

I was checking her out and see that she also has a series of three books called 'Cornish Mystery', which features a very 'Miss Marple' type character, called 'Eleanor Trewynn'.

I think that this series appeals to me, so I am aiming to start my discovery of Dunn's books here.

We visit Cotehele every time we go to Cornwall and never tire of its beauty and it ties in well with the 'Cornish Mystery' series.

Glad that you enjoyed your book and thanks for introducing me to yet another great author.

I love Daisy Datrymple (thoub by now she has changed her name?--I'm not quite this far--am just about where she and Alec have gotten engaged). I really need to pick up the next book--I try and spread them out, but with the finally cool weather another sounds good right now! How cool that you have visited a place that features in one of the books--it makes it even better reading to know what she wites about--to have such good visuals! I think I'll be finishing my first RIP read this weekend!

Christine: I do hope you enjoy your first Daisy Dalrymple book. A friend is reading Gunpowder Plot and greatly enjoying it.

Yvonne: I got them from The Book People... just google them and the site will come up. Lots of book bargains there. I buy their sets of books as Christmas presents for people. Very reasonable prices.

I'll be interested to hear about CD's Cornish books when you get to them. I'll try those when I've finished the Daisy books.

Cotehele is definitely one of my favourite NT properties. Such a tranquil atmosphere there... something to do with the river I think. My brother hired a cottage just across the river, on the Devon side, a couple of years running and I fell in love with the spot. When Daisy is brought up the river by boat at the start of the book I could picture it so vividly I was almost there. I do love a book like that.

Danielle: Yes, she has changed her name but often forgets still when introducing herself. And of course Carola Dunn has kept the DD tag... perhaps she should be known as Dalrymple-Fletcher, though that is rather a mouthful. lol

Fabulous visuals... it enhanced the book for me no end.

Look forward to hearing about your first RIP book. I'm now reading Dark Matter by Michelle Paver which a lot of others seem also to be reading. It's very good.

I am so tempted by that Book People offer as I know I will read the books eventually!

That was how I came to buy nearly all the Agatha Raisin ones.

Jo: I feel like a pimp or something... tempting you to go and buy books. ;-)))) But The Book People have such great offers. I got Tess Gerritsen books last month...

I just found Death at Wentwater Court, I'm so excited! At last! A second-hand copy, so almost like your bargain books you're getting. Now I can start to read the fun too :-)

Your review here is lovely, by the way. These mysteries sound like so much fun!!

Susan: I hope you enjoy it after such a long wait. The first book was quite good but they really took off at about book 5 if memory serves. The mysteries are great fun and Daisy and Alec are so good together. When I've finished the series I might go back and start again to remind myself how their relationship began.