At last I have my first book for Carl's R.I.P. VIII under my belt. I actually had to finish another book before I could start... it was a very good book... but a little frustrating as I wanted to be off and running with R.I.P. Well now I am and my first book for it was The White Road by John Connolly, book four in his very well known 'Charlie Parker' series. 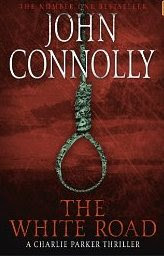 Charlie and his new partner, Rachel, are now expecting a baby. Charlie is understandably uneasy as his former wife and young daughter were brutally murdered. The murderer was caught but Charlie knows full well that there are still people out there who want to get him and would stop at nothing to achieve their aims.

He gets a call from a former colleague now living in South Carolina, Elliot Norton. Norton is a lawyer and has taken on the case of a young black man, Atys Jones, accused of raping and murdering his girlfriend. The case is high profile because the girl is a member of a white, well-to-do family in the Charleston area. Norton is asking Charlie for his help but Charlie is reluctant, partly because of Rachel's pregnancy and not wishing to leave her alone, but also the case is giving him a bad feeling. Faulkner, the religious psychopath who was involved in his last case, is in prison but likely to be bailed by a man also local to Charleston. Is there a connection with all that's going on?

Charlie somehow feels compelled to go to Charleston to help his friend, Norton, out. What he finds there is a tangled web of lies and deceit that go back forty or fifty years to the days of racial segregation, and even beyond. It seems that Atys Jones' mother and sister disappeared in suspicious circumstances. Slowly, Charlie discovers that a group of young white men were involved, who these boys were, and that they are all still alive. His involvement is apparently highly unpopular because of his reputation, but is that all there is to it? And then someone starts to murder the group of men, one by one...

This book is a lot more complicated than I have managed to describe. John Connolly writes fabulously complicated plots and you need to keep your wits about you when you embark on one of them. The background plots are always some kind of grisly murder but never, ever simple. Charlie Parker sees dead people, has done since the death of his wife and daughter. In this book the supernatural element is increased to the point where we begin to wonder what Charlie is. It's partially explained - I'm not saying how, but I have to admit to being somewhat gobsmacked at the ideas behind it all. John Connolly is such a classy horror writer, one of the best and certainly my favourite at the moment.

The other thing I just love about this series is that the author does not treat the reader as an idiot: so we get history and geography lessons. In this we learn a little about the history of slavery, racial segregation, what the area around Charleston, SC, is like, the swamps and so forth. I did not know, for instance, that rice was grown in South Carolina. I thought slavery was based mainly on cotton and sugar... but 'rice'... news to me. Fascinating.

There are now eleven books in this series, plus a novella in the anthology, Nocturnes. The indication seems to be that the novella fits in after The White Road - I haven't read it yet, so will probably read that after my current RIP read. So thrilled that there are still so many Charlie Parker books for me to enjoy. A word of warning - they're probably not for everyone!

dI hope you have better luck than I am having! sheesh. I have already set one book aside after 129 pages and now I am doing it again after 119 pages into Dan Simmons The Terror. The few people I know that read the Terror loved it..but 119 pgs and I do anything but pick up the book to read more and when I do it find it boring boring boring. I am not into "ships and crews" or am I into Ice, Ice Ice.. and althought "something out there that kills" is mentioned now and again I don't find myself wanting to know what it is!! So... ends another try.. now I am trying MIdnight in the Garden of Good and Evil and so far It's interesting me to want to read.. so I hope this one continues in that way!
Really glad you enjoyed your first read! I hope your second read is as enjoyable!!!!!!

I know I keep saying this, but I have to get to book one in this series! I had to skip over parts of your review so I wouldn't know too much about this series - it's amazing what learning what a book 4 or 5 in a series can do when reading book 1! lol I'm delighted that you really like the series, and I have hopes of reading the first one shortly. Did it put you nicely in the mood for autumn and RIP?

I have not read any of these books. They sound really good, Cath. I did live in Charleston South Carolina several different times. Both my boys were born there. Good luck with the challenge!

Congrats on your first RIP VII read! I had no idea there were so many books in this series. For me the author seemed to burst onto the scene with his novel The Book of Lost Things when in reality he had been publishing things before that. I have yet to read him but continue to hear good things.

Just picked up the most recent of the Charlie Parker books from the library so I am a happy bunny.
You are right that John Connolly isn't for everyone, but they are definitely my cup of tea and I tend to read them very fast!

Don't usually read this genre but I think I should move out of my comfort zone. Mistletoe and Murder from your earlier list sounds intriguing!

Pat: That's such a shame. Considering how much you loved Drood, you'd have thought that other book by him would've been good too.

Halfway through my 2nd read for RIP, a murder mystery, and yep, I'm enjoying it hugely.

Susan: I know you would *love* the Charlie Parker books. They're so *you*. Truthfully I've not read book 1 myself. Couldn't find it so I started with book 2 and it's fine, they tell you the events of book 1 as you go along. I probably should tell you who I think of as Charlie Parker but that would be way too embarrassing... but we both like the actor. ;-)

Peggy Ann: How fascinating that you lived in Charleston for a while. I've only been as far south as N. Carolina but hope to get further south one day.

Carl: Yes, there are eleven now. My husband introduced me to the series. Kept going on and on about them until I eventually gave in and got book 2 from the library. I'm *so* glad I did.

LizF: Oh another fan. Excellent. We whipped up to South Molton yesterday (about 20 miles) to grab the next three books for me. It's a very pretty drive but I would've driven 20 miles through an industrial wasteland to get those books. LOL.

Nicola: I think these would be right out of your comfort zone, which is a real shame as the writing's terrific.

Murder and Mistletoe is book 11 of Carola Dunn's Daisy Dalrymple series. These I think you would like actually. They're light reads that are huge fun. I'm halfway through M & M and loving it.

This sounds like a great read and has now given me an appetite to introduce some John Connolly books into my reading very soon.

Just to put it into perspective ... I read the very first Charlie Parker book 'Every Dead Thing' not long after it was written back in 1998, but haven't read anything since. Seeing as book 11 in the series has just been published, it looks as though I have some catching up to do, although I see that your own recently completed book, 'The White Road',is only 4th in the series.

A great review and thanks for putting me back in touch with John Connolly books.

Yvonne: John Connolly is my author discovery of 2012 I think. Although I had read a couple of his other books and liked them, I absolutely love his Charlie Parker series. I haven't read that first book and it hasn't mattered but I do think I'll go back and do that sometime soon. I'm in awe of his writing style (humorous, informative, chilling) and of the ideas he's just started to introduce. You won't be sorry if you pick up more. Yes, 11 books now and I just grabbed the next 3 from the library. Very happy.