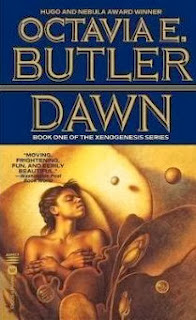 Lilith Iyapo is 'awakened' on an alien spaceship. It's not the first time she's been awakened but her memories of what happened on previous occasions are a little vague: disembodied voices speaking to her but never answering her questions - where am I? What do you want with me? - strange alien rooms that she has tried to claw her way out of, to no avail. A terrifying nightmare.

She knows and remembers that humanity has destroyed itself in a nuclear war. She was alone anyway, her husband and young son having been killed in a car accident before the nuclear holocaust. Somehow she survived but how she was rescued she doesn't know.

This awakening is different. For the first time she sees one of her alien captors, the Oankali. She finds him grotesque and repellant but knows this is because he is so different. His job is to get her used to his species, speaking to him and touching him without being overwhelmed by her fear. Gradually they establish some kind of relationship and Lilith discovers her fate. It seems that a few humans survived and were saved from the nuclear winter on the planet. Lilith has been on the spaceship for many years, mostly in suspended animation. It seems that she has been deemed suitable to awaken a group of forty humans and is to teach them about the Oankali and lead them back to Earth to begin anew. But why should this alien race go to all this trouble? Is there something in it for them? But, of course...

Goodness me, I seem to have been seeing recommendations for Octavia Butler's work for years. She passed away only a few years ago I think, and if this the quality of writing lost - what a tragedy. I didn't really know what to expect when I started this, my first book by her. I gathered she wrote books from the black female perspective and this is what Dawn is... plus I expected a bit of a feminist slant to the story. Whether that's there or not is open to debate in my opinion. I didn't come away with a great opinion of the men in this novel, but then the women were a mixed bunch too. Lilith is by far and away the most interesting and sympathetic character, closely followed by the Oankali themselves.

Butler, in fact, created a very believable alien race in these books... this is book 1 in the Xenogenisis series... and to be frank I found them more sympathetic than the humans. For one thing this book is, if nothing else, is a study of how groups of people behave in circumstances that are stressful and out of their control... when the experience is prolonged. How they form cliques, create a hierarchy, take sides, find a scapegoat when things are difficult or inexplicable and so on. I found myself getting severely frustrated by the stance adopted by many of the human group, even found myself thinking, 'If they'd ever read any science fiction they might not be behaving in this manner!' Which is silly... which of us has any idea how we would behave in these totally unknown, terrifying and unpredictable circumstances?

Lilith truly did not want this job. She's not hungry for power and is possessed of a great deal of wisdom and tolerance. She can easily see how this could pan out but is frustrated that the alien race are very bad at listening to her. It's a recipe for disaster, but she is still the best person to handle it. It made me consider the kind of people we allow to have power in our various countries and the wisdom of giving it to those who actually *want* it. This is indeed a very thought-provoking book. You can't read it without thinking quite hard about the nature of humanity, power, group-dynamics and so on. The aliens in this book consider humans to have a fatal flaw and if you can read this without at least giving some consideration to the idea that they might be right, you're a better person than me.

Book two in this series is Adulthood Rites. I don't own it yet but believe you me I intend to.

This sounds a very powerful book and very thought-provoking.

I've just finished reading my second book for this challenge, which although a much older book and therefore dated (especially with regard to attitude towards women)also gave me much to think about. I can see I'll be reading more sc-fi in future.

I got a trilogy by her for Black Friday sales in 2012... I just haven't read them... I wish I had my tablet to tell you what they are, but my tablet had to be sent away for warranty work. I hope it is this one!

Margaret: I know the description, 'thought provoking' is rather over-used, but in this case it really does apply.

We are doing well with this challenge, aren't we? I think the older sci-fi stories can serve to underline how things have moved on in 50+ years or longer. I'm planning to try to keep reading sci-fi throughout 2014. I really seem to have rediscovered my taste for it.

Kelly: I hope it's the same trilogy. If it is you're in for a treat.

Love the idea that they should have read some SF!!

I've seen recommendations for Butler's work but never read any - I do tend the fear that feminist SF is just going to be too politically conscious, which is probably unreasonable of me. You've persuaded me in this case, I think.

I picked up this series on a Cyber Monday special, and based on your review, I can't wait to read it! :)

Geranium Cat: I have this entrenched idea that people who read sci-fi are more open to crazy ideas than those who don't. Whether this is actually true or not is hard to say. LOL

Dawn is not a politically conscious book. It's more concerned with humans as a race and how they cope with situations outside their limited experience. The 'sensible one' is a woman and that's the only way in which it might be called feminist. But then if you think about how many books have a 'sensible' man as the hero, then the odd book where a woman takes that role makes a very nice change to be honest.

Grace: I hope you enjoy it as much as I did. I'll definitely be getting the other two books.


I love reviews when people are more then happy they read that particular book~ Sounds like you have yourself a winner.. and a new series! (excuse me while I chuckle here a bit lol)

Hey Pat! Yep, it really was a winner for me. I'm trying not to dwell on the fact that it's yet another new series. LOL!