My second read for Carl's 2014 Sci-Fi Experience is The Warrior's Apprentice by Lois McMaster Bujold. 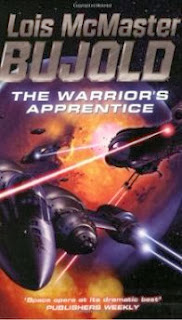 Miles Vorkosigan is the son of an aristocratic family on the planet of Barrayar. Due to something that happened while he was in his mother's womb he was born disabled - thus he is dwarfish and brittle boned. Despite all this he still wants to be an officer in the Barrayaran Military but, obviously, although he has sailed through the accademic exams he's struggling badly with the physical requirements of the training.

Crashing out, Miles is sent off to the planet Beta to visit his grandmother, along with his bodyguard, Bathari, and Bathari's daughter, Elena. Of course it doesn't work out like that. Miles ends up saving a pilot who has holed himself up in his ship and won't come out, by buying the ship and hiring the man. Another man, in different circumstances, an engineer, is also saved by Miles and suddenly he has the start of his own freight business come mercenary force. Along with Bathari and Elena the five of them end up in a war zone where things really turn interesting, because deciding whose side they're on is really difficult...

I'm not sure whether this can be counted as the first book in the Miles Vorkosigan series or not. This is because there is a book, Shards of Honor, that deals with how Miles's parents met and the reason for his disability. I believe some look upon it as a different series (Fantastic Fiction list it as such) or a prequel, but it was actually written in the same year so possibly they're meant to be read one after the other depending on what the reader wants to do. Personally, I wanted to start the series and Shards of Honor had not yet arrived so I read The Warrior's Apprentice first. I'll be able to judge when I've read both whether it makes any difference whatsoever.

This a hugely popular series and I can see why. This first book is a very enjoyable space opera romp... possibly coming into the 'military science fiction' category too. I'm not sure that would normally be my thing as I'm not hugely into war stories or battle scenarios. But Miles is an excellent character, reminding me at times of Star Trek's Captain Kirk with his charismatic personality, and that saves it completely in my eyes. I love the fact that Lois McMaster Bujold was bold enough to make him disabled. How very much more interesting is he in his thinking when you can share his unbidden thoughts about his disability and how he can cope with physical challenges or the manner in which he is treated differently to everyone else. For me this was probably the best element to this book. That said, I also enjoyed its other-worldliness... I always enjoy this characteristic of sci-fi novels... build me a convincing alien planet with weird customs and I'm always a happy bunny. It's the reason I read this genre if I'm completely honest, and it's very well done here.

Obviously, I'll be continuing on with this new to me series. I have a couple of other sci-fis I want to read first but will definitely be reading Shards of Honor within the confines of The Sci-Fi Experience.

I really don't know why I haven't read more of this series. I just read the one book, really liked it, and that was a couple years ago. I must get back on track! (Starting with figuring out what I am supposed to read next... There are a few different reading orders.)

Kelly: There are different reading orders, you're quiet right. I'll be reading Shards of Honor when I get back to the series in a couple of weeks. After that, I'm not sure.

Actually there are two books, Shards of Honor is where they meet, Barrayar is about Cordelia's pregnancy and what happens to Miles. Both are collected in a volume called Cordelia's Honor.

I'm hoping I'll get this book for Christmas so I can dive into the first Miles story. Glad you decided to dive into Bujold's universe!

I think I'm very much missing out, having not read any Lois McMaster Bujold (that I remember). This will be the second book of hers going onto my TBR list.

Carl: Yeah, it would've made sense for me to get Cordelia's Honor but never mind, I'll get Barrayar and the next Miles book after Christmas. It's no hardship. LOL!

katenread: I resisted for years and am now sorry I did. On the other hand it's a shiny new series to get my teeth into for 2014. :-)

I have one of these books by her! I read a short story featuring Miles and really enjoyed it several years ago, so since have wanted to read some of the novels in the series. Well, I just went and checked - and I have the one you just read here! I have it in a new book Young Miles, which has put The Warrior's Apprentice, "The Mountains of Mourning" and The Vor Game together into one omnibus volume. Well I'll be....reading it soon, I hope! thanks to your review.

I'm disappointed I don't want to read science fiction this month. I've tried three books so far, but none are working. So it's fantasy for me at the moment. I'm enjoying all your reviews of what you're reading, though!

Susan: How funny that you have this same book already on your tbr pile. Don't worry I'm sure you'll soon want to return to science fiction and will probably do so with a vengeance. LOL