It's been rather strange watching The News this past few days with news of the bad winter being experienced in Canada and much of the USA. Strange because it's coincided with my first book for the 2014 Mount TBR challenge which is being hosted by Bev at My Reader's Block. That book being The Long Winter by Laura Ingalls Wilder, I've not only been reading about snow and blizzards but seeing the reality on the TV! 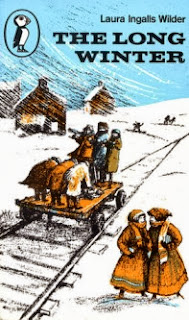 It's the end of summer in De Smet, South Dakota and the Ingalls family is pulling in the harvest that will take them through the winter. The harvest is not as much as Pa would like as the family have only been here a short time and the farm is not quite established. An early blizzard strikes in October and gives Ma and Pa a scare. Pa doesn't like it, a blizzard this early in the Fall feels all wrong and his fears are compounded when an old Indian turns up in the town store one day. 'Heap big snow come,' he tells them. 'Many moons.' It seems they are being told that 'Every seventh winter was a hard winter and at the end of three times seven years came the hardest of all. He had come to tell the white men that this coming winter was a twenty-first winter, that there would be seven months of blizzards.'

Heeding the warning, Ma and Pa decide to move the family from the shanty on their claim back into their more solid home in town. Laura and Carrie must now go to school, Mary of couse cannot as she is blind. The two girls are nervous about school but soon settle in. But it is while they are at school one day that another blizzard hits. The children and teacher have to find their way back to town... it's not far but in a white-out the trip is frightening and hazardous. But this is only the beginning of the long winter. Things will get much, much worse as the little town on the prairie is cut off from the outside world for seven long months.

What a brilliant little book this was. I don't think I've ever read better descriptions of how it feels to be stranded in snow and blizzards than this. Laura Ingalls Wilder must surely have lived through something like this to be able to write about it so convincingly. It's all there, from the terrifying and monotonous sound of constant wind, of trying to keep warm in a house that of course had no central heating... and what happens when the train can't get through and the town runs out of coal. Pa and Laura end up twisting stalks of hay to burn. This is hard, grinding work in freezing temperatures, but they must do it or the family will freeze. And then there's the problem of food. They don't have enough for seven months so what will they do?

There are scenes in this book that are so well written that I was as scared as the characters being written about. A small scene near the start when Laura and Carrie take a short-cut through the slough and get lost for instance. The one already mentioned when the children are being led home in the first blizzard. In another scene Alonzo Wilder and another lad go out onto the prairie between blizzards, trying to find a farmer who may have wheat they can buy for the town. It's terrifying quite frankly... they could easily get completely lost in a frozen wasteland or caught in the next blizzard and die of exposure.

Really this book is a tribute to the close unit that is family. Or what a family *can* be if all members pull together for the common good. The Ingalls are amazing people. Too good to be true? Well, possibly. But I don't mind that, there are others in the book who are not as good so there is contrast and friction to be found within the pages of the story. I was sorry when the book ended, I had loved it that much. Sadly this is the last of these books that I own. I'll have to buy the next one, The Little Town on the Prairie, which I will do as I want to know how Laura goes about teaching to earn money to send Mary to a college for the blind. The temptation is to buy myself a boxed set of all nine books as I know I'll want to read them again soon.

Good ole Canadian winters... We are cold right now, but we had a mild and rainy day that too away a lot of our snow... I think we live in a good spot. :)

I had forgotten these books but growing up in Michigan I did read all of them. What a pleasure it would be to reread them. I wonder if Indians really talked like "big heap snow coming". I laughed out loud. Loved revisiting this book.

I haven't read The Long Winter since I was a kid, I think I'm due for a visit and winter seems like the perfect time.

Thank you for reminding me of this childhood favorite with a great review.

Kelly: I think you probaly live in a wonderful spot! Am very envious.

Pam: They were available in my library in Penzance in Cornwall but for some reason, and I've no idea why, I didn't want to read them. I feel sorry now of course, but there you go.

I laughed too, but honestly have no idea if Indians really did speak like that. LIW did live that kind of life didn't she? I haven't read her autobiography so am not certain. But if she did then I assume she was being as true to life with their speech as she was with all the other details. It's an interesting point.

Whitney: I think you'll find you'll get a very different perspective as an adult and that it's well worth rereading.

I have never read these books. Watched the TV show though. TV ruins my reading sometimes:) I will have to get to these books sooner or later. Maybe having a young grand-daughter will help me get there! Have been to South Dakota several times but never to De Smet. Must twist hubby's arm next time. Really nice review Cath! I'll bet my library's children's department has all of these!

Love your descriptions of this book. Really want to read it now. Thanks for the review, Cath!

Peggy: Grand-daughters are great for getting you to read books you might not normally read. I love talking books with mine. I would think your library would have them too.

Nicola: It really is a super little book. I often find children's authors from years ago were terrific at creating certain atmospheres in their writing.

I never read any of the books but remember watching the tv show, it seemed like forever... it pretty nearly was since everyone grew up before our eyes! It was a great show

I loved this review, Cath! Loved the entire series of Little House books, but this one is my favorite. It connected with my own family stories of pioneer great-great grandparents and the harsh winters of Wyoming and Utah.

Pat: Yes, I remember the TV show too. Cute kids and Michael Landon. :-)

Robin: Thank you! I think this one will be be my favourite too, once I've read them all. How interesting that you have that kind of family ancestry!

Cath, I read these books - the whole series - when I was growing up, and loved them. Truly adored them, much more than I ever did the tv show, which I only watched a little of. The Long Winter was one of my favourites, for all the reasons you mention, and also because we have winters like that (except we don't live in log cabins any more! lol) I learned alot about the early days of settlers from her books, and loved that they were based on her real life. I'm so glad you enjoyed this one, and with our long cold winter here now, I'm of a mood to read it soon now :-)

Susan: I understand so well why you adored these books. They just have so much heart. I think one of the reasons I loved The Long Winter so much is that we 'don't' have winters like that and there's a sort of horrified fascination. LOL!

What a brilliant post about The Long Winter! I say "brilliant" because I believe you captured the essence of all the qualities that make this book an outstanding work of literature.

I wish that more adults would read or reread this book and others in the series, because there is so much for a sophisticated adult reader to appreciate.

I teach Children's Literature to college students embarking on teaching careers, and this is the one in the series that I recommend they read, because this novel shows so clearly the harsh environment of the Plains and how strong a community and a family had to be to survive nearly insurmountable challenges.

Thanks!
Judith (Reader in the Wilderness)

Thanks, Judith! I agree, I think this 'children's' book has taught more than anything I've ever read about the harsh conditions of a Plain's winter. I was bowled over by it to be honest. People may be surprised to find it in my top ten at the end of the year... or maybe not if they've actually read it. :-)

Get daily suggestions and guides for earning THOUSANDS OF DOLLARS per day FROM HOME for FREE.
CLICK HERE TO DISCOVER