Some books are easier to review than others aren't they? I haven't the first idea how to start with this next one. It's Letters from the Horn of Africa - 1923 - 1942 by Sandy Curle and edited by his daughter, Christian Curle. It's my first book for the Postal Reading Challenge 2014 which is being hosted by The Indextrious Reader and, as Sandy Curle was Scottish, my second book for the Read Scotland Challenge 2014 which is being hosted by Peggy at Peggy Ann's Post. (She has created a really nice group for this challenge on GoodReads.) I think that's it... it doesn't qualify for the Mount TBR challenge as the book is a library book. 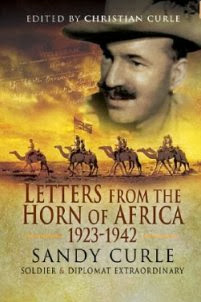 Ok, well Sandy Curle (I think his real name was Alexander but it was only mentioned once or twice and I may be wrong) was born in Edinburgh in 1900. He came from a family of lawyers, obviously not badly off as he was educated privately. Apparently he didn't enjoy school, but was clearly a born soldier as he thrived at Sandhurst (the UK's college for army officers) and came out of there a Second Lieutenant in the Gordon Highlanders. It was 1918 and the end of WW1 and Sandy's first post was to the Rhineland to help clear up after the war. As soon as he could though he got out of there and got himself seconded to The King's African Rifles (K.A.R.) and, aged twenty three, was sent to Jubaland, a disputed area on the border between Kenya (at the time part of the British Empire) and Italian Somaliland, now Somalia of course. The Italians were given Jubaland after WW1 as a reward for siding with the allies in the war and Sandy was part of the force presiding over the hand-over.

From there he proceeded to be moved all over the Horn of Africa. In 1929 he retired from the army and joined the Colonial Service as an Admin. Officer in British Somaliland. His main concern was the ambitions of the Italians, led by Mussolini of course, who it was known had designs on Ethiopia and indeed one of the main events of his career was dealing with the repercussions of that invasion in 1935. In fact there are those who believe that WW2 began with that invasion and not in Europe.

Sandy decided he needed a break from warfare and in 1937 got himself transferred to Tanganyika as a District Officer. Here he was able to lead a more normal life for a while but it wasn't to last and when war broke out again he was back in the KAR reserves as a captain. His main acheivement was the creation of the Ethiopian Irregulars, almost a guerilla band, who led the reoccupation of Ethiopia in 1941.

The letters end there. Sandy finished the war in Kenya. He had a wife in Scotland and a daughter aged, five, that he had never seen as he had sent his wife back to Scotland, pregnant, when things started to get bad in East Africa.

What a fascinating book this was. I won't say it didn't drag a bit in places because it did. Sandy was writing primarily to his father and the correspondence was a bit formal with quite a bit of detail about the army and his job. Despite that the man's personality shines through and he was clearly an old-school colonial officer who took his job and his responsibilites very seriously. I was reminded of my father-in-law quite a lot and he too was in Africa before the war funnily enough - Rhodesia I gather.

The main interest for me was the firsthand account of important historical events. I won't say I was ignorant of them because that's not quite true. I knew of the Italian involvement in the Horn of Africa before the war but not that they, the French, and us the British, had Somalia and Eritrea all carved up between them with independent Ethiopia having such a struggle to hang on to their independance. This way of learning such pertinant facts via someone's personal correspondence, someone who was on the spot and reporting back on a weekly or monthly basis, works extremely well. I now feel much better informed though how much of it I'll retain I'm not sure. Hopefully a fair bit. As always with a book like this you learn that things were not always as black and white as more formal history books would have us believe and for me that's my main reason in reading this kind of book. Not a book you might call 'enjoyable' but certainly very interesting and informative and I'm very glad to have read it.

An interesting bit of history, Cath! I was going to say I'm not going to make the slightest effort to find it, since my editing work provides me with enough non-fiction reading to keep me going, but actually my stepfather might like it. If he can't get it in his local library he could probably get it from yours through inter-library loan! I'm always looking for things that might interest him.

I do like the personal slant on historical events and letters are the ideal source - the contemporary view and as you say things are never black and white!

However, I can't see myself reading this book, not that it doesn't interest me but it does sound detailed and at the moment - and for the foreseeable future I have more than enough non-fiction to read and I imagine it took you quite a while.

My blog's not working properly right now - I can't write posts and am waiting for my computer expert (ie son) to sort it out for me - so don't expect I'll be posting much for now, still it incresaes my reading time.

I have never heard of this one before. I am glad you liked it so much!

This sounds fascinating. There is so much about Africa and how it played into WWII that I do not know, I'm sure I would find this an interesting read.

Geranium Cat: I've just checked and there's, unsurprisingly, just the one copy of this in Devon... the one I have. I'll get it back to the library soon and then if your step-father is interested he can reserve it.

Margaret: The black and white thing is a good lesson to learn and I think keen readers are perhaps more aware of it than those who don't read at all.

It's very detailed and yes, it took me a couple of weeks to read it as I needed to be reading something a bit easier at the same time.

Kelly: I think it's rather an obscure book, very few entries on GoodReads for instance.

Penny: I was unaware of the role East Africa played too, well some of it anyway. It's good to become a bit more informed about these historical events.

Can you imagine being away from your family so long you have never even seen your 5 year old child?!! As an American this is a subject I really know absolutely nothing about. Sadly though I doubt I would be able to make it through the whole book. Bravo to you, Cath, for reading it!

Peggy: It's sad isn't it? He did try to get home but narrowly missed the opportunity several times. And of course travelling from Africa to Scotland during the war would have been fraught with danger.

This looks fascinating, and it's one of the reasons I love reading letters so much: the unfiltered reality of another life so very different from ours. I think letters carry an immediacy that you can't get any other way, and bring the past alive in a unique way. Sandy Curle sounds like he was in the middle of a compelling historical moment, which does make for interesting reading!

Melwyk: He was indeed in the right place at the right time and that was what made his letters so fascinating. The book has whetted my appetite to read more letters and more about Africa too.