I don't seem to be able to leave the crime books alone at the moment. For someone who, just four or five years ago, had hardly read any crime books at all - aside from an early 1990s addiction to Cadfael and a few Agatha Christies and Georges Simenons in my late teens - this is quite an amusing turn around. Of course my habit is being encouraged this year by two crime book challenges and this first book is for one of those, Bev's Vintage Crime Bingo challenge. I'm enjoying this one so much that I have a feeling I might end up reading for all 36 squares on the card!

Anyway, Maigret in Holland is my 5th. book for this challenge and covers the category: A book set anywhere other than the USA or the UK. In this case the setting is Holland of course. 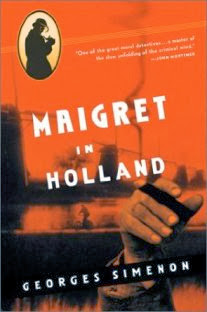 A French professor who lectures on crime has got himself into a spot of bother in a village on the coast of Holland. A man was shot dead and the professor, who was staying in the dead man's house, discovered the gun and casually walked outside to the scene of the crime carrying it... thereby making himself a prime suspect. The powers that be ask Maigret to go and see what's happening although he has no jurisdiction there, naturally. The village is small and insular and everyone know everyone else's business. And there are secrets. The dead man is an ex-sailor who has married and settled down with an academic woman. It's clear the man had itchy feet and liked the company of women a bit too much. A local farmer's daughter is also clearly keeping a secret, as is a young merchant navy cadet. In fact there are too many secrets for Maigret's liking and the question is, how many people were a party to what was going on?

Another brilliantly atmospheric Maigret case. I think Simenon was a clever writer all round but what he was especially clever at, to my mind, was creating atmospheric settings, often bleak areas or perhaps ordinary places in the depths of winter where locals are struggling to survive. He created a sense of place wonderfully and here it's a Dutch coastal village surrounded by dykes, windswept and insular, which Maigret feels has the appearance of a toy village... too perfect by half... and such places, in his experience, have many secrets. And so it turns out to be. This was another case full of human frailty, frustration at domestic situations, and individuals trapped in one way or another. Things people have always struggled with and probably always will, so although this book was written in 1940 it still has a remarkably modern feel to it and still feels relevant. I think I could easily become addicted to Commissaire Maigret and his crime solving capabilities. And that's fine because there were around 75 books and 28 short stories apparently! Enough to satisfy even me, hopefully. 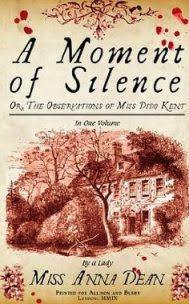 It's 1805 and Miss Dido Kent is the unmarried sister in a biggish family of siblings, a spinster aunt who is very fond of her nieces. One of them, Catherine, has just become engaged to a Mr. Richard Montague but something has happened to mar the girl's happiness. During the engagement party a strange man appeared, said nothing to Richard, but somehow a message was conveyed, and he has now disappeared under some kind of disgrace and called off the engagement. Catherine has no idea what has happened and begs her aunt to come to Belsfield Hall to try to solve the mystery. No sooner has Dido arrived than the body of a woman is found in the shrubbery. No one has any clue who she is but Dido soon discovers that the woman was pregnant. Are the two events connected? Richard's family are a motley crowd and there are various other houseguests as well. Was the woman killed by some stranger or is there a murderer in the house? Dido's investigations into the murder and Richard's disappearance will eventually uncover some very odd secrets indeed.

Some books are just pageturners, they can't help it, and I devoured this in a day or so, unable to put the thing down. It's very Jane Austen-centric in flavour, not quite the same standard of writing of course, but actually not bad and certainly very readable. It's partly an epistolary novel, I would say about a third of the narrative is made up of letters from Dido to her sister, Eliza, and this works very well to explain Dido's thought processes and also to remind the reader what's going on. And there's a lot going on in this book, a couple of plot strands that take a while to sort out for instance but also it's a very much a subtle comment on the plight of women in the Regency period. Especially the unmarried aunt, sister etc. who was relying on the charity of - usually - brothers in order to live. It was rather sad as they were often unpaid slaves at everyone's beck and call and had to put up with all kinds of sly verbal abuse. And I rather suspect that Dido was luckier than many! If I have any complaint it's that I didn't feel it was explained well enough at the start who exactly all the people in the house were. I got a bit confused, but I suspect that's me rather than anything else. All in all, an absolutely excellent read and I plan to read the other three Dido Kent books, which luckily my library seems to have. Can't believe I'm starting yet another new series.......

...goes off to the library and orders two More Books! if you are not careful I shall have to develop a ten step program re visiting your blog ..all I can say is thank goodness for libraries and at least books aren't fattening..well at least most aren't but thinking about certain cookery books perhaps.....

I find that crime books are popping up everywhere lately. They seem to be the current trend. Maybe brought on by the weather?

Before I began blogging I'd read very little crime fiction for years - some Agatha Christies for example in my teens and twenties and then I can't remember many more. Blogging changed all that.

I think you're so right about the Maigret books. Simenon captures that sense of place so cleverly and the characterisation of Maigret is perfect.

I doubt your confusion over who all the people in the house were in 'A Moment of Silence' was just you. I haven't read this book, so I'm generalising here - I often find the introduction of several characters confusing at the beginning of a book and have to backtrack to find out who is who. I think it's because characters are often dropped in casually and developed later on - and I can't tell who are going to be the minor/major ones at the beginning, especially if the book is a page-turner and I want to get on with the story.

I read the first in the Anna Dean books and really enjoyed it. I don't think my library has them though:(

geez maurice! are you really reading all of these or is Peter helping you? lol..sheesh woman!

sorry I am not doing much..down in the dredges hanging on by my fingernails...xoxo

I haven't read any of the Dido Kent series yet, but everyone keeps recommending them...sounds like fun!

Val: Well it could be said that if you're sitting reading you're not out getting some exercise... but I try not to think about that too much. LOL

Kelly: Possibly brought on more by the number of crime book challenges that going around at the moment. I know that's my reason...

Margaret: Blogging did exactly the same to me re: crime books.

I'm glad it not just me with pinning down who people are. But this book was particularly so at the start where the author introduces her characters in a letter and doesn't quite say who they all are. It didn't spoil my enjoyment but I wish it had been clearer.

Peggy: Sorry your library doesn't have these. I've been lucky and grabbed the next two from mine.

Pat: Yes, really reading them all. I assume at some stage I'll slow down. The TV is really dull at the moment so I have more time to read.

Melwyk: They are huge fun. Well worth trying.

oooh, a Maigret book with a professor! I may get drawn back into to reading a Maigret mystery....

Bev: The ones I've read this year have varied but this one was particularly atmospheric I thought.