When I finished Carl's Science Fiction Experience earlier this year I made the decision to try hard to carry on reading some sci-fi throughout the rest of the year. I don't know why but it kind of falls by the wayside as I get my teeth into his Spring, Once Upon a Time challenge and return to the crime fic that I really enjoy these days. It's a real shame because science fiction was my first love and having rediscovered the joys of it I need to make more of an effort. Reading What Makes this Book so Great by Jo Walton has helped because it's a walking reference book of sci-fi recs and info about the genre. One of her favourite authors is C.J. Cherryh. I've only read one book by her, Goblin Mirror which I thought was 'ok' but not brilliant. Time to give her another go? Yes. I have a two book omnibus on my tbr pile which includes Cuckoo's Egg and Serpent's Reach. I chose Cuckoo's Egg for my first May read. 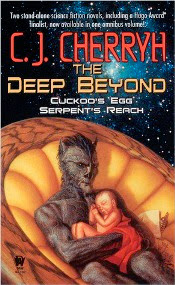 Duun is Hatani, a warrior come judge come mediator class of beings on his planet, Shanoen. But, sometime in his past, he's been badly scarred and keeps well away from civilisation. One day a baby is brought to him but it's a baby like no other. On his planet the population are tall and powerful with grey fur, they have claws, sharp teeth and ears that fold back. The child handed to Duun has no fur and is pink in colour: it's a human child. It's Dunn's task to bring the child, named Thorn, up. He decides to take the child into the country, to a large house surrounded by woodland where the people of his planet will not see him. He also makes the decision to turn the boy into Hatani like himself. It involves long, arduous training some of it cruel and desensitizing. How will Thorn cope? And when the training is complete will the people ever accept him as one of them?

Well, this book is only 200 pages long but it packs quite a lot in and gives the reader a lot to think about. Could an alien with a completely different outlook on life to ours, different culture, different attitude to emotions and so on, possibly bring a human child up to think he's one of them and assimilate successfully? At what age will the child realise he's 'different'? How will he cope with that? Not just the realisiation that there is no one else on the planet who looks like him but also that the rest of the population is shocked by his appearance. Because Cherryh has invented a people who are pretty xenophobic here... not just as regards outsiders but they're also not happy around people who are badly disfigured as Dunn is.

The other thing to consider is what does the father/son relationship become when they are not of the same species? The old 'nature or nuture' argument of course. In this case will Thorn's human nature surface or not? Will he simply accept things which feel contrary to his nature? When will he start to wonder where he came from and what he's doing here? And then there's puberty...

As I said, there's a lot to consider here. It's not a very plotty kind of book, but it doesn't need to be. I rather like a quiet sort of book from time to time, that just makes you think outside the box. For me this is one of the great pleasures of science-fiction, the way you have to dig deep and and consider issues properly. Plus, on a very basic level, I really do love alien planets and alien people who don't behave the way we do or look like us. Terry Pratchet said that it's hard to be a bigot when you read science fiction and I truly believe this to be so. You're forced into considering things from points of view which are very different to your own. Human traits which we might be quite proud of are not necessarily so great when seen from the point of view of someone not of this planet who has other ideas about what's laudible or honourable or just plain right or wrong. I wish more people would read in this genre, I genuinely believe it would make for a more thoughtful, broad-minded, tolerant population.

This book qualifies for Bev's Mount TBR challenge and is my 15th. book for it... making me still a book or two behind. Need to do better.

I read this book many years ago and loved it. I am not sure I considered or thought about as much as you have, reading it - I was 21 or so when I read it! lol I have often thought I would enjoy rereading it again, and I see now I will. I really enjoyed seeing how the questions Cherry asks promotes thinking in you about how alien is a word that can apply anywhere, and how science fiction helps us to not be xenophobic. I am interested in that nature vs nurture question too. I wish I wrote notes to myself about books from back then! lol That's what our blogs are for, aren't they?

I have to say Inever heard of this book, though I know the author..even read something of hers eons and eons ago .but don't ask the title I don't remember! that cover sure is interesting .. you are just a reading machine this year! :o)

Susan: I didn't think much about books when I was reading at 21 either, Susan. Tell the truth, I was a young mum then and probably was not reading very much. lol! I think some books say a lot to the reader and others don't. This one spoke volumes, so to speak.

Pat: She's written loads, some of it fantasy so I expect you have read something by her at some stage. I love the cover of this one too. Whether she would ever be a favourite author of mine, I'm just not sure, but this book was not bad.