A couple more mystery novels today, one straightforward, the other a mix of fantasy and crime.

First up, A Fete Worse than Death by Dolores Gordon-Smith. This is my book five for the My Kind of Mystery which is being hosted by Riedel Fascination. 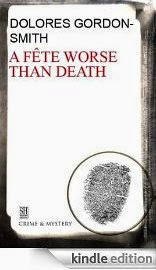 Jack Haldean is an ex-world war one fighter pilot who now writes crime novels for a living. He's staying at Hesperus, in Sussex, the country house owned by his uncle and aunt, and is attending a fete in their grounds with his cousin, Greg. He suddenly spots a man he served with in the RFC, Boscombe, and things are said which remind Haldean of how much he disliked the man. Some while later, still at the fete, Boscombe is discovered dead in the fortune teller's tent. The case is a real conundrum and Jack, always fascinated by real-life murder cases, begs the police detective in charge, Superintendent Ashley, to be allowed to help solve the murder. He soon lives to regret his enthusiasm as his family and friends come under close scrutiny. Worse still, he has to investigate a notorious event of the war and put himself into very real danger.

Oh, I liked this one very much indeed. It very much has the flavour of 1920s England, all country lanes and garden fetes, but also a very real sense of the horrors and senseless carnage of the war... and the cameraderie that existed between the men who fought. Jack Haldean is an interesting amateur detective, and I liked the way he realistically lost his taste for the thrill of the chase as regards the crime when it started to involve people he knew and loved. It was difficult for him and the author made no bones about depicting that. I also liked that the offical investigating detective was not an idiot... that made for a nice change too. The crime aspect itself I found interesting and absorbing, particularly the WW1 slant. All in all, a good start to a 'new to me' series. I went off immediately to grab the second book, Mad About the Boy, for my Kindle, for the princely sum of 84p from AmazonUK. Bargain.

Next up, Death By Silver by Melissa Scott and Amy Griswold. This is also a book five but this time for Carl's Once Upon A Time VIII challenge. 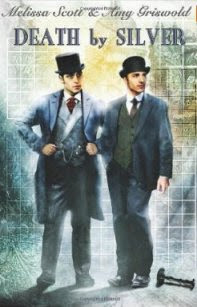 Ned Mathey is a newly qualified metaphysician in an alternative Victorian London, who is trying to establish a new practice. He's called in to help one Edgar Nevett who thinks he has a problem with cursed silver and wants Ned to see if it so and remove the curse if there is one. Ned is reluctant. Edgar is the father of Victor who was at shool with Ned and as a prefect and being much older than him bullied him mercilessly. But a job is a job and Ned goes and passes the silver as uncursed. Not long after, Ned gets word that Edgar has been murdered and the cause is likely a cursed silver candlestick. Luckily, the police take Ned's word for it that the silver was not cursed and a murder investigation ensues. Ned enrols his close friend and occasional lover, Julian Lynes, and together the two try to solve what is a very tangled web, made more difficult by the fact that Victor, the school bully, is the one who wants them to find out who did it. Can Ned and Julian put aside their hatred of Victor and solve the murder without prejudice?

Well this one was a bit different. Firstly, it's a solid crime story told amid a world where magic and its use is an everyday occurance. People charm household objects to make housework easier (yes please!), use love potions, and use magic to do away with people. The other difference is that Ned and Julian are gay and although this is against the law, as it would have been in real Victorian society, the authors don't hesitate to bring it into the story and use it as another author might use a straight romance. I found it refreshingly different... others might think it a little explicit. Just a word of warning. There are also quite a lot of descriptions of some rather nasty bullying. Again, it might not be to everyone's taste. If you're OK with that then there really is quite a good crime yarn here. I must admit I suspected the culprit from the start but it didn't spoil my enjoyment. I liked the world building, magic in a Victorian setting is always attractive to me, and I really liked Ned and Julian. I particularly liked the misunderstanding element of their romance. Possibly I would have liked a few less 'gottens' but it seems some American authors never are going to learn that we don't say that word over here so I'd better get over it. I'm hoping there might be more books about these two but as the book has only been out a year it's probably too early to know.

Brilliant reviews..and both are going on my list (it's a good job books are calorie free that's all I'm saying...)

Can I confess "gotten" drives me bonkers too...it jars doesn't it.. well I shall try and emulate your resolve and attempt to get over it too...

A Fete Worse than Death appeals to me more than Death by Silver, although I do like the idea of magic charms to help with housework! But the 1920s is a fascinating period for me.

'Gotten' grates with me too!

Going back to one of your earlier posts, I found The Red House Mystery on the shelf in our local library - thanks for the recommendation! I don't really want to add to my TBRs but just can't help myself it seems.

Glad I'm not the only one who's fussy about 'gotten'. I haven't been successful so far in getting over it I must say.

Margaret: Yes, Death By Silver would not suit all tastes I freely admit that. I agree about the 1920s and seem to have been reading a lot from that era recently, not necessarily on purpose, it just seems to have happened. Although possibly the Vintage Crime challenge partly accounts for it.

You too? We need to form a 'gotten' support group I feel.

Oh that's good! I don't think you'll regret grabbing that one as it was a thoroughly good mystery and a charming read... as you would expect from A.A. Milne.

They both sound good but I think I would enjoy A Fete Worse than Death the most. Intriguing mix it sounds like with the war and the murder. I'll go see how much it is here in the States!

The Fete one sounds pretty good! So it looks like you are on a good mystery kick right now!!!

Peggy: A Fete Worse than Death is such a good read. The AmazonUK price for the book is £2.60 so that's a little cheaper than yours. It's book 2 that is really cheap (84p).

Pat: I *should* be reading fantasy and I can't get off the crime books! LOL. (I am reading a Terry Pratchett now though and that'll give me 6 books for OUaT.)

Good to hear that you liked A Fete Worse than Death. I have that book and another one by that author and wasn't sure I was going to like them.

Death by Silver does sound like a good one for the Once Upon a Time challenge, mixing mystery and fantasy.

Tracy: I thought Fete was a good start to the series. I have book 2 on my Kindle so will read that fairly soon.