When I announced my intention to do The Southern Lit challenge again this year, Kay from Kay's Reading Life (who has made a welcome return to book blogging) suggested that the Penn Cage books by Greg Iles, which are set in Mississippi, might fit the bill. The first book is entitled The Quiet Game and luckily I was able to reserve a copy from the library. 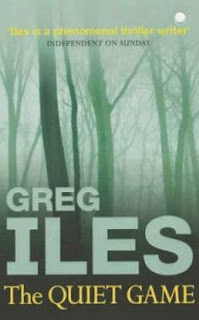 Famous writer and prosecuting attorney, Penn Cage, has recently been widowed. He has a young, four year old daughter who is traumatised by the loss and he decides to take her home to his parents' house, where he grew up, to heal. His home town is Natchez, an antebellum city, in the state of Mississippi. On the plane he meets Caitlin Masters, unbeknown to him, a journalist working for a newspaper in the same town. The lives of these two are to become inextricably entwined.

Arriving home, Penn senses that something is not right with his parents. Reluctantly, his father, a doctor, eventually tells him that he's being blackmailed by Ray Presley, a killer and ex-policeman with a finger in many crooked deals. Penn sets out to put a stop to this, only to discover connections to a case some years ago when the local big-wig, Leo Marston, tried to send his father to prison for malpractise. Penn had been dating Leo's daughter, Livy, at the time and Penn had always assumed that Leo's motive for doing this was to split Livy and Penn up. Her father having grander plans for her than to marry a local doctor's son.

When the murder, in 1968, of a local black factory worker, Del Payton, is also rumoured to be connected to Leo Marston, Penn decides, with the help of Caitlin Masters, that it's time to bring him down. But how to do this? Things are further complicated when Livy, newly separated from her husband, arrives in Natchez. What is she doing there?

It's a long, long road Penn has embarked upon. It's going to bring tragedy and death and will involve crooked dealings in the highest echelons of political society and the FBI. More than once Penn is going to regret ever becoming involved but he promised the family of Del Payton that he will find out what happened to him and, whatever happens, is determined to keep that promise.

This was a book that was amazingly good on 'setting'. I did wonder, before I started, exactly how 'southern' it would feel. Answer: 'very'. The town of Natchez and the state of Mississippi really came alive and the historical detail was fascinating. I found out a lot about the treatment of the black population in Mississippi in the 1960s and it was interesting the way the author brought in various politicians such as J. Edgar Hoover, and there were mentions of Bobby Kennedy and Martin Luther King of course. All excellent.

But... I was at least 200 pages into this book before I really felt that I had to finish it. Before then, if I'm honest, I found it rather rambling and was getting a bit tired of the author indulging in a bit of male fantasy writing. Ie: two stunningly gorgeous, 'perfect' women who of course found the narrator irresistible, descriptions of one of them in a see-through blouse and so on and so on. I do realise that as a 60+ female reader I'm not the target audience for this book, it's probably aimed at other men and that's maybe what they like to read. But it just makes me sigh that so many male authors just can't seem to bring themselves to write about women as they really are rather than invent these perfect fantasy women. Oddly, the only women in it who felt, to me, like real people were two black characters, Ruby, the maid, and Althea Payton, the murdered man's wife. Penn's father was a very strong character but his mother? I had hardly any sense of her at all. She felt like a shadowy presence in the background to be honest.

It's such a shame because this book has the sort of cracking storyline that would hold up without all that sexual fantasy stupidity. The plot was certainly the reason I kept reading. I'm not really a political/legal thriller reader... not my thing at all normally... but the story had so many twists and turns and so much going on that for me it eventually turned into a real pageturner. I couldn't stop reading and got through the last 400 or so pages in a couple of days. Not until towards the end did I have much of a clue what was really going on. Until then it was just a huge rollercoaster ride, including a night-time river escape that was about as exciting as anything I've read. Hugely entertaining.

Now of course I can't decide whether I want to read more in this series. I'm not sure I want more of the sexual fantasy writing but having read the synopsis for the next book, Turning Angel, it does sound rather good. I'll think seriously on it and perhaps see if my local library actually has the book. (I've now checked and they do so I'll wait for it to come back in and borrow it.)

The Quiet Game is my first book for the The Southern Lit challenge which is being hosted by The Introverted Reader.

I don't think I'm the target audience either and at over 600 pages that's a lot of time to spend reading it. And if it only got going after 200 pages I would have been itching to read another book before then. The political aspect is a turn-off too (as well as the male fantasy writing). So it's good that after an unpromising start it turned into a pageturner. Great review - I'm just not sure I want to read it though.

I'm so glad you tried this one. Yes, there is a bit of that sex fantasy business and honestly, I had forgotten about it. LOL

If I had to give you a nudge, I'd say you could skip the next two - TURNING ANGEL and THE DEVIL'S PUNCHBOWL. But, do read the trilogy Iles is writing right now. NATCHEZ BURNING is the first and THE BONE TREE will be out in the US in April. It's the history that I'm loving. Not that it's pretty - not at all. Shameful and awful. Important to remember though.

wow you stuck it out longer than I would! lol generally if I am not hooked by 100 pgs.. it's closed and gone on to another book! Good to know you were glad you read it and liked it though.

I would have gave up long before you. I am not much for sexual fantasies...

Margaret: I completely understand your reaction. I'm not sure I've ever been quite so ambivilent about a book. But in the end I was actually quite glad I persevered as the book had more plus points for me than minus.

Kay: Luckily I think it's quite easy to forget the bits we don't care for in a book. LOL!

Now that I've found that my town library has Turning Angel I think I will read that one. If I'd had to pay to reserve it I'm not certain I would. I agree, the historical aspect is excellent. As you say, not pretty but important, especially for someone like me from overseas to know and read about. I've given it to my husband to read now and I'm very eager to hear what he makes of it as he really enjoys books set in The South.

Thank you for reccing a book which I didn't automatically love but which really made me think about what I was reading. I might not have continued with it if it weren't for the fact that I know you have good taste in books and I sensed there would be much more to it if I gave it a proper chance.

Kelly: I normally give up long before that too, but something told me I should carry on and I'm glad I did.