Goodness, I haven't posted since the 3rd. This is all down to reading the longest book in the history of publishing... well... not quite... but it felt like it at times... and also being a bit busy with the garden at the moment. So, slightly shorter book reviews are the order of the day and this'll be a two in one post. First up is Jonathan Strange and Mr. Norrell by Susanna Clarke. 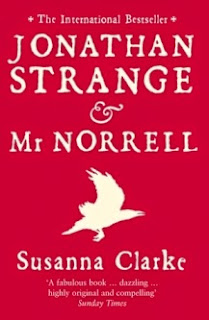 It's the early 1800s and magic is something which has been lost to England... there are still theoretical magicians but no one has practiced it for hundreds of years. In York some local theoretical magicians decide to visit a Mr. Gilbert Norrell who, it's said, knows more about magic than anyone in England and has the most magnificent library on the subject. The visit is not a success and he decides to teach them a practical lesson. One night he makes the statues and grotesques in York Minster come alive and talk. It naturally causes a sensation and Mr. Norrell decides to move to London and be the one responsible for bringing magic back to England. It proves to be a difficult task but eventually a couple of hangers-on manage to bring him to the notice of the powers that be. Norrell's idea is to be the 'only' magician in England and takes steps to stop others taking it up. He's unable to stop Jonathan Strange though and eventually the two men come together to be England's only practicing magicians. One of Mr. Norrell's first acts of magic was to raise the wife of a politican from the dead and it's the repercussions of this which will shape the future of the two men and those of their loved ones and followers.

It took me about two weeks to read this mammoth book (it's just over 1,000 pages long). I wanted to read it because the BBC's dramatisation of it starts on Sunday night and I wanted to have read the book before I saw it. I find this helps with understanding what's going on as these film makers tend to cut so much. Anyway, this alternate reality fantasty/history tale is a remarkable piece of work and an astonishing achievement on the author's part. Really amazing. So why do I feel a bit ambivilent about it? I'm not sure. On the one hand I found the idea of magic being a reality in Regency times totally beguiling, some of the ideas are intriguing and mind-boggling. BUT I know that quite a few people have given up on the book about 200 pages in. And, weirdly, for one who did make it to the end, I completely understand why. It rambles. And it rambles. And then it rambles some more. Scores of long footnotes in tiny, tiny writing try your patience when you have 62 year old eyes and are struggling to read them. The author has no notion of conciseness and I'm afraid I thought more than once, 'Oh, please get on with it!' And yet... I wonder if it would be quite as remarkable a book with a couple of hundred pages edited out. Part of me says 'Yes!' Part of me is not so sure. For many, its length is actually part of its appeal and I do understand that. Anyway, regardless of all this indecisiveness, I am glad I read it and if, as I hear rumoured, there's a sequel on the way I shall read it. I gather it will be about two of the minor characters in JS&MrN... Childermass - Norrell's assistant - and Vinculus, a 'maybe' magician. I would love to read more about Childermass as I thought he was one of the most interesting characters in the book and not made enough of. I'll just add that I did enjoy the historical elements of the book. There's a lot about the Peninsula War, Waterloo, King George III and how his illness was treated and so on. All fascinating stuff.

Jonathan Strange and Mr. Norrell is my book 5 for Carl's Once Upon a Time IX and my book 12 for Bev's Mount TBR 2015 challenge.

Next, The Mysterious Affair at Styles by Agatha Christie. 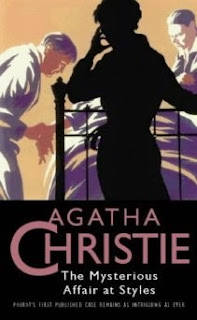 Old Mrs. Cavendish has recently married again and her new husband is a younger man, Alfred Inglethorp. Her two adult sons and various others who live with her in her large house, Styles, are horrified and all hate the new husband, considering him to be a gold digger. When the old lady dies with his name on her lips the family assume that he has poisoned her but has he? Most of the people who live at Styles turn out to have a reason to want her dead and a method of doing it. Captain Hastings was present when she died and suggests calling in a friend of his, an ex Belgian detective and refugee from the war (WW1) who is staying in the village, one Hercule Poirot. Together, Hastings and Poirot investigate this very complicated 'locked room' case although Hastings starts to wonder if his friend has lost some of his brilliant deducting ability with age...

This was Agatha Christie's very first book and also Hercule Poirot's first appearance. I was keen to read it as she talks quite a bit about how it came to be written in her autobiography: it was as a result of a bet with her older sister. Her main regret about Poirot was that she felt she'd made him too old in his first outing as he would have been well over a hundred in the last book! As a first book I found it to be surprisingly readable. You tend to give a bit of leeway with first books, especially given that Christie was only in her early twenties when she wrote it, but it's not necessary with this. It's good. Hastings is the first person narrator and his character really leaps off the page. I love his delusions of cleverness when it comes to detective work and his weakness for women which he doesn't seem to be aware of. I think Agatha Christie knew men well as none of hers are perfect, all have weaknesses and failings. Same for women... she knew how to portray all human failings with deadly, pin-point accuracy. She threw no punches! Anyway, enjoyable and fun to link it with Christie's real life as a despenser in WWI. It's clear she knew all about poisons. There will be more books by Agatha Christie as this year progresses.

I'm glad you enjoyed The Mysterious Affair at Styles.It's been several years since I read it but I remember thinking that David Suchet's portrayal of Poirot matches the description of him in this very first Poirot book.

It's been even longer since I read Jonathan Strange and Mr. Norrell, so thank you for reminding me of the story. I do remember that there were times I nearly gave up - and I did give up on the lengthy footnotes, just scan read them. I'm looking forward to the TV version, but I'm not sure my husband will like it - you never know though he may surprise me!

I was one that tried not once, not twice but three times to get thru Jonathan Strange..I may have even gotten to about 380 pages but as much as I love "old England" I just couldn't handle it any more. I am so proud you made it to the end!!!! What with my company and a week away I am only about to finish my 614 page Dan Simmons book Fifth Heart. So I go from 6 or 7 books to one.. two if i am lucky for this month! lol

I'm impressed that you stuck it out with the first book. I remember wondering if I should read that one, but I'm not terribly fond of that time period. Give me the Victorian Age - dank and Jack the Ripper-ish. Think I'll pass and if the TV adaptation makes it here, might watch that.

The Agatha Christie book - read it years ago. I love Captain Hastings. I need to reread this one just to see how it all began again. Look forward to hearing about what other AC books you decide to sample.

Cath, I had never even heard of Jonathan Strange until the BBC show. I would not have read it if I had. Kudos to you for doing so! We watched the show the other night and I have to admit to going to bed in the middle of it!

Any Agatha Christie is a good read!

Isn't Agatha good :o)
I've just started reading "The Golden Age of Murder" by Martin Edwards and I believe there may be quite a bit of Agatha related material in there. Either way the first chapters are very readable and I'm enjoying it.

I'm wondering if your husband likes the TV version of JS & Mr. N? Mine is not at *all* sure!

Pat: I think I know more people who couldn't get through it than did. LOL!

You're in good company as I've only read 3 books this month... though Jonathan Strange *is* like 3 books in length! LOL

Kay: I think for many people the TV adaptation is enough, and judging by last week's it's very true to the book.

I was unprepared for Hastings' delightful narrative 'voice' in the Poirot books. Huge fun.

Peggy: Yep... I can well understand that the series is not for everyone. I think it may even be a little too weird for my husband and he reads both fantasy and sci-fi.

Val: Agatha is wonderful. After reading her non-fiction I now think she's even more amazing.

I've just buckled and ordered myself a copy of the Martin Edwards book. Lost cause...

lol ..me too ...it was that darn "look inside" option and then when I got started I didn't want to stop...ha ha total lost cause :o)

Kay we watched JS & Mr. N together and at the end he said I don't think I'll watch any more! As I expected ...

Margaret: I think it was me who asked whether your husband likes the TV series. Mine is ok with it but not exactly crazy about it either. LOL!