Happy September to everyone reading this! My favourite time of year, autumn, is almost here and I couldn't be more delighted. The evenings are drawing in and the last few weeks have been cool and comfortable. I've been busy a lot of the summer with family and the garden so book reviews have been few and far between. It's been nice as I do enjoy my grandchilden immensely and we've had a lot of fun spending time with them this summer. But soon they'll be back to school and normality will return and I'll get back to doing a few book reviews... especially now that R.I.P. has begun.

Anyway, this past month I've read four books again and these are they.

38. The Wrath of Angels - John Connolly 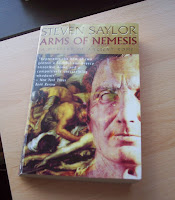 The hideously disfigured body was found in the atrium. The only clues are a blood-soaked cloak, and, carved into the stone at the corpse's feet, the word Sparta . . . The Overseer of Marcus Crassus's estate has been murdered, apparently by two slaves bent on joining Spartacus's revolt. The wealthy, powerful Crassus vows to honor an ancient law and have his ninety-nine remaining slaves slaughtered in three days. Gordianus the Finder is summoned from Rome by a mysterious client to find out the truth about the murder before the three days are up. (Blurb from Goodreads.)

Well, gosh, this was a bit of a cracking read. I enjoyed the first book in the series, Roman Blood, very much indeed. I didn't imagine that book 2 would surpass it in excellence... but it did. Shifting the action from the city of Rome to the Gulf of Puteoli worked a treat and what you get from that is gorgeous descriptions of the coast of Italy and frequent mentions of Vesuvius brooding over the scene. Wonderful. Once again, as with the first book, the plight of Roman slaves comes right to the fore. More so in this book as the author portrays what it's like to be a house-slave and, in one very memorable scene at the beginning, the daily horror of being a galley-slave on a ship. Apparently, just about the worst job any slave could find himself doing. The mystery was excellent... I decided who the culprit was fairly early on and was completely wrong. Naturally. All good fun. I'm really looking forward to reading more of these now - I'm finding it rather interesting discovering more about Ancient Rome and the Romans... both in Rome and here in Britain.

So, four very enjoyable books read in August. I loved all four to be honest so I'm not picking a favourite for once. Very nice to have a reading month where all of my books are very good. Hope September is equally as satisfying.

so... it sounds like you are on to yet another series? (Roman Blood?)

I have to relook at your review of the John Connelly book.. like I need more on my wish list ..heh.

omg! are you serious about "having to start at the beginning of those Connelly books?!!!!! Do you know how many there are???!!!!! argh!!! I do have to think about this because I like flawed detectives lol

Those times with grandchildren are so precious!

It's good when you can't choose a favourite - no duds!

I really want to start reading Steven Saylor's books - are they stand-alones d'you think? I have one book in the Roma Sub Rosa series, but it's no. 8.

Happy RIP reading for September - I'm only going to sign up to read one book for RIP this year, as my book group read is Adam Bede and for the Classics Club spin it's The Old Curiosity Shop, both huge books. But you never know I may get bored with those! :)

As always, enjoy seeing your reads. It's delightful having more time with grandchildren.

Pat: Yeah, yet another new series, lol. Never thought I would be interested in Ancient Rome!

To be honest I started the Charlie Parker series at book 2 and it didn't matter. One of these days I need to go back and read that first one. lol Not really sure they would be your thing but they are excellent.

Nan: You are so right. They grow up so quickly... my grand-daughter is 15 already. Doesn't seem 5 minutes since she was the same age as your grandkids.

Margaret: It was so nice to enjoy all my books equally last month.

Yes, they are standalones. Plus, it seems they swap about timewise. Book 3 takes place before book 2 for instance. So reading them out of order is not going to make much differance.

Good luck with RIP (and those two other huge books...)

Penny: Thank you. Our summer is always full of the grandkids and that's nice as one day they'll have grown up and will not need us oldies to look after them. It makes me feel sad to think of it.