My first book for September is a romance set in my home county of Cornwall. I don't read this sort of thing very often but I spotted it in the library, saw the magic word 'Cornwall' on the cover and that was it... home it came. The book is Little Beach Street Bakery and it's by Jenny Colgan. 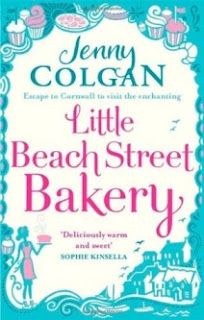 Polly's life disintegrates around her when the business she's running with her boyfriend, Chris, collapses and they're declared bankrupt. Chris takes it very badly and the couple split up leaving Polly with no job and nowhere to go. She sees a flat for rent in Cornwall and on a whim decides to move to Mount Polbeare which, like St. Michael's Mount, becomes an island twice a day with the movement of the tides. Her best friend thinks she's mad but Polly needs to get away and re-evaluate her life.

The flat is terribly shabby but the view out to sea is amazing and it's a place where Polly can regroup and find her feet again. The island itself is a quiet haven although the tourist season is fast approaching when things will get much busier. Polly makes friends with some local fishermen and one day happens to bake some bread for them. Word gets out that she's a good baker but it brings her into conflict with her landlady who also owns the local bakery. The problem is that the bread for sale there is bought in and not that great whereas Polly's bread is home-made and delicious.

One of the fishermen, Tarnie, is clearly interested in Polly, but so is an American, Huckle, living in a remote cottage on the mainland and trying to get by by keeping bees and selling the honey. Having just split with Chris, she feels this a complication she doesn't need. What she does know is that her very limited finances will not last and that she needs to find a job. But what can she do?

Well then... as I said I don't read much of this kind of book, commonly known, I suppose, as 'chick-lit'. Not a term I like much to be honest as it feels a bit derogatory, though I'm not certain why I feel that way. Perhaps because I don't feel like a 'chick'. LOL! And anyway, in Cornwall if someone uses the word 'chick' they're more likely to be referring to a child. I digress.

The book is quite a cosy read I suppose, but it depends on how you read it. Polly loses her business and her relationship at the same time. Not at all cosy. Her former boyfriend and business partner would not communicate with her when it became clear the business was going belly up. He's a pain in arse in fact. He took his misery out on her and she struggled with it for a couple of years. Also not cosy. Information is fed to you about this throughout the book and you can't help but feel she was well rid of him.

The place she moves to is a bit like St. Michael's Mount in that it's cut off twice a day by the tide. It's not identical though as the village on the fictional island is much bigger, and reminded me more of Sennen Cove, being built on a steep hill. Whatever, it really took me back to Cornwall and that aspect was beautifully done. I could smell the sea, feel the breeze on my face, see and hear the fishing boats in the harbour and so on. The author doesn't prettify life for local people in Cornwall though. Yes, the surroundings are gorgeous but making a living is hard. People often work two or three jobs, property is expensive and tragedies happen amongst the fishing community. The elderly find it particularly hard to survive too.

Polly's bread baking habit is a delghtful and fascinating part of the book. I don't bake bread myself but know someone who does and it was really interesting to read about and follow her baking exploits. And at the back of the book are a selction of recipes for anyone who wants to give it a try.

Any negative points? Not really. The book was pretty much as I expected. I wasn't crazy about the two new men in Polly's life and I also wondered how many parents in the 1980s called their daughters 'Polly'. Surely it went out of fashion in the 1950s and has not returned... But that's just me nit-picking. The book was enjoyable, had good sense of place, and was not at all as cosy as one might think given the genre. It also turns out it's book one of a new series and book 2, Summer at the Little Beach Street Bakery is just out. I shall grab it at the library if I see it and might investigate other books by Jenny Colgan.

awww...sometimes the break from our normal reading is a good thing. I had to laugh when you said "the magic word: Cornwall" made you pick it up to read. I am sure you know MY magic words! London, 1800's, Cornwall, or any name in England, Scotland or Ireland lol So funny when one of the words shows up while reading the inside flap that it triggers us to "want to like" what it says lol..

so now we are Sis's right to the "inside flaps" or back of the books!! lol I bet there are many of us that have those "trigger" words!

I don't like the term 'chick lit' either - it is derogatory, I think, a bit like people decrying crime fiction - as though these books are not what you 'should' be reading! It sounds a good book with good descriptive writing and realistic too. I make bread, but I cheat, using a bread maker! I've tried making it by hand but the bread never rises properly!

Pat: They were kind to me and put 'Cornwall' on the front so I didn't need to search for it. LOL!!! But yeah, a break from your normal reading is a good thing and I was really glad I picked this one up. Such a refreshing 'feel-good' kind of a read.

Margaret: I think it's derogatory too, I mean who calls women 'chicks' these days! Exactly... all too often I see articles where the writer is looking down on crime books, or science fiction or romances etc. Someone had a go at Terry Pratchett's books the other day. It's book snobbery and says more about the writer of the article than it does about those of us who like to all kinds of books... not just what these people think we 'should' be reading.

My son-in-law makes bread with a great deal of success. I'll cook most things but have a tendancy towards a sore neck and shoulders so I think bread making would be step too far. I too would happily use a bread maker. :-)

I have to check into this series! I love a book with a good sense of place. Especially when it's such a lovely place! Hope her books are available here.

Peggy: The sense of place in this book is very strong and yes... Cornwall is quite lovely.