My fifth book for the R.I.P. X challenge is Lolly Willowes by Sylvia Townsend Warner. 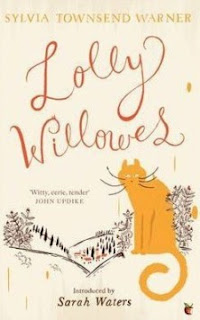 Laura, known as 'Lolly', Willowes is a young woman utterly devoted to her father. Unmarried with two older brothers to whom she is not particularly close, Laura and her father have been inseparable since the death of her mother. When he too suddenly dies it is decided for her that she should go to live with her older brother, Henry, and his wife and two children in London. Laura acquiesces without too much of a fight though she's not sure if it's what she really wants.

For the next twenty years Laura's life is that of the maiden dependent aunt. Her brother's family are not unkind but they take for granted that she will be an unpaid child minder and housekeeper. She adapts to London life quite well even though her preferance is very much for a quiet life in the country. But there is no returning to that as her other brother, James, and his wife now inhabit her childhood home.

Then one day Laura stops to buy some chrysanthemums in a florist shop. Questioning the shop owner she discovers the flowers have been grown in the Chiltern hills in Buckinghamshire. Straightaway she visits a bookshop and picks up a guidebook to the county. She studies it carefully and decides to leave her brother's house to go and live in a village she likes the sound of, Great Mop. There is some resistance to her plan, naturally, but Laura is determined and takes up lodgings with a Mrs. Leak.

The village is an odd one. It is undoubtedly very beautiful and exceedlingly peaceful, set amongst rolling hills and wooded valleys. But the people are not terribly friendly... nor are they precisely hostile... they're just rather indifferent. They go about their business and that business never includes Laura. Which suits Laura down to the ground because, after twenty years of being at everyone's beck and call, what she really wants is to be quiet, alone, to go unnoticed.

And so it goes for quite a while until her nephew, Titus, announces that he plans to write a book and in order to do so is going to come and live with Laura in Great Mop. Laura's rural idyll is shattered. Titus is popular in the village, a 'character'. He likes to acompany her on her walks and gets her to help with writing up his book and so on. Laura is once again at the mercy of 'family'. What can she do to solve this problem?

This might not seem like an obvious choice for the RIP challenge but the last third of the book proves that it very much is, albeit in a much more subtle, satirical manner than your more obvious 'in your face' horror story. The countryside is the star of the show here, and what may or may not go on in the woods and fields that ordinary mortals have no knowledge of. It reminded me strongly of supernatural stories Algernon Blackwood wrote about the Canadian backwoods, all beautiful descriptions of wooded valleys but with an underlying sense of the mystical and unknown. Very clever.

Of course reality is never far away. Laura knows this because she's had to live the 'real' life of a dependant relative for twenty years and can never quite get rid of the feeling that it will catch up with her eventually, which of course it does. It's not that her family are cruel, in fact quite the reverse, the problem is that Laura's life is not her own. She's living it according to her family's expectations of what a maiden aunt should be. It was an extremely common story just after World War One when this story was set. So many men were killed that there was a surplas of single women, and for women of Laura's class a career, 'earning your own living', was out of the question. You went to live with relatives and said relatives thought that you ought to think yourself lucky. I thoroughly enjoyed reading a tale of a woman who decides to break the mould and in such an unusual way to boot.

In my library book copy the introduction is written by author, Sarah Waters. I read that after I'd finished the book, as I often do, and found that an interesting and informative read. Sylvia Townsend Warner was clearly a fascinating woman, breaking the mould herself by living with a female partner for forty years until her partner's death. Not only would I like to read more of the author's fiction, I'd also like to read more about her life... I believe there are diaries available and so forth. Always a good thing to discover yet another reading tangent to go off on: you just never know where it will lead in my experience.

it generally works out well when "one thing leads to another" in books!! So you may now be on a new tail of enjoyment!! I hope so!

Gorgeous review , articulate , informative and very inviting.
It was a real pleasure to read
and of course I'm now quite intrigued to know what happened you wretch ...:0)

Well, now I'm intrigued - wondering how she broke the mould. And it's set in the Chilterns (at least in part) where I used to live, which makes me want to read it all the more. I'm going to see if my library has a copy. (funny verification to prove I'm not a robot!)

Pat: It does generally work out well when one thing leads to another in books. It's never a journey in vain in my experience. Exciting! lol

Val: Thank you, m'dear. It's an intriguing sort of book...

Margaret: I'm thinking that if your local library doesn't have it you should be able to reserve it online from your county one, which is what I did. The descriptions of the countryside should appeal to you I would think. They were so good I even added the book to my British Countryside shelf on Goodreads, which was really intended for non-fiction.

I want to read it too! I'm hoping I can get the book at my library. I like the cover too.

One of my favourite books. STW's diaries are also very good & there are several volumes of letters I haven't read yet. All her fiction is quite different in subject & style.

Margaret: I forgot to say that the word verification thing is not active. I don't know why Blogger has suddenly decided to show it regardless on all Blogspot blogs but if you ignore it your comment should go through without a problem.

Peggy: I think it might be your kind of thing so I hope you enjoy it if you decide to read it.

Lyn: Thanks for recommending the diaries, I wondered if they were worth reading. I checked the library for more by her yesterday but nothing. I shall have to decide which ones I would like to read and reserve them online from other libraries.

I often read a book introduction after I read the book as well, Cath - or need to go back to it when I'm done, especially when it is a good read, which this one seems to be.

Cath, my library does have a copy in another branch, so I reserved it and I picked it up yesterday - now to read it. :)

Penny: I find the intro often gives away far too much of the book, so if I do read it it's usually when I've read the book itself.

Margaret: I hope you like it as much as I did. It's a gentle, amusing read.