Wildwood: A Journey Through Trees

My 21st. book for the Mount TBR 2015 challenge is Wildwood: A Journey Through Trees by Roger Deakin. 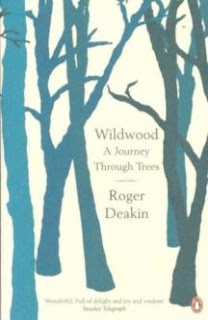 The trouble with taking months to read a book is that by the time you get to the end you've forgotten what you read at the beginning. (And it doesn't help that I haven't the first idea how to go about reviewing a book like this either.) I'm not at all sure when I actually started this non-fiction book, possibly as far back as May or June, I know I abandoned it for a couple of months as I felt I wasn't really connecting with it. Anyway, I decided to pick it up again a couple of weeks ago because having got over a third of the way through it seemed a shame to give up on it.

The book is basically a celebration of trees... woodlands, forests and single trees; the fruits of those forests, the people who use them, what they do with the wood or fruit, how they make a living and so on. The author spent a lot of time camping out in woodlands, or on his own land where he had an old caravan affair he would spend summer nights in. The writing is rather beautiful and it was interesting reading about his experiences living out in the natural world and the wildlife he encounters.

There are also several chapters on his childhood. He attended an independent school where an inspirational teacher took classes of boys camping in the New Forest to study everything about a small area of woodland. They kept valuable records of the flora and fauna and a generation of boys were inspired to take an interest in the natural sciences.

Deakin covers quite a few areas of the country for the book: The Forest of Dean, parts of Devon, Essex, Hampshire, Suffolk, where he lived. We learn about moths, rookeries, bluebell woods, collecing driftwood on the coast and much, much more.

I rather thought that this was a book entirely about the British countryside until I turned a page and suddenly the author was walking in the Pyrenees. Huh? All of a sudden it became an overseas travelogue. I was not expecting that. After the Pyrenees he moved on to The Carpathian mountains to walk through forests with a friend who was retracing her father's footsteps as he ran from the Nazis in WW2. Then Deakin is off to Kazakhstan to look for the origins of the apple amongst the wild apple woods of the Tien Shan Mountains. From there he travels to southern Kyrgyzstan to learn about the walnut forests from the people who spend months each year camping there, harvesting the nuts. He met and stayed with local families and learnt about a way of life very few people know about in the west. I certainly had no idea that a large proportion of the world's walnut crop is grown in Kyrgyzstan. I wasn't even quite sure where it was to be honest - it's in Central Asia and has borders with China, Kazakhstan, Uzbekistan and Tajikistan, capital city, Bishkek. I love having my knowledge of the world enhanced by reading books such as this.

Personally, although I quite enjoyed the the beginning sections of the book that dealt mainly with the British countryside, the book really took off when he went travelling overseas. That's just me though. I'm very much into mountainous locations and loved hearing more about places I'd read about in Clear Waters Rising by Nicholas Crane. But also the completely new regions - to me - of Kazakhstan and Kyrgyzstan and the mountains and forests that exist there.

The saddest thing was that I knew before I started that this was Roger Deakin's last book. Wildwood was published after his death from a brain tumour in 2006, aged 63. To lose a writer such as this is a real tragedy. Not enough people write about the beauty of nature and the diversity of the peoples of our world in such a meaningful and sympathetic way. I only gave it a three on Goodreads: if it were possible it would have been a three and a half. A lot of it worked for me but some of it didn't. Long sections on Australia just didn't connect with me and I found myself skim reading those. Others might enjoy those of course, just depends on your outlook. Anyway, I'd really like to read his book on wild swimming, Waterlog, at some stage and next year plan to use Bev's Mount TBR challenge to read a lot more non-fiction like this. (It's also made me want to read The Woodlanders by Thomas Hardy as Deakin mentions the book all the way through his own book.) I have already made a pile... Say no more. ;-)

I think the only reality book about trees I've read is Bill Bryson's A Walk in the Woods (loved it!)

Have you ever read The Forest by Rutherford? here's the link

It's fiction/ history and all taking place in The Forest in England.. check it out!

what a nice, sensitive, caring review. not a book i'll read, but i understand why you liked parts of it. btw, something completely different except for title - there is a book by the singer in the decemberists, illust. by his wife called wildwood. and two more follow. more here:
http://www.fantasticfiction.co.uk/m/colin-meloy/

I really enjoyed reading your post because I read Wildwood a couple of years ago and remembered it as a book I really liked in parts.I had to look at my blog post to see what I wrote about it at the time and yes I thought it was brilliant and fascinating in parts and in other parts my eyes glazed over as I got lost in all the facts and details that he recounts. Sometimes his writing is poetical, full of imagery, which I loved. I liked the southern English chapters best and my favourite chapters were the ones about David Nash, a sculptor in wood and about the paintings by Mary Newcomb. I also liked the chapter on walnuts. Overall, I thought it an interesting book, with some outstanding chapters. It’s not a book to read quickly and some parts are written much more fluently than others, but it’s full of fascinating information and meditations on the natural world.

Sometimes I think about not writing my blog, particularly at this time of the year, but when I look back, like this, I realise how much I quickly forget what I've read and am glad that I wrote down my thoughts. And so I carry on.

Pat: Me too with Bill Bryson's book... hope to see the movie at some stage.

No, I haven't read The Forest but have read ER's Salem, which I thought was good.

Thanks, Nan! I'll look into the book you've recced.

Margaret: I think it was your review which made me want to read Wildwood. Yes, it was a real mix of fascinating stuff and not so fascinating stuff. So sad about his premature death. I gather all his diaries and notebooks have gone to a local library or museum.

Yes, I must admit I too think about not blogging, so those are the times I ease off a bit and don't post so much. (That also happens when I'm busy.) All in all though, I feel as you do that I'm glad I wrote down my thoughts. Plus, it's a really good mental exercise to sit and compose your thoughts about a book into something coherent and get it down.

What a lovely thoughtful post, Cath. I've sort of dipped into this book but not attempted to read it cover to cover - though I might read the bits about Kazakhstan and Kyrgyzstan having seen your comments.

Interesting to see you and Margaret talking about not blogging just as I'm returning from my hiatus - I did find myself missing it badly at times, both for the sense of community and for the organisation of my thoughts. I'd like to settle into a couple of times a week routine but not feeling too pressured about it, but if I have to make a choice about reading or blogging, reading will always win.

Thanks, J. It is actually a really lovely book and, to be honest, eminently suitable for dipping in and out of.

It really is nice to see you back. I think one of the things I've learnt over the years is not to feel pressured into posting. I used to worry that folk would stop reading my blog and commenting if I wasn't posting 4 times a week or something. Now, if I finish a book and want to write about it (or it's for a challenge) I do. If I don't feel inclined then it just gets a mention or brief review in my end of month post. As you've discovered on returning after a big gap... people are always around and always pleased to see you when you return.