Two books to do brief reviews of today and the theme is very definitely mountainous. If you don't care for mountainous, chilly - even arctic - conditions then look away now. Nothing to see here... 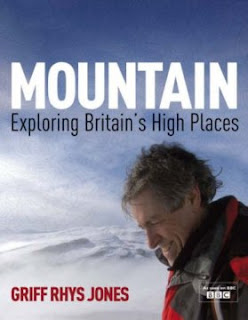 This is the book based on the author's BBC TV series of the same name which was aired in 2007. (Was is it really that long ago? Heavens...) I watched it at the time and then watched the repeats earlier this year which the Beeb put out in the afternoons. Very enjoyable and right up my street. Comedian, Griff Rhys Jones, is a very amiable, self-deprecating presenter of TV documentaries and, given the evidence of this book, not at all a bad writer. His mission was to climb some of the highest mountains in Britain and given he was not at all a climber this was quite a task. About a third of the book concentrates on areas in Scotland, naturally, because that's where most of our major mountains are. That suited me fine as it's a country I love... plus the photos of the scenery were utterly stunning. Possibly there were a few too many of the author himself but there you go... it's his book. I found it less interesting when he moved on to England and Wales although even then his commentary was never less than readable and often very funny. Anyone living overseas interested in the UK could do a lot worse than order the dvds - if they're available in other formats - of this series as it really is scenically stunning and very watchable.

Next, The Mountains of Majipoor by Robert Silverberg. (Never let it be said that I'm not an equal opportunities mountain reader as this is science fiction. Yes, I really am nerdy enough to search out mountains in my fictional reading as well as non-fiction...) 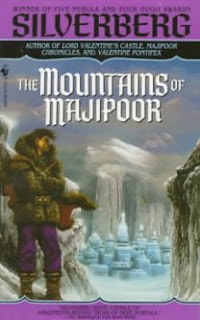 Having fallen out of favour for shooting a rare animal on land owned by an influential member of the ruling classes, Prince Harpirias, a minor noble, is banished to the city of Ni-Moya close to the frozen wastes in the north of the planet of Majipoor. He vegitates there until a message comes through that he's to lead an expedition north into the mountains to rescue a team of archaeologists who've been kidnapped for trespassing on land owned by an unknown tribe. This is the last thing Harpirias wants to do but he is eventually persuaded. He travels north with a motley band of soldiers and the guide, a shape-shifter, who is to be his interpreter. The kidnappers turn out to have a town nestled in a frozen valley, surrounded by massive mountains. They are also quite barbaric and Harpirias will have his work cut out to rescue the unfortunate prisoners.

I kind of wanted more from this book given it was written in 1995. To me that's late enough for a plot that's more complex than just 'explorer chappy goes north to meet with primitive culture, has sex with king's daughter and comes home'. Ok, the setting of the mountainous, frozen wasteland was nicely described which is why it got a three from me on Goodreads rather than a two. Plus, I realise this is book four in a loosely connected series ('Majipoor: Lord Valentine') and I've only read book one... which I actually thought was rather good. But still... I was disappointed and grieved a bit for what the book 'could' have been. The 'barbaric' villagers were terribly formulaic, Harpirias himself was really quite unpleasant, and the only female character was there for the sex... I mean 'really'? I must add that this is just my opinion, 'Your mileage may vary' as they say but I did an awful lot of eye-rolling as I read it. Possibly if it had been written in the 1950s or 60s I might have given it a 'lot' more leeway but I simply didn't think it was good enough for 1995.

omg lol as soon as I saw the title The Mountains of Majipoor I knew the name Majipoor but until you mentioned the series and "book 1" I couldn't remember! I too read book one EONS ago! lol but never went on with the series.. how strange that you come up with book 4 lol.

we both seem to be doing some reality reading.. I am a bit slow again reading more about Kennedy and his assassination ..this on begins before Kennedy and all the connections to the mafia even with Eisenhower and Nixon to get rid of Castro. But it is also showing how the assassination WAS a conspiracy and all involved.. it surely shows how corrupt the government is..!! good book though!

Pat: Lord Valentine's Castle was that first book and that was pretty good. I borrowed book 4 from my daughter as I liked the look of the cover. LOL

Yeah, I haven't read any reality books in months and now I'm back into them, which I like. Fascinated by all the Kennedy stuff you're reading, you must be learning so much from them. All the corruption you write about is pretty shocking but I'm guessing it was/is the same here... just a different kind of corruption. The rich get richer etc...

and one wonders why I don't vote anymore!

I watched Mountain - can't really believe it was 2007 - and bought the book then. I've dipped into it but not read it throughout. And did the same for his Rivers book. Why isn't there enough time to read?

We've been watching quite a lot about the Kennedys recently - fascinating family and shocking too what happened and is still happening.

I've been reading some non-fiction, but not as much as I'd like. It takes me longer to read than fiction - all those facts. My next one is Nagasaki, so I'm expecting that will be harrowing.

Margaret: Yes, it really was 2007. I watched his Rivers series too but have not seen the book in the library.

I seriously think the Kennedys must be the most well known and most dramatic family in the world. Such lives some members of the family led.

The Nagasaki book will be harrowing I'm sure, but also fascinating. Look forward to your thoughts.