I was given The Churchill Factor by Boris Johnson for Christmas last year and was absolutely determined to get to it this year, preferably around the time of Rememberance Sunday and Armistice Day, which was last Wednesday of course. For once I managed to do exactly what I planned! Miracles will never cease to be... 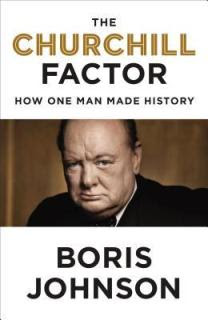 It's funny how some books often turn out to be not what you expect... very often they don't quite live up to your expectations, which is always a bit disappointing. The Churchill Factor was that rarity, a book that 'did exactly what it said on the tin' (British advert reference for those wondering). Boris Johnson is the current mayor of London (his two-stint term ends next year and someone else will be elected to the position). Like him or loathe him (and many do both) he has a certain eccentric charm about him that I hoped would transfer to his writing. It did. In spades. The book was everything I was hoping for, ie. a sort of conversational introduction to the life and times of Winston Churchill.

This is not at all a literary tome chronicling the life of Churchill from birth to death with everything in between. It starts in 1940 when Churchill and the country are in crisis. The war is going so badly Britain is on the point of being annilated by Nazi Germany. Quite a large percentage of the House of Commons and the British public are in favour of appeasing Hitler and making a deal: 'selling out' in other words. I honestly did not know we came that close or how many people were in favour of it. In the end Churchill managed to persuade the country and Parliament to fight on but things could easily have been very different. Johnson makes the case that no other man could've have done what he did, making us fight on and having the strength and charisma to get us through WW2. Looking at other contenders as he does, it's easy to see what he means.

Basically this is a book about Winston Churchill's character. What was he like? What made him tick? 'Warts and all' is an over-used term but it's almost true here. Johnson goes into all the man's character traits, his meglomania, his charm, his work-ethic, his honesty, his eccentricities (there were many), his capacity for drinking and so on. I say 'almost' because I did slightly feel that Johnson was almost too eager to explain away some of the more questionable decisions Churchill made. The bombing of the French fleet at Mers-El-Kébir for instance, the description of that shook me a bit. That said, it was war and someone had to take these horrendous decisions, rightly or wrongly. None of us can really put ourselves into the position of a man like Churchill... in charge of taking a country through a world war and 'winning' the thing.

Reading this book it's hard not to come to the conclusion that Churchill was a bit mad. He fought in several wars and constantly put his own life at risk in a very gung-ho manner. A real 'Boy's Own Hero'. Johnson suspects he did it partly to impress his father who basically ignored him, but also because he was a huge self-publicist and loved reading about himself doing brave things in the papers! Complex isn't in it. We're all a mix of good and bad, selfish and unselfish, but Churchill is about as complicated as anyone I've ever read about.

I have say, I think Boris Johnson handles writing about this complex man very skilfully indeed. There's a lovely, amusing turn of phrase all the way through:

'Sometimes he could be Gibbonian; sometimes he was more of a funky Gibbon;'

And referring to one, Henry Labouchere, an anti-semetic who wanted to criminalise homosexual activity and who made endless allegations about Churchill's leadership, as 'an ocean-going creep'.

I wish I'd noted more quotes but I got so wrapped up in reading the book I forgot to note pages.

Churchill likewise had a brilliant sense of humour but Johnson makes the point that many of the famous Churchillian quotes we all know are sadly not true, they were made by others etc. I did love Churchill's way of signing off his letters with KBO. It stands for Keep Buggering On... so typical of men of that generation. My mother used to say, 'Keep your pecker up'. I suspect there were any number of encouraging sayings that people used during the war that we might deem a bit odd nowadays...

I could go on and on and on about this book. For me to read a non-fiction book in four days there has to be something special about it and for me it has to be its conversational tone. Johnson meanders about all over the place timewise, one minute you're in Parliament at the start of WW2, the next you're on the battlefields of WW1 and then suddenly you're hearing about Jennie, Churchill's mother. It sounds chaotic and I suppose it is a bit, but it works. I would say that this is probably not a book for your Churchill expert. I don't imagine (though I might be wrong) that they would learn anything new. But for me, with just a little knowledge of the man, it was perfect. I loved it and it's even better than that because I so wanted to like it.. and actually did. It lived up to my expectations and actually... that's a bit rare.

The Churchill Factor is my book 22 for Bev's Mount TBR 2015 challenge.

I have always been fascinated by Winston Churchill, Cath. This sounds fascinating.

I've nearly bought this book a few times - it looks like I should!

wow 4 days!!! when I get political books I immediately slow down in my reading because I don't want to get confused (and I get confused very easily LOL). Anyway I was hoping it would be the Churchill book I have called: Churchill Defiant Fighting on 1945-1955 by Barbara Leaming. Ah well, Guess I don't get a review first lol.. Glad you enjoyed this one.. I may read politics slow but if I'm not enjoying it , it gets put down! :) Onward to the next book Sis!

How we could use him now!

Lovely review of a book that is new to me.
I grew up in a home where a picture of Churchill was displayed inside the glass bookcase door in the Kitchen and a set of his History of WW2 sat on my dad's chest of drawers...so it's no surprise that I grew up a fan.
My favourite read by Churchill is a very small book "Painting as a Pastime" that you can download as a PDF HERE
https://www.churchillbooks.com/GuidePDFs/g147.pdf

While looking for a link about the book I came across this article http://www.theguardian.com/books/2003/aug/30/highereducation.news which I found interesting not least because for me "Painting as a Pastime" stays in my mind as a valuable book about life and not really about Art at all ...I'll have to go read it again to see if I'm going bonkers!

Penny: I must admit I've not been all that interested in him before so am not sure where this sudden interest has come from. I shall definitely be reading more though.

Margaret: Or possibly grab it from the library!

Pat: This was a very easy reading political book. I usually take a while to read that kind of book too. Nope, not the same book at all, sorry. LOL!

Nan: I was thinking the same thing as I was reading. And also wondering whether we have such a leader around now if it becomes apparent that we need someone.

Val: I saw that book on the list when searched out a list of what he's written. It was also mentioned in The Churchill Factor I think. Thanks for the link to that. And thanks for the other link which I'll investigate later. My next plan is get a book called A Daughter's Tale by Mary Soames, one of Churchill's daughters of course. My library has it and it looks interesting.

Oh I hadn't heard of that one ..Thanks Cath (I'll see if our library has it )

Isn't it a wonderful feeling when a book lives up to its billing? I'm so glad to hear that you enjoyed this one, and it's one that has me perking up my ears. Churchill's character was unique, and a writer who could do "it" justice with lots of stories and history would be just the ticket.
Thanks for sharing!
Judith (Reader in the Wilderness)

Our library service has two copies - not in the branch I use, so I've reserved it. How will I ever get round to reading my own books when I keep borrowing books from the library? :)

Val: I grabbed a copy from my library in the week. In fact they had two!

Judith: It really is nice when a book lives up to its billing. And rare. He was unique and I like the fact that Boris Johnson makes a very good case for that and that no one else could have done what he did.