Life is a little chaotic at the moment and thus I am reading but at a slower pace. This time last month for instance I'd read eight books... this month... three... although two of those 'were' quite long books. No matter, it's not a race, but I do need to catch up on a couple of reviews, so here goes.

First up, Hyperion by Dan Simmons. This is my 12th. book for Bev's Mount TBR 2016 reading challenge. 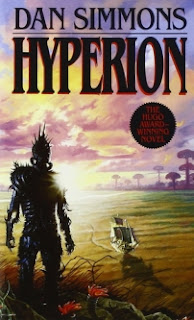 It's the 29th. century and humans are out in the galaxy, living on new planets, having destroyed Earth. There's a sort of federation of planets known as the Hegemony, led by us. There's a form of interpanetary travel known as farcasting, with portals where you step through onto another planet, but it doesn't cover everywhere so sometimes people go by ship and that thing occurs where your trip might take a few months but back home everyone you know is twenty years older... or dead. There's also something called the Technocore which is run by all the AIs and is very secretive and scheming, they have a lot of power as they control all the computers and so forth. The Hegemony is being attacked by interplanetary barbarians known as the Ousters. Their current target is Hyperion an isolated planet which has been colonised by humans but not terribly successfully. There is something odd about the planet and it involves its religion which is based upon the worship of something called The Shrike. Seven pilgrims are 'invited' (not given much choice in the matter) to travel to The Time Tombs where The Shrike is purported to live... their travels being made much harder by the start of the Ouster war. Each wants something from this being but what? And why have they each been 'invited'? Why them specifically? It's decided that as they travel each will tell their story and try to discover how their various histories may be connected, so that when they get to the tombs they'll be armed with as much information as they can muster.

If that sounds like a complicated description then that's because this is quite a complicated book. To be honest, I'm not really sure I understood all of the technical explanations. I even had to go and check some of it with Wiki to make sure I'd got it right. (Don't count on it...) That said, I really did enjoy the book. Basically it's a science fiction version of The Canterbury Tales. There's a Priest's Tale, a Soldier's Tale, a Poet's Tale and so on and so forth. A bit like a series of short stories but with plenty of story inbetween to bind each tale together. I found most of the stories really quite compelling, my favourite being The Priest's Tale which read a bit like a Victorian or Edwardian 'weird tale'. The Scholar's Tale was heartbreaking, it involves his daughter who has had an accident in the Time Tombs and starts to grow younger rather than older. The Soldier's Tale was a trifle too bloodthirsty for my taste but you can't win them all. I found each story interesting and very readable, as is the whole book. It had one drawback for me and I didn't discover it until the end. I thought there would be a proper conclusion to the story and there isn't. It ends as the pilgrims reach the valley where The Time Tombs are and if you want to find out what happens to them you have to buy or borrow the next book. This is probably a spoiler but I think it's only fair to tell anyone wanting to read the book that this is the case... in fact there are, altogether, four books in the series but this first book does not stand alone. Despite that, I found Hyperion to be an excellent read and have reserved the second book, The Fall of Hyperion, from the library.

Lastly, a complete change from the above, To Love and Be Wise by Josephine Tey. This is my book 13 for Bev's Mount TBR 2016 reading challenge and my book 6 for her Vintage Mystery Cover Scavenger Hunt challenge, covering the category 'A Building Other Than a House'... in this case a church. 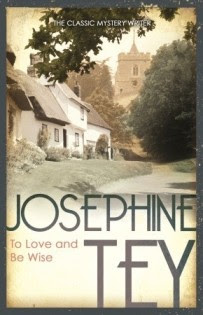 The village of Salcott St. Mary is a typical sleepy village in a sleepy part of England. Except that it's not that typical any more as it's been taken over by celebrities who followed an actress friend of Inspector Alan Grant, Marta Hallard, when she moved there. So now the village is full of famous writers, actors and dancers. The tale begins when Alan Grant comes across Leslie Searle at a celebrity party. Searle is a good looking American and an instant hit. He gets himself invited to stay at Lavinia Fitch's large rambling pile, 'Trimmings', in Salcott St. Mary. Lavinia writes hugely popular potboilers. Leslie is driven to Trimmings by Lavinia's niece, Liz. Liz is engaged to Walter, a radio broadcaster, and Lavinia's heir. They all live in the large house along with Liz's mother, Emma, who is Lavinia's sister. Emma dislikes Leslie on sight. He's very handsome and personable, and Emma senses an attraction between Liz and Leslie, which would ruin her engagement to the plodding Walter. Walter and Leslie, who is a famous photographer, decide to do a book together. The book is all about the local river so they decide to travel the length of it in a canoe. But one night after, a public disagreement in a pub, Leslie disappears. It's generally thought that he must've fallen into the river and drowned. But did he fall? Or was he pushed? It's Alan Grant's job to discover the truth.

I must admit that I wasn't mad about the first two books in the Alan Grant series. They were fine, but for me, not wonderful. And then I read The Franchise Affair and that book turned me into a real Josephine Tey fan. Miss Pym Disposes reinforced that status (not an Alan Grant book) and To Love and Be Wise put her firmly among my favourite authors. I adored this book. Of course I could have been ready for something like this after two quite long, rambling, involved books... perhaps Josephine Tey's lightness of touch and wonderful way with describing the foibles and eccentricities of her characters was just what I needed. Whatever, I devoured it in two days and loved it to bits. It's quite a complicated list of characters and I did struggle a bit to remember who was related to who and how. But that was made up for the sense of place, a cast of eccentric nutters, and a mystery that kept me guessing to the end. I was genuinely surprised by the outcome... a real 'Oh!' moment. Very clever. My next Josephine Tey will be The Daughter of Time and I can't wait to read it. Except that there are not many left after that and I don't want to be in a position where I have none of her books left to read. I'm the same with Dorothy L. Sayers. Some of the best authors were not very prolific it seems.

It's hard to believe that May is nearly here. It will be another chaotic month for me. We're having the roof replaced at the moment and then my husband goes into hospital for a knee replacement operation. I don't think I'll be blogging very much but should be around occasionally.

Hey Sis! That Dan Simmons doesn't look to my liking (finally a book not going on the wish list!) but I do like Simmons writing. I seem to choose the topic with him and then always love what he writes.

I haven't read any of the books by Tey.. so can't comment really. Very glad you enjoyed that one though. I do like books that make us feel good and especially ones that we don't want to put down!!

Glad that you liked the last few Josephine Tey books that you read. The Franchise Affair is my favorite, I think. I don't remember To Love and Be Wise as well, but I liked all of her books.

Pat: No, the Dan Simmons is probably not for you given you're not really into reading science fiction. He's a good writer though and I definitely want to read more of his books.

Keep an eye out for Tey books at your thrift shops as I think you would like them.

Tracy: I like The Franchise Affair *so* much... and this one is almost as good I think. She really got into her stride with books 3 and 4.

Both Tom and I have bad knees but we are living with them in our own ways. I seem to be reading only at bedtime these days, which means kindle books. I've read only nineteen this year. Just busy, busy with those little ones in my life.

Nan: Yes, me too as regards my knees, they're liveable with at the moment. Peter's aren't though, he's been in a lot of pain with them for several years so it's time something was done. Hopefully he'll have a better quality of life after.

I'm reading a lot less this year too, busy with family and other things like you. I'm just a few books ahead of you but still as similar to you as usual. LOL!

Isn't that just amazing. Have you heard of the American mystery writer Jane Langton? I've been reading a lot of her books. They are all set in Massachusetts and have the most wonderful sense of place. Very intelligent stories.

Nan: No, I haven't heard of Jane Langton but I will investigate.