The Kingdom Beyond the Waves

My first book for Carl's Once Upon a Time X challenge is The Kingdom Beyond the Waves by Stephen Hunt. As I've had it on my Kindle for several years, it also qualifies as my book eleven for Bev's Mount TBR 2016. 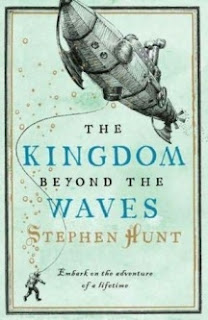 In this steam-punk fantasy yarn the lost city of Camlantis is the obsession of archaeologist, Professor Amelia Harsh. The legend is that it had a Utopian society and she wants to learn its secrets to make present day society a better place. It's rumoured that the city - if it existed - is floating around in the sky, too high to be accessible, but that some of it is buried in a lake. Unfortunately this lake is in a wild and inhospitable 'jungle' area of the planet (think 'The Amazon'), called Liongeli, and inhabited by various unfriendly races who do not like strangers traversing their land.

Amelia can't get official funding to mount an expedition, so when wealthy industrialist and politician, Abraham Quest, offers to fund one, she jumps at the chance even though she hates the man and suspects his motives. Going with Amelia is Jared Black, an elderly adventurer, who doesn't want to go but is cajoled into it when Quest produces Jared's beloved once wrecked U-boat from the depths of the ocean, newly refurbished. Also accompanying them is a motley band of individuals from different races, with various skills. Quest has also supplied protection in the form of a small regiment of Amazonian type female warriors. Amelia is now wondering what on earth she's got herself into. But never mind, she's going to find Camlantis... that will make it all worth it. Won't it?

This is book two of Stephen Hunt's 'Jackelian' series, I read book one, The Court of the Air in 2011... my review of that book is here. Rereading it I can see that I more or less felt exactly the same about that book as I feel about The Kingdon Beyond the Waves. I think the term 'Never use one word when fifteen will do' applies to the writing in these books. Reading them can be a confusing experience and I'm not at all sure whether it's me or not. The books are chock full of ideas, some of them just mentioned in passing, often for no reason and it's like a kind of over-load of information really. And I lost count of the times when I would read a passage, do a mental 'Eh?', and have to reread it to get the gist. It's quite possible I'm not mentally agile enough for this series, let's face it they're probably not aimed at 62 year old grandmothers with strange tastes in books, but I can't help but feel it is a bit of drawback to write like that.

And yet... I kept reading. Because, as with that first book, the world building is amazing. I think, but am not sure, that it's a dystopian series set thousands of years in our future. There are hints. And the world the author has created is a fascinating one inhabited by many races including sentient machines called 'steammen', shape shifters, Amazonian warriors, mysterious spies from The Court of the Air and so on and so on... really it is quite amazing. And the story itself is a cracking adventure yarn... there's no lack of action as the motley band make their way through the jungle, not only fighting some very strange beings but a saboteur among their own ranks. I liked too the fact that the author has made this a story where both male and female characters take equal part in the action, he's to be applauded for that in my opinion. Even though those women for some reason all had to be muscle-bound fighters (even Amelia) he 'tried' and I appreciate that.

I think I can say that I enjoyed the book but it was hard going. I don't honestly know whether I'll read any more in the series, maybe, maybe not. We'll see.

I loved the first one then found they got increasingly harder work. I absolutely agree the world-building is amazing, and I love some of the ideas - especially the steammen and the loas - and I don't mind the lush verbiage, but it could have done with a good edit, I guess... I got hopelessly stuck on the 4th one and didn't finish it, but I may go back to it sometime. Enjoyed the third, though I may have skipped the odd descriptive passage!

try try again lol.. I tried reading book one of this series a long time ago but for reasons I can't remember now it just didn't catch on for me.. you have always enjoyed more types of books then do! glad for you.. makes your tbr just that much larger LOL

I've never read any steam-punk, but if this book is hard going maybe it's not the best book for me to read first? I have a friend who recommended The Watchmaker of Filigree Street by Natasha Pulley - have you read that? She said it's really good. Any other steam-punk you can recommend?

I've just discovered your blog through Books Please and would love to subscribe by email. Is this possible?

Geranium Cat: The world building is what kept me reading. Some amazing ideas in the series. As you enjoyed the third book I'll definitely read that.

Pat: I completely understand why the first book didn't catch your interest... it's a very odd situation... books with good ideas but writing that's hard to get on with.

LOL... yep... you've hit on the exact reason why my TBR pile never gets much smaller. Mind you... you read a good mix of books too.

Margaret: Good steam-punk is very hard to find. So hard that I can't really recommend anything as I haven't found any that is 'really' good. I'll look into the book you mention, thanks for the rec.

Debbie: Hello, nice to meet you. I'm really sorry but as far as I know it's not possible to subscribe to my blog by email. I think most people just do the 'follow' thing. I am on Facebook and I always post there if I've written a new book post. My FB page is here: https://www.facebook.com/PzCath

There's a chance you are qualified to get a free $1,000 Amazon Gift Card.