I'm waaaaay behind with book reviews so it's time to catch up with some brief reviews.

First up, The Watchmaker of Filigree Street by Natasha Pulley, this is my third book for Carl's Once Upon a Time challenge. 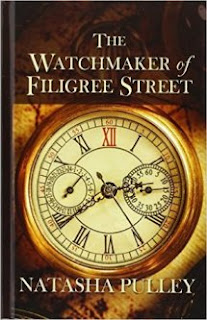 Nathaniel Steepleton, known as Thaniel, is a telegrapher working for The Home Office in Victorian London. A one time pianist, he had to give up a promising career when his sister's husband died and it fell to Thaniel to earn enough to send her money for herself and her children.

Arriving home one evening Thaniel finds a gold pocket watch on his pillow. He has no idea where it came from or who put it there, but it's a very fine thing indeed. Nothing happens for a while apart from a threat by Irish Nationalists to plant a bomb in the vicinity of The Home Office. Everyone is naturally on edge. The watch saves his life when the bomb goes off so Thaniel goes in search of its maker. Keita Mori is a watchmaker and Japanese immigrant whom Thaniel takes to immediately but is he keeping a secret? Does he know something about the Irish bombs?

Meanwhile in Oxford Grace Carrow is a young woman studying physics at university, one of the first women allowed to do such a thing. A talented student, she's studying the luminiferous ether and wants to prove its existence with her experiments. A chance meeting at a ball brings her and Thaniel Steepleton together. Thaniel likes this studious, unfeminine young woman immediately but Keita does not. Thus Thaniel finds himself torn and having to make choices he'd really rather not but, like it or not, the lives of these three people are now inextricably entwined.

It's now a couple of weeks since I finished this and here's proof that you should write about books fairly quickly because I'm now struggling to remember it. Mainly I enjoyed it... its concentration on intricate clockwork was fascinating and something I've not come across before... it's a wee bit steampunkish and I like that. I don't think I understood all of the scientific explanations, especially Keita Mori's strange existance. But again... that was rather unique. I found characterisation slightly weak... I didn't feel strongly about any of the people in the book. I did like the flashback sections where we heard about Mori's past life in Japan. All in all not bad at all for a debut novel and I look forward to more by the author in the future.

Next, a non-fiction book, The Olive Route by Carol Drinkwater. This is my book 15 for Bev's Mount TBR 2016 challenge. 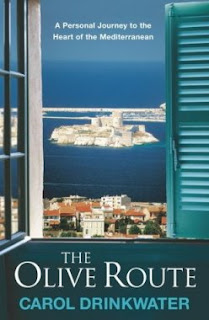 Carol Drinkwater is an actress, probably best known in the UK for playing Helen, the wife of James Herriot in the BBC series, All Creatures Great and Small. After moving to France to live on an olive farm, she wrote about her experiences in a trilogy of books that have become hugely popular. After writing those she decided to investigate the origins of her beloved olive tree, hoping to discover who turned the olive into the domesticated tree that we know today. How many thousands of years ago was this done? She starts her investigations in The Lebanon where she's shown an olive grove purported to be 6,000 years old. From there Carol's travels take her all over the Meditteranean, visiting countries such as Greece, Syria, Libya, Israel, Malta, meeting people, hearing their stories and discovering the history of the olive.

To be honest, I found this book to be more of a travelogue than a history book. And for me, that's fine. I notice some on Goodreads were disappointed: personally I wasn't. I found it to be the perfect mix of the author's recounting of her experiences around The Med along with bits of history of each country. My favourite place was Malta where she met a man trying to reintroduce the olive to the island after hundreds of olive groves were destroyed centuries ago. I thought that was joyous and so did she I think. More disturbing for me was her experience in Libya. This was just before the Arab Spring and Gadaffi was still in power and lone white women were not really that safe travelling alone. Now of course they're definitely not safe... but then no one is! She also found Israel unsettling, understandably so with what's going on there. It's a complicated situation but I felt she wrote very well about her time there. In fact the writing is top notch... descriptive, atmospheric, very personal. I really did love this book to pieces and was sorry to finish it. I've had it on my Kindle for several years but feel I would like paper copy so will probably get it along with its sequel, The Olive Tree. I also plan to read her olive farm trilogy at some stage. 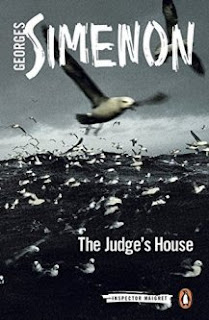 For some reason (we never find out why) Inspector Maigret has been exiled from the police in Paris. He's been sent to a quiet coastal backwater area of the the Vendée (just south of Brittany) where he's basically bored to tears. Then Didine Hulot, an elderly woman, comes to report that her husband has seen a body on the floor of a local house. Said house is owned by a retired judge who has moved to the area from Versailles, with his son and daughter. Maigret catches the judge trying to dispose of the body and arrests him. But it's really not clear who exactly killed the dead man or even who he is. There's a complicated story of a family beset by mental problems and a local fisherman who wants to marry the judge's daughter. It takes all of Maigret's ingenuity to unravel the tangled mess and get to the bottom of it all.

It helped with this one that I'd been to the Vendée where it's set and could appreciate the atmosphere and descriptions. It really was very much of its place and time, Georgs Simenon was an expert at such things and several of his books now have really sent me to the place where they're set. Plotwise I found it slightly predictable, but it was fun seeing Maigret going about solving the murder... never letting a single person know what was going on in his head. I also liked the Miss Marple type character of Didine Hulot who knew everything that was going on in the village and was always one step ahead of Maigret. Infuriating him of course. A nice comfy read for me which is what I need at the moment.

The Judge's House qualifies for Bev's Vintage Mystery Cover Scavenger Hunt Challenge under the category 'Bird'... because there are rather a lot of seagulls on the cover!

by leaps and bounds she is on a fast roll or reading! lol love the cover of the Watchmaker..that made me read the review with interest lol.. but nah..thankfully these won't get added to my wish list! Sure don't need more !! I'm not happy that I don't seem to have any Victorian mysteries at the moment. I might have to resort to Dickens *snort*. You sure are reading a good number of books this year! Glad they seem to all be good or at least satisfactory!!

"The Watchmaker . . . " sound fascinating, Cath. Perhaps I will get to it sometime. My bookish activities have been wanting lately - not for having no books, but, for not making the time. I'm wondering i"The Olive Route" might be a good audio. I'm rambling. Thanks for posting these and I hope your summer is going well.

I keep swaying backwards and forwards on The Watchmaker of Filigree Street - I think the title attracts me more than the blurb! Interesting that it hasn't really stuck in your mind. I often think I should leave three weeks before writing reviews to see if books have staying power...

I'm the same - if I don't write about a book soon after I've finished it I struggle to remember detail, my head full of other things and what I'm currently reading. You did a much better job than me in summarising the plot - I gave up and copied the synopsis from the inside cover! I know what you mean about the characters, although I did like Grace, up to the point where she had Thaniel's trees chopped down that is.

I was wondering why Carole Drinkwater's name rang a bell! I'd probably like this book too - love olives. I'm glad I went to Israel over 20 years or so ago and saw the ancient olive trees there (and other things too, of course).

I like the Maigret books, but not read that one - and I've been to the Vendée, many years ago, my main memories being of the heat and insects! I think the settings of books help enormously with the atmosphere. I like it if I have been there as I can visualise it more easily and I like it if I haven't because it can make me want to go there (or not) - win/win.

I have not been keeping track of my Once Upon a Time challenge reading at all. I must get on that!

I quit The Watchmaker after twenty or thirty pages. I was just finding too many things that seemed out of place for the time period, starting with the nickname Thaniel. It was just so goth and so not Victorian. I really wanted to like that book too! Oh well.

Pat: Yeah, read quite a bit this year but slowing at the moment for obvious reasons. Thought I would read a lot while Peter was convalescing but, partly, I don't have time and also I can't concentrate very well.

Penny: I would think The Olive Route would be an excellent audio. I suspect the author may have done the audio herself, her being an actress.

Yvonne: I agree, it's very interesting that The Watchmaker has not really stuck in my mind. I fancy I didn't love it as much as I wanted to or as much as others. As I'm sure you know, that can happen.

Margaret: I honestly don't blame you for copying the synopsis... it nearly did my brain in trying to think of everything I ought to include.

I don't like olives at all but I loved The Olive Route and I have a suspicion you would too... it was fascinating.

My late sister-in-law lived in the Vendée for a couple of years before she passed away. The heat was almost unbearable but I liked the area very much.

Kelly: I'm not on track with Once Upon a Time either, I've only read 3 books so no way will I complete the 5 books I signed up for. That's the first time in years.

Kristen: I do understand why you stopped reading after 20 or 30 pages. I quite liked the book but I really didn't love it as much as I expected.