Catching up with several crime titles

I haven't had a lot of reading time recently and am behind on reviews of the books I have read. So this is very much a catch-up post... a few brief reviews of several crime novels.

First up, The Daughter of Time by Josephine Tey. This is my book 17 for Bev's Mount TBR 2016 challenge and also qualifies for Bev's Vintage Mystery Cover Scavenger Hunt under the category, 'Jewellry of any sort'. 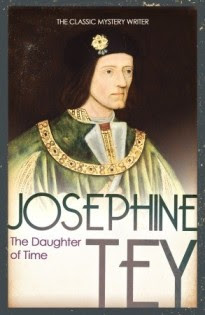 Inspector Alan Grant is in hospital after some kind of accident. He's flat on his back and likely to be for weeks. And he's bored. Various people bring him books, none of which are to his liking. His actress friend, Marta, brings him some pictures of various people from history with interesting faces, so he can decide whether or not they were criminally minded. From them Grant eventually chooses Richard III and embarks on a reading investigation, from his sickbed, the aim of which is to discover whether or not he really did kill the princes in the tower.

No real need to say any more about the plot of this book because that's it really. The story is much more of a history lesson than it is a traditional whodunnit crime yarn. I thought it was all fascinating to be honest. I knew there had been a lot of doubt about whether or not Richard III was guilty of the double murder but in this book Josephine Tey sets out the evidence for and against by having Alan Grant read up about it and also giving him an assistant researcher. I learnt much that I didn't know about that time period but there is also the usual wry humour running through the book. I loved Grant's housekeeper, Mrs. Tinker, and her outfit that she refers to as 'me blue' by which she gauges the importance of any event she has to go to... ie. 'It wasn't good enough for 'me blue''. Hilarious. And there is much more gentle humour in this vein. Sadly, I think I now only have two more Josephine Tey books left to read. What a shame.

Next, The Ghost Fields by Elly Griffiths. 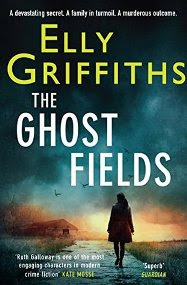 A World War Two plane is unearthed by a digger in a field in Norfolk, the body of the airman is still inside. Forensic archaeologist, Ruth Galloway, is called in and she discovers immediately that there's a bullethole through the pilot's skull. The body is identified as Fred Blackstock, whose family own a large house on the marshes. The problem is, the body doesn't belong to the plane. Someone has dug the body up from elsewhere and planted it in the WW2 bomber. DCI Nelson sets about solving this mystery with Ruth's help. Ruth is glad to be working with Nelson again but wishes her life was just a bit less complicated emotionally.

Loved it. But then I always love Elly Griffiths's Ruth Galloway books. They're not for everyone I know that, but I love how Griffiths manages to get inside the head of all her regular characters amd make it all so real and amusing. Ruth with her lack of tolerance for attention seeking colleagues or impatience with stupidity or prats, is at times hilarious. I also the love the back story of Ruth and Harry Nelson and their daughter... though this instalment was a bit of a tease in that department I thought, but still very good. The mystery element was also excellent, involving as it did the WW2 airfields of Norfolk. Interesting stuff. And of course always, always a terrific sense of place. Definitely one of my favourite series at the moment.

Lastly, Heirs of the Body by Carola Dunn. This is my book 18 for Bev's Mount TBR 2016 challenge. 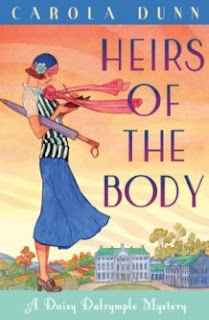 Daisy Dalrymple is asked by her cousin Edgar, the present Lord Dalrymple, to help find an heir to the title and estate... he and his wife being childless. Various contenders are found, a diamond magnate from South Africa, a sailor from Jamaica, a young boy from Trinidad and a hotelier from Scarborough. A mixed bunch, no question. And are they all who they say they are? A lawyer friend has the task of finding out and meanwhile they are all invited the family estate, Fairacres, for Edgar's birthday celebrations and to get to know them all. Daisy and Alec also attend. And then the accidents begin. First minor things to the children, but then one of the claimants narrowly misses being killed by a tram and Daisy and Alec realise that things are more serious than they thought. Alec is instructed to investigate... with Daisy's 'help', naturally.

This is a huge series now... Heirs of the Body is book 21 I think. It must be very hard with a series of this length to keep up the quality and all power to the author's elbow for managing it. This isn't my favourite, I will admit, but Daisy Dalrymple books are never anything less than readable and I enjoyed this very family orientated instalment as Daisy's relations take centre stage. It sort of reminded me of Angela Thirkell's Barsetshire books to be honest, which is never a bad thing, and Enid Blyton! After the interesting ending I look forward to seeing what happens to these new members of Daisy's family, so I hope Carola Dunn tells us. I'm sure she will.

my reading is nearly non existent . Between the kitten, doctor appointments and in general feeling not very good ..I read 4 pages and feel like I am falling asleep, and it's not the book! Hopefully things will get better. Speaking of getting better.. how's Peter doing?

Lovely to see you back here, Cath! The Daughter of Time is one of my favourite books and I've been wanting to re-read it for ages, just never seem to get round to it - you've spurred me on to take it off the shelf. I'm currently reading The Sunne in Splendour, also about Richard III, so will be interested to see how the two books compare.

I'm way behind with reading by the Ruth Galloway books and Daisy Dalrymple, so difficult to keep up with everything - well impossible actually.

And so far this month I've managed to read just one from my TBRs - library books and new-to-me books are taking over! And I haven't really felt like writing much, the heat here the last few days is too much for me.

I have a lot of catching up to do with Daisy! I like the plot of this one. Am assuming that none of the children are hurt. (such a softie I am)

This is funny, and sad for me- because I just tried reading Daughter of Time a few weeks ago, and found out it was really not my thing. Which disappointed me because I'd heard how awesome Josephine Tey is. I just couldn't get thru it though.

Pat: Ghost Fields *was* good... great series as a whole.

Margaret: I found The Daughter of Time really fascinating and would like to read some more about Richard III but not sure where to start. Will be interested in what you think of the book you're reading.

It is hard to keep up with all the series... I've got several favourites that I've slipped behind with by several books.

I know what you mean about the new to me books. LOL The heat last week was too much for me too, glad it's gone.

Nan: Very easy to fall behind with these series. Especially Daisy as the books come out quite frequently. No, none of the children are seriously hurt, minor bumps. I can't read books where horrible things happen to children. It's why I haven't got past book 1 of the Simon Serrailler books by Susan Hill as it involves the kidnapping of a young boy. I started to read it and it was the child speaking, trapped somewhere, and I had to stop as it upset me. I'm a wimp too!

Jeane: The Daughter of Time is not typical of Josephine Tey's books. You might want to try something else... Miss Pym Disposes is excellent or The Franchise Affair.