Time to catch up with several book reviews. Busy with the grandchildren over half-term and then a nasty cold most of this past week meant I was not really up to posting... or doing much at all to be honest. Apart from reading... 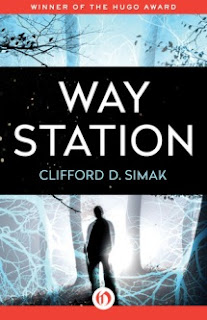 Enoch Wallace lives in Wisconsin on his remote family farm. He's 120 years old, fought in the American civil war in fact, but looks like a 30 year old. How can this be? Government agents would love to know so they are watching him. Enoch knows he's being watched but also knows they can do nothing to harm him. He's protected by a Galactic Federation - because Enoch is the only keeper of a way station on planet Earth. Countless aliens pass through his home on the way to other planets in our spiral of the galaxy and he has made friends with many of them. His home is impregnable, protected by a sort of cloak and within it Enoch never ages. But what of these government agents? And what of his nearest neighbours, a vicious family, apart from the daughter, Lucy, who is both deaf and dumb and seems to have an affinity with nature. Can they, between them, bring Enoch's carefully built existence crashing down around his ears?

This excellent vintage sci-fi story - it was written in 1963 - is very much of its time period. World peace was very much on people's minds after two world wars and the cold war just beginning. The main character, Enoch, is very despondent about the state of the world and expecting another terrible war to happen sooner rather than later. He's even created a sort of chart to note down events and has deduced from it that war is inevitable. From our vantage point in 2017 we know that it didn't happen but I have to say I sympathised with his despondency very strongly. We all know what it feels like to have these thoughts. But this is not a depressing tale. It's a celebration of nature, of our differences, of the fact that despite all there are plenty of people working to stop war happening. The place where this story was set, by the Mississippi in Wisconsin, was familiar to me as I'd just seen it in one of Michael Portillo's railway documentaries. So I could picture it perfectly and knew how beautiful it was there. I do love these vintage sci-fi stories, I read a lot of them back in the 60s but access to them, apart from the library and one bookshop in Penzance, was difficult. No ordering from other libraries in the county in those days and I couldn't really afford to buy books. It's fun to catch up on some of the ones I didn't know about now that access is so much easier. I have to say, I really enjoyed this one... my book five for Bev's Mount TBR 2017 reading challenge.


Next, The Lost Girls by Heather Young. 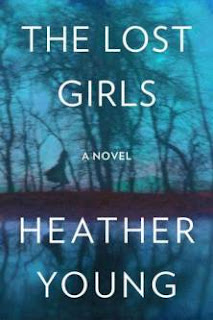 It's the summer of 1935 and the Evans family are at their summer home by a lake in Minnesota. The family are the mother and father and three daughters, Lilith 13, Lucy 11 and Emily aged 6. The happenings of that summer are recorded by Lucy, now very elderly and with not long to live. It was the summer that Lilith grew away from her and joined the other teens in the area, leaving Lucy at a loose end. And it was the summer that Lucy's six year old sister, Emily, disappeared and was never found.

Justine lives in modern day California with her two daughters and her new partner, Patrick. Patrick is seemingly the perfect man but something about his clinginess worries Justine. When she learns that her Great Aunt Lucy (Justine's grandmother was Lucy's sister, Lilith) has left her the house by the lake she decides to uproot herself and the girls and go there to live, without telling Patrick where she's gone. The change from sunny California to freezing Minnesota is dramatic and no one is very happy. There are still people at the lake who remember the tragic events of the summer of 1935. The house is so full of memories it feels haunted somehow and Justine finds she can't stay there during the day. And she can't help but wonder... what did happen to the missing sister, Emily?

Fabulous, just fabulous. This is a debut novel I gather... you'd never know it. It's so beautifully written with a really intense sense of time and place and a very lovely lyrical feel to the writing. The story is written with one chapter for Lucy, one for Justine and then Lucy again and so on. Lucy's chapters are written in the first person because she's writing the journal, Justine's in the third. It works so well and sucks you in immediately. I won't say this is a happy tale because it's not. There's lot of sadness and difficulty for the characters and towards the end some of it is quite hard to read. There's also a bit of frustration... one character got away lightly in my opinion. But that's life, there are no simple answers. This is very much a 'family secrets' sort of book and I know a lot of people enjoy that sort of thing... if you do then I can thoroughly recommend this one.


Lastly, Jacquot and the Fifteen by Martin O'Brien. 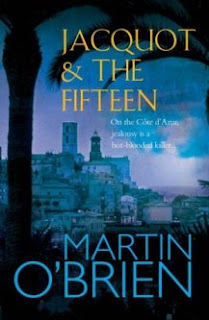 Chief Inspector Daniel Jacquot of the French police once played rugby for France. For ten minutes at the end of a game he was brought on as the reserve and scored the try that won France the match against England. He doesn't really think that merits him an invitation to the reunion party for that particular team but he gets one regardless and decides to go to the weekend do with his new girlfriend, Claudine. It's being held on the Cote D'azur at the luxury home of the team's then skipper, now a billionaire businessman. Unfortunately, three members of the team have recently died so of course are not there. When another member of the team supposedly commits suicide the morning after the party, Daniel's suspicions are aroused. It doesn't look like suicide to him but no one seems interested and he finds he's on his own in his quest to find a murderer who may be killing off members of the one time French rugby team. But why? What on Earth would anyone have to gain by this?

This is the third Jacquot book I've read and am happy to report that this was equally as good as the first two... possibly even the best of the three. Which is quite surprising really as there's a bit of a rugby thing going on in it, something which I know very little about. It didn't matter in the slightest as the main focus is on who's killing various members of Jacquot's team. I gobbled the book up in about a day, which is quick for me, but it was quite hard to put down. This is partly because the plot was so fast paced but also Martin O'Brien writes really well. (He's one of a small band of British male crime writers that I've recently come to admire including Peter May, Martin Edwards and Mark Douglas-Home.) I must also add that he makes the Cote D'azur sound utterly gorgeous... all that fabulous coastal scenery and inland with the hills and wonderful houses, gorgeous views. This book really took my mind off my rotten cold and I'm so grateful for that and also very glad that I still have six Jacquot books left to read.

wow.. you are just a reading fool lately! lol I have to check , I either read Lost Girls or it's on my wish list lol...glad you loved that one so much! I seem to love the family secrets books too!

Glad you enjoyed time with your grandkids. Sorry about the cold. Tiresome things. LOL

I read THE LOST GIRLS a while back and really enjoyed it too. Spooky, family secrets, and the setting was very vivid. And cold. I'll be watching for what this author comes up with next.

I haven't read any of these. The Lost Girls sounds just the sort of book I'd like too.

Sorry about your cold and hope you're feeling better now. I've been feeling under the weather since Christmas, nothing specific, but i think I'm allergic to something, keep sneezing and eyes sore and running. I hope it's not our cat!

Oh, these all sound good, especially The Lost Girls. I will keep them all in mind, Cath, as I look to new reads.

I hope you are feeling better soon. We both had a nasty bug after Christmas that seemed to last several weeks. Fortunately, not at the same time.

Pat: Check about The Lost Girls because if you haven't read it you really should. I don't remember seeing you review it but I could be wrong. Great book.

Kay: Well, it was just a cold but it's surprising how low you can feel with 'just a cold'. LOL

The setting of The Lost Girls was indeed very vivid. I've always fancied visiting Minnesota and now I fancy it even more!

Margaret: I think you would enjoy The Lost Girls... your library might come up with a copy as mine did.

Thank you, yes I'm feeling a lot better now. Luckily I had no apts. to keep last week so was able to sit quietly feeling sorry for myself. LOL For a day or two I didn't even feel like reading.

I became allergic to cats and dogs about 15 years ago, I was never so before and have no idea what triggered it. I love cats and would like to have one but it would be no good at all.

Penny: The Lost Girls is so good. I love books set in American states with a very strong sense of place, which this one has.

These winter ills are a real nuisance. I had bug after Christmas as well. Ugh!

Cath,
I'm sorry to hear you had to endure a terrible cold, but one can certainly get a lot of reading done without feeling any guilt about it. I'm just getting over an equally horrendous misery, and as a result, I have read so much that I'm almost, but not quite, sick of reading! Not entirely, mind you, I could never be that tired of it that I couldn't read. Heavens no!

The Lost Girls sounds delicious! I love Minnesota as a setting too. I'll see if I can get a copy. Nice reviews, Cath! All that colds and flu have been going around over here too. Glad your feeling better.

Judith: Sorry to hear you've been ill as well. As long as I can find the right books I don't tend to get sick of reading. Sometimes several books in a row fail to appeal so I suspect that's my mood being wrong rather than that I'm sick of reading.

Peggy: Well worth searching out a copy of The Lost Girls as it's so immersed in the Minnesota setting.

Thank you, I'm much better now.