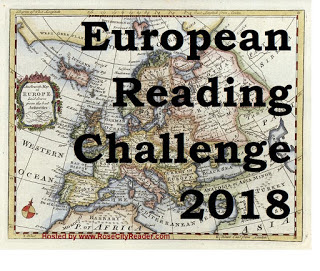 I'd almost decided that I was only going to do the What's in a Name Challenge next year - not the Mount TBR, because after all I will be reading some of my TBRs - and then you write about this challenge!

It's the looking for books and seeing if they will fit into the challenges that is so tempting and of course I do have books that means I could do the European Reading challenge - books set in Italy, Cyprus, France, Germany, Poland, Turkey and Spain - without reading any of the many books set in the UK!

The question remains - shall I or shan't I?

Ah, the temptation of challenges! Every year I swear I won't do them, but... This one sounds really good. I should just join a perpetual British challenge. I am, in fact, going to start adding a stat to my book lists saying what nationality the author is and where the book is set. I bet I'll find 90% are set in your land. Hopeless, hopeless Anglophile. I just saw a trailer for Together. Have you seen the movie? Looks dreadfully sad, but I wish I could go see it today. I could watch Sylvia Syms just washing the dishes. I think she is a marvel, and so beautiful.

Margaret: Yes, the most fun is to be got finding and choosing the books. I hope after a few months I still want to read them!

I must admit when I did this in 2016 I enjoyed it but not everyone is like us in that they already own books set in a nice handful of European countries.

I wonder if you've made up your mind yet. It's so hard.

Nan: I think a British challenge would suit you, LOL, but I can't say I've heard of one.

I'm afraid I don't know what Together is, not heard of the film... sorry.

Thanks for participating in the 2018 Challenge! How did you do?

The 2019 Challenge page is up now. I hope to see you back again! https://www.rosecityreader.com/p/2019-european-reading-challenge.html

Hi Gilion. I read 8 books for the 2018 European challenge and thoroughly enjoyed taking part. My wrap-up post is now up. Thanks for hosting!