A couple of reviews


First up, The Enchanted April by Elizabeth Von Arnim. 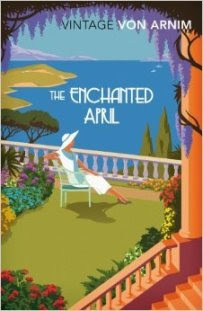 Lotty Wilkins, married to an austere, penny-pinching banker, sees a notice in The Times for an Italian castle available to let for a month. She'd love to go but can't see how it would be possible. She sees another member of her ladies' club, Rose Arbuthnot, reading the advert. Rose is married to an author of historical books, the salacious subjects of which Rose does not approve as she is rather religious. Lotty seizes her chance and persuades Rose that they should club together and hire the small Italian castle. After much persuasion Rose agrees and the two of them decide to find two more women to share the cost. Neither of them has any interest in asking their husbands to go. The two women they choose to share the castle with them are Lady Caroline Dester, a beautiful young woman who wants a month away from too many admiring men and a Mrs. Fisher an older woman, very set in her ways and used to giving orders. On arrival Lotty and Rose find the castle to be isolated and utterly magical, situated as it is on the coast amongst fabulous gardens. They are, however, shocked to find that Mrs. Fisher and Lady Caroline have arrived ahead of them and taken the best rooms and decided that bits of the garden and castle should be for their sole use. Is this a foretaste of things to come or will the castle weave its magic spell on four women searching for answers.

What a delight this book was. I loved Lotty and Rose and their daring spirits. Both were quite alarmed at what they'd done in leaving their husbands behind to go on this jaunt. From my 21st. century perspective this seemed acceptable but back in the 1920s it would be have been questionable to say the least. In Lotty's case I actually thought it served her husband right and loved how she blossomed in Italy. Very interesting hearing about life from Lady Caroline's point of view... how tedious things can be when you're very beautiful... she talks of people 'grabbing' her as though they own her, men never leaving her alone for two minutes, the envy of other women who assume she's after their husbands when she's not... quite the reverse in fact. On the surface this is a charming book about holidaying in Italy, but in reality it's much deeper than that. It's about different kinds of marriages and how women learn to cope and compromise and often rise above intense difficulties. And it's also about the magic of place and how that can have a huge impact on lives and events. Loved it. I've read Elizabeth Von Arnim's German Garden book but she's written a lot more and I'll be on the lookout for them now.


Next, Travellers in the Third Reich: The Rise of Fascism Through the Eyes of Everyday People by Julia Boyd. This is my fifth book for the 2018 European Reading Challenge covering the country of Germany. 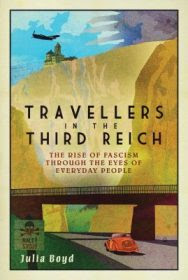 In 2013 I read A Time of Gifts by Patrick Leigh Fermor, about his walk across Europe in the 1930s, and by far the most interesting part for me was when he reached Germany and had to confront the rise of fascism there. I thought a book about other people's experiences of the rise of Nazi Germany would be an interesting thing, but failed to find anything. Five years later and here it is. The book begins its journey in 1919 with German reaction to the Treaty of Versailles which brought to an end the First World War. To say the population was resentful is a gross understatement and I gather it is widely accepted now that it was extremely harsh although I'm sure there are other opinions. Anyway, the situation was ripe for someone like Hitler to rise to power and restore German confidence and pride. How people visiting the country in the 1930s experienced this change is the subject of this book and it's handled very well. What I hadn't realised was the love affair that many foreigners had with Germany. The beauty of the country, its music, its culture, its friendly people, all were a huge draw, particularly for the British and the Americans. Despite new draconian rules and regulations, the persecution of the Jews and so on, tourists found the people unchanged. 'But'...

"Foreign visitors who concerned themselves with the plight of the Jews – and the majority did not – had to deal with an unanswerable question. How was it possible for these warm-hearted, genial people, noted for their work ethic and devotion to family values, to treat so many of their fellow Germans with such contempt and cruelty?"

What came over was how desperate ordinary Germans were for the British to approve of what was happening in Germany. The new government wanted a formal alliance but of course that didn't happen. What did happen was that right up the moment war broke out British parents were still sending their teenage children to Germany to take in the culture and learn the language. Author, Julia Boyd, is dumbfounded by this and I must admit I was surprised too. There's a lot to take in in this book but it's very readable indeed and I zoomed through it in a few days. For anyone thinking of trying to learn a bit more about WW2 this would be an excellent place to start as it explains a lot, puts various events into context and from it you can understand how war was inevitable. An excellent read and a keeper.

I gave both of these books a five star rating on Goodreads, not because they were perfect - they weren't - but because I couldn't stop reading either of them and was always keen to pick them up and read on. That says a lot because it's not always the case by any means.

Now there's a coincidence, I picked up the Enchanted April at the airport on our way out to Dubai last month, wanting something not too bulky to haul around . Like you, I loved it, and savoured it, not reading it too quickly, partly to enjoy the wonderfully witty writing and mostly because I didn't want it to end! Being transported to glorious Italian gardens in the heat and sand of Dubai was an interesting contrast. I researched it a bit and found that it has been made into a film at least twice so when we got back I bought the DVD of the BBC one but of course it lost most of the subtlety of the writing and didn't have as much of the glorious scenery as I'd hoped. If you would like to borrow it, though, just say! The book is now sitting at the top of my re-read pile as I suspect I may enjoy it just as much second time around. Btw, I was able to download the complete works of vonnArnim to my kindle for a couple of pounds, no fancy cover but still a bargain. Delightful reading and, as you say, a glimpse of a very different society for women.

Well you certainly did some traveling! So glad you liked them ! I am rolling along with a John Connelly book called "Drop". It's so hot here that I keep falling asleep when I read! lol oh well. You can read for both of us lol.

I have also really enjoyed The Enchanted April. It's been so long since I read it, would be nice to visit again.

Rosie: What an odd coincidence! I didn't want it to end either, I wanted to know what happened with Lady Caroline and George Briggs and so on. I have seen one adaptation... the one with Josie Lawrence, Miranda Richardson and the wonderful Michael Kitchen. But it's years ago so if that's the one you have then yes please I would love to see it again. Or even if it's another one I wouldn't mind seeing it. We must meet up some time in the summer, it would lovely to see you again.

My book was a library one, but I'm sure I'll be buying it for myself, either as a job lot for my Kindle, as you suggested, or as a one-off. We're away next week so I might see if I can spot it in a bookshop. I might do the Kindle thing anyway as I suspect some of her books are hard to find and not very cheap.

Pat: I really did do some wonderful travelling. LOL! John Connelly has a book out called 'Drop'? Not heard of that, will go and have a look.

Jeane: I think it's a book that really would bear rereading. I have a list of such books which I must get to... Anne Frank for instance.

Cath, both books sound wonderful. I am of German descent (maiden name is Brintzenhofe!) and I can’t fathom how a nation was taken in by such a monster! I downloaded several von Arnim books several years ago but have yet to read any. I got them free on Project Gutenberg I believe. Saw the film The Enchanted April and liked it. I really want to read the book now! I think it would be so much fun to do what these women did. Anyone up for a trip somewhere?!

Travellers in the Third Reich sounds very interesting. I tried to read the second book by Richard J. Evans about The Third Reich (the Third Reich in Power) and I could not finish it because it was so depressing. But this approach might be more readable. And I am interesting in the topic.

I will have to look into the movie Enchanted April just on the basis of having Michael Kitchen in it. I like his acting very much.

Peggy: I can't fathom it either but I suppose we're looking at it from a 21st century perspective. Plus, the general view is that back then the German character was such that they liked order and rules in society and Hitler brought plenty of that. My nephew spent a lot of time there back in his twenties (1990s) and says the people are still rather like that, they obey the rules. I think it's how they dragged themselves back up after WW2.

I'll have a look on PG for the Von Arnim books. Oh yes, I'd definitely be up for a trip to Italy, have always wanted to see The Med.

Tracy: I've not heard of the book by Richard Evans, will look into it. I suppose it is a depressing subject, how can it not be, but Travellers in the Third I found to be quite an upbeat sort of a book, certainly not depressing. It questions without wallowing in the subject.

Tracy: I forgot to say... I like Michael Kitchen very much as well. One our best British actors in my opinion.

?I used to be very happy to seek out this net-site.I wanted to thanks to your time for this glorious learn!! I definitely having fun with every little bit of it and I have you bookmarked to take a look at new stuff you weblog post. casino online