Fire in the Thatch


Having quite a good reading month thus far. Fire in the Thatch by E.C.R. Lorac is my 4th book for Bev's Mount TBR 2019 challenge, my 4th. book also for her Calendar of Crime challenge covering the April category of 'Month related item' (Church) and my 1st. book for the World at War challenge which is being hosted by Becky at Becky's Book Reviews and covering the category of 'A book set in England, Ireland or Scotland', (mine is England). 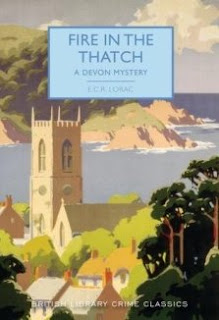 The Mallorys are a small group of villages deep in the English countryside somewhere near Tiverton in mid-Devon. Colonel St. Cyres lives there in a manor house with his daughter, Anne, and daughter-in-law, June, and her small son. They're living with the colonel as refugees from war-torn London - her husband is currently a POW in Japan - but June is not happy... Devon is far too quiet and humdrum for her and she's bored out of her mind. It's due to this that she tries to persuade her father-in-law to rent a cottage in the manor's grounds to some friends of hers from the capitol but the old man is having none of it, having heard rumours that June might be having an affair with one of the friends.

Instead Colonel St. Cyres rents the cottage to Nicholas Vaughan, an ex-naval man, invalided out of the navy having come close to being blinded. Nick is steady and a hard, meticulous worker and soon has 'Little Thatch' renovated and its garden rejuvenated after many years of neglect. He keeps himself to himself but people in the surrounding villages like and respect him.

It therefore comes as a tremendous shock when the cottage burns to the ground one night with Nick inside it. It's presumed to be an accident, but Nick's ex-commanding officer thinks otherwise and persuades Scotland Yard to send someone to check. Detective Inspector McDonald is dispatched and at first is inclined to agree with the official verdict of an accident caused by a chimney fire or electrical fault. But he soon realises that this verdict does not match with Vaughan's meticulous personality. Given the man's thorough and particular ways it seems unlikely in the extreme that he would be lax in matters of fires or electricity. It has to be murder but who on earth would want such a man dead?

Usually when you read a murder mystery of the vintage persuasion, the one that's been done away with is not all that pleasant. The rich head of the family for instance, who's horrible to one and all because he holds the purse strings and has fun manipulating people. A spiteful woman who knows everyone's business and spreads malicious gossip or writes poisonous letters... these are typical of the done away with that the reader isn't too botheried has been done in. But for me, Fire in the Thatch was different. Why? Because I desperately did not want the victim to die even though I'd deduced he was going to from the blurb on the cover. I loved reading how Nicholas Vaughan went about renovating the thatched cottage, his gardening... he was a good man and I was quite affected by his death. This is good writing, to make readers actually care about your characters and be very upset when they're killed.

I enjoyed the particular setting of this book because I live there. Not in a pretty Devon village, but in the nearest town, Tiverton, which is mentioned often. I can't say that I know where E.C.R. Lorac was thinking of for the group of hamlets known as The Mallorys but that doesn't mean they're not there as I don't know every village hereabouts and it seemed they were quite a few miles out in the countryside. (Not for nothing is there a village about 15 miles out of Tiverton called No Man's Land.) There are huge swathes of countryside in Devon that have nothing in them but farms and small villages and this is depicted beautifully, indeed I rather suspect the areas have not changed much in the 70 years since this book was written.

I gave this one 5 stars on Goodreads. I loved it. Gobbled it up in 2 days and had no idea until the last chapter who had done the deed. And I thought 'why' was quite clever too. I'm very pleased that I have several more by E.C.R. Lorac to read, two kindly given to me by Elaine at Random Jottings and a couple I bought for myself. Can't wait, excellent writer.

oh my gosh! If I read a murder book that took place in an area I knew that well I'd gobble it up too! It sounds like a good one! (I hate saying that because then I will look it up and I have far To Many books here! lol

Pat: It was weird to have them mention Tiverton such a lot. I wish I knew where she had in mind for the villages, maybe she didn't and just imagined them. But the woods and valleys of Devon were spot on, not to mention the thatched cottages.

I think I would feel like you, and it would be too sad for me that he was the one killed. What I love about the old mysteries is that it is almost always the "bad guy" who is killed. You do know you are so lucky to live there, right?!!

It was very sad, Nan. Most unusual that a good person was killed, although this is of course much more like real life than your average whodunit. But I don't necessarly want to read books that reflect real life in all its brutality.

Yes, I do know know how lucky I am. And I feel the same way about where you live... LOL!

Hi Cath,
Oh, I can't tell you how eager I am to read this one.
It's been on my radar, and I know I will be speedily getting a hold of it, and then devouring it, once I find a copy. We are able to get these.
Lovely!
Thanks for the review.

Hi Judith, I think you will absolutely love this. I hope so anyway, it's so beautifully written and so very English.