Evening Class by Maeve Binchy is my second book for the European Reading Challenge 2020, which is being hosted by Rose City Reader. It covers the country of 'Ireland'. 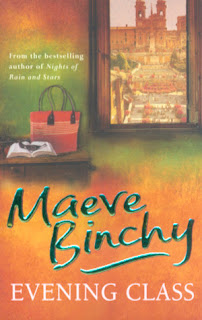 Aidan Dunne, staid, a bit plodding, but clever, teaches Latin in a secondary school in Dublin. The head of the school is retiring and Aidan is quietly confident that he will get the position. At home, his wife and two grown-up daughters ignore him so he needs this new role to restore some pride in himself and to give him a renewed purpose in life.

Nora O'Donoghue has recently returned to Ireland after 20 years living in a small village in Sicily. She went there following the love of her life, Mario, whom she'd had an affair with in London. When he returned to Italy to marry a woman his family had always assumed he would marry, Nora went too, much to Mario's disgust. She took up residence opposite the hotel he owned, became known to the villagers as 'Signora', and stayed there until he died in a car accident. Up to then her presence in the village had been tolerated and she had friends, but suddenly it's made clear to her that she must go for the sake of the widow. Back in Ireland, estranged from her family, she has to build a new life for herself.

The headship does not come Aidan's way. Instead he's offered a chance he's always wanted, that of setting up evening classes at the school. One of these classes will be 'Italian' as Aidan is very much in love with that country and its language, but first he has to find a teacher and thirty people who want to attend the lessons.

Well of course there's a lot more to the book than that brief introduction, it is after all 400 pages long (540 in some versions). There's quite a large cast of characters and about half a dozen of them get long chapters to themselves. There's Bill the staid Bank Officer who falls in love with vivacious spendthrift Lizzie. There's Fran trying to give her teenage sister, Kathy, a better start in life than she had by encouraging her in her studies. There's Lou, indulging in petty crime that slowly becomes not so petty until he meets Suzi, a waitress with ambitions. And there's Laddy with learning difficulties who wants to go to Italy. Each one is somehow connected to another character, or a member of that character's family, but doesn't always realise it, a bit like 'six degrees of separation'. And you don't always realise it either, or at least I didn't, until there's a small moment of revelation and you think, 'Oh, that's so and so's daughter' or 'That's thingy's mother'.

The pivotal character in the book is the Signora... Nora O'Donaghue. It's her that has the ability to bring people together to solve problems: after 20 years of waiting for Mario she's learnt patience and tolerance, a sort of modest quietness that somehow inspires people to do their best so as not to let her down. She's a gentle soul who acts as a catalyst for a whole group of people whose lives are far from perfect, in some cases tragic, somehow or other enhancing their lives in ways they could never have imagined when they signed up to learn a new language.

This is my first book by Maeve Binchy. I'd heard of the Irish author of course (she died in 2012, aged 72) and knew how popular her books were. I just didn't think they were my kind of thing which only goes to show how very wrong you can be. I absolutely loved Evening Class, such beautiful story telling about real people with what seem like insurmountable problems but stressing that there's always hope, always a way out, a solution, if you just set your mind to it... ask for help from your friends. I'm certain this won't be the last book I read by this author, she wrote seventeen books, I just need to work out which of them will appeal to me next.

Wow, that was a big one! I have a number of huge ones here I'd be lucky if I read one in a whole month.! (although I read Drood pretty quick .. for me that is lol)

I don't think I've ever read a book by Maeve Binchy either, but this one sounds really good - and like one that I would have to create my own character-tree for if I was going to have much of a chance of keeping up with all the links between the characters.

Pat: Yeah, it was quite hefty but I flew through it in 3 or 4 sittings as it was so good. I read Drood much quicker than I thought I would too and I think that was about 1000 pages, right?

Sam: You know, I never thought of a character tree for this book, it would be *so* useful. Plus, fun to play 'spot the connections' as you read.

You really made me laugh with your evening class assumption. I've never done one, thought about it often, just not done it. I think it's a committment problem, we go away on short breaks quite often and that would mean missing lessons and it would worry me.

I haven't read anything by Binchy either, and the characters sound very interesting. Although some of them sound very sad too. I will be interested to hear what you think of more of the books as you try them.

Tracy: I was surprised at how interested I became in the characters and their lives. Yes, some of it was sad but problems were solved, lives moved on, and people grew or changed in a most satisfying way.