Yet another catch-up post from me. I'm reading quicker than I can review at the moment and two of these books are from May!

The Nine Of Us: Growing up Kennedy - Jean Kennedy Smith. This my second book for Carl's Venture Forth and covers the prompt, 'A non-fiction book'. 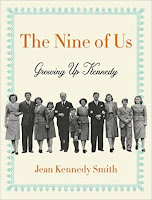 Well, everyone knows who the Kennedys are so they need no introduction from me. Jean Kennedy was the eighth of their nine children (Teddy being the ninth and final child) born in 1928 and still alive at 92. She wrote The Nine of Us in 2016... I hope my mind is as agile as this when I'm 88. Anyway, if you're looking for a forthright book about the family, warts and all, this is not it. This is a delightful book about childhood in what must have been one of the closest-knit families in the world. It read like an Enid Blyton novel, wonderful summers at Hyannis Port on Cape Cod, sailing, swimming, playing games. Their parents, Joe and Rose Kennedy, took parenting very seriously and you can't help but be impressed when reading the way they went about creating thinking, politically aware children and adults. I loved this book to bits but it left me with a lot of questions so I'm now reading, Jack: A Life Like No Other by Geoffrey Perret and that of course is answering a few of them, not in a mean spirited way but in an honest and straightforward manner.

Next, The Farm at the Edge of the World by Sarah Vaughan. This is my third book for Carl's Venture Forth covering the category of 'A Checkout from my local Library'. It's also my first book for #ProjectPlaces2020 which is being hosted by Rosemary at Scones and Chaise Longues.

Lucy is a paediatric nurse living and working in London and married to Matt. After making a mistake which could've killed a young baby (it didn't) and discovering that Matt has been having an affair she leaves London and goes home to the family farm in North Cornwall to clear her head. The farm is run by her mother, Judith, and brother Tom... her father died a few years back. Also living there is Maggie, Lucy's elderly grandmother, who was a teenager during the war. Lucy has always had the feeling that there are things the family doesn't know about Maggie's experiences during the conflict. Will they ever learn what these secrets are? Yes, an elderly woman has taken one of the holiday cottages on the farm for two weeks and eventually the truth will out. My daughter passed this library book on to me months ago and I'm only just getting to it as I've been concentrating on getting Mount TBR down a bit during lockdown. I thought it started a bit slowly but looking back I can see that that was necessary as there's a lot of history to relate and a very definite sense of place to establish and build on. I know the area this is set in, the coast not far from the beautiful town of Padstow and including Bodmin Moor. The isolated farm is so typical of remote Cornish farms and of course in the 1940s it would've been even more remote because communications were not as they are now. As such, it's a perfect setting for a novel like this which combines a coming of age theme with survival during the war, a secret love and the desperation that results from that. There's even a couple of nice little twists at the end. I'm not sure why I was surprised that I liked this so much, I suspect the cover led me to expect a different kind of book, something a bit more cosy perhaps. There is a lot of beauty and love in this book, but cosy it is not.

Lastly, Footnotes: A Journey Round Britain in the Company of Great Writers by Peter Fiennes. This is my eighth book for Bev's Mount TBR 2020 and my seventh book for the European Reading challenge 2020, which is being hosted by Rose City Reader; it covers the country of 'The UK'.

Peter Fiennes' reason for writing this book can be summed up with this quote:

'Who are we? What do we want? They seemed like good questions to ask, in the company of our greatest writers, given these restless times'.

Fiennes decides to travel around the UK following in the footsteps of some of our most iconic writers. He begins his travels in Dorset with Enid Blyton who apparently always holidayed in Swanage. He believes her influence runs deep in all of us Brits and I think he's correct. She doesn't get a good press here for one reason or another and he suspects she was banned by the BBC too. As a child I read her avidly and then went on to read other books. So did my daughters and I know many other readers who had this experience. Perhaps a similar set of books these days would be Harry Potter, much maligned but incredibly popular and they get kids reading. Anyway, I liked the author's treatment of Enid, pros and cons, balanced. Next come two chapters on the travels of Wilkie Collins in Cornwall, fascinating and hilarious, I must read the actual book, Rambles Beyond Railways, a slim volume that I own. Celia Fiennes comes next (the author's cousin 10 times removed) a woman who went around Britain in the 1680s on a horse, impressive now, let alone then. Gerald of Wales (1188), Violet Martin and Edith Somerville, J.B Priestly, Beryl Bainbridge, and then Dickens and Wilkie Collins again travelling from Cumberland to Doncaster. There's a chapter on Samuel Johnson and James Boswell in Scotland, wonderful insight into those two. The book finishes with Dickens' last journey in a coffin, to Westminster Abbey, where he did not want to be buried apparently. So why do that? A bit much if you can't have a say in where they put you when you're dead, famous writer or no famous writer.

Anyway. I loved this book to bits. Yes, it was interesting, I learned a lot about what some of these world famous writers were really like, their quirks, their various travels and travails and so on. But most of all I loved Peter Fiennes's writing style. He's funny and down to earth and tells you the things you really want to know not a load of dry information. 'Real' writing. I've been reading pretty intensely from my tbr mountain during lockdown to try and remove a few books off the shelves and into the charity shop box. But this one's not going anywhere: I love it too much and it will be reread at some stage. After I'd finished it I immediately went to Amazon and downloaded his first book, Oak and Ash and Thorn: The Ancient Woods and New Forests of Britain. (I love that he took the title from Puck of Pook's Hill by Rudyard Kipling and naturally that made me get my copy of that out to reread.) I can't wait to read it or to see what he comes up with next, whatever it is I'll buy it.

You never cease to amaze me <3 .. I just received The Nine of Us in the mail the other day.. It might be a bit until I get to it as I am in the midst of Thomas DeQuincy. Murder as a Fine Art. I forgot how good it was! I don't know how you manage to read more than one book at a time..! I wouldn't remember what happened last time I put it down!

You're really knocking off those reading challenges. Way to go! :)

As I mentioned on Pat's site and her review, the Footnotes book sounds amazing. I will definitely be adding that to my "Books to Buy" list on Amazon...and I just stepped away briefly and did just that! :)

One of these days Mary and I would love to visit England and do our own literary tour of the area.

Footnotes sounds very good. Reading about authors I know very little about is the biggest draw for me. I am glad you liked it enough to hold onto it for a reread.

Pat: When I read three books at a time they all have to be different so that I don't mix them up. I couldn't, for instance, read three murder mysteries at once, that would confuse me. Mind you that's not hard...

I hope you enjoy the Kennedy book, it's one to read as slight as light relief... really charming.

Lark: Well, I've almost finished the two I started at the beginning of the year so need more. LOL

Carl: I think anyone who reads would love Footnotes... so interesting and funny.

Tracy: Yes, there were a few authors I hadn't read, J.B. Priestly for instance and I didn't know who Celia Fiennes was... or Gerald of Wales from 1188. That all made it even more interesting in my opinion.

Hi Cath,
Sometimes it's wonderful to be reminded that the Kennedys had some light-hearted, really enjoyable times. Jean, as a child totally out of the loop of the angst of the older children, can provide a bird's eye view of her perspective of the family, which is really valuable. I'd like to read it! If only for another perspective.
Footnotes sounds really interesting!
And Farm at the Edge of the World I'm eager to read. Will look them all up! Thank you.

"Footnotes" sounds really good. I love books like that one and in better days would have been tempted to get in the car and travel along with my reading of the book.

Now you have me curious. Why in the world would Enid Blyton be banned by the BBC? I haven't read her, only know the name, but I had no idea she was frowned upon by certain folk to that degree.

Judith: I think this is the most unique perspective of the Kennedy family I've read. It was completely charmimg although it did touch briefly on some of the tragedy, Joe's death in the war, Rosemary's operation etc. You would not have known from it though that Jack suffered from terrible ill-health for most of his life. But still, it was fascinating for the view of her childhood that she remembered.

Footnotes is wonderful. And I really think you would like The Farm at the Edge of the World.

Sam: Footnotes is a real readers' book in my opinion. And I just love a book about books.

Enid Blyton was not thought to be challenging enough reading for children, also too middle-class, that sort of thing. It wasn't until the 90s that they caved in and dramatised some of her stories. One of my daughters' teachers loathed her for the same reasons but both my daughters were avid readers and read other things as well, and Blyton turned them into adults who are still avid readers of all kinds of books.

Ooh I'm interested in The Farm at the Edge of the World. I'm rereading Daphne Du Maurier and all things Cornwall.