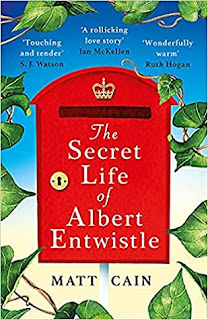 Albert Entwistle has been a postman in the northern town of Toddington for most of his life. He's now 64 and since his bullying mother died he's lived on his own with his beloved cat, Gracie. Albert keeps himself to himself, the other postmen and women, though friendly, hardly seem to notice him and Albert likes it that way. In fact, he encourages it. A lot of effort is put into making sure that people ignore him because Albert is keeping a huge secret.

Things would doubtless have continued in this manner but for two things. Albert forgets that 65 is looming and that means the Post Office will retire him... and they do. And no more than a few days later his beloved Gracie dies peacefully in her sleep. Misery consumes him. He thinks back to the only time in his life that he was truly happy.

Aged 16 and in his final year, a new boy arrives at Albert's school.

He's tall and slim, with delicate features and hair that when it catches the light looks like burnt gold and reminds Albert of the grass on the moors in winter. But it's his eyes that are most striking; eyes that are such an intense shade of blue they border on violet. Albert finds it difficult to take his eyes off them.'

Of course, Albert already knew he was different to the other boys, knew how important it was that his friends not notice he had no interest in the girls they pursued with such singlemindedness. Not just because he would be bullied mercilessly if they knew but also because his father was a policeman and back in the sixties and seventies, homosexuality was a crime, punishable with a prison sentence.

Lost after the death of Gracie, Albert wanders into his mother's old room. It hasn't change since she died, because he hasn't been able to bring himself to touch it. He finds himself looking among her things and there's a box in the wardrobe. Inside, little precious things she had kept and amongst them, a photo of Albert with George Atkinson.

So this was one of those fortuitous, random grabs from the library.What with Covid and lockdowns I'd almost forgotten what it was like to grab a random book but this one was on a table amongst other newish arrivals and I was taken by its bright cover. Looking inside and reading the blurb, I was intrigued and brought it home.

It's quite a sad book in many ways. The manner in which Albert keeps the world at bay, how frightened he is when anyone speaks to him or he has to make an effort to be sociable or nice, even to the point of only exchanging a few words with a lonely old lady on his round and then scarpering. 'But' things change and change rapidly and it's delightful to see how Albert blossoms and what makes him do it and how people react to the massive change in him.

The quest he embarks on is joyous to read about. There's a bit of a double timeline, mostly it's present day but we also read about what happened with Albert and George (not at all in an explicit manner) and to be honest it just makes you grieve for all the men and women this has happened to throughout the years. The intolerance was appalling and still hasn't completely gone away although things are now 'much' better.

A delightful read, well written, the author, Matt Cain, is himself gay I believe so knows of what he speaks. The characters just jump off the page at you and Albert especially is wonderful. Definitely a book about daring to be who you really are. Loved it.

I so love the sound of this and I've never heard of it before. Beautiful review Cath.

Albert's story does sound very sad. I hope he gets a happy ending!

This sounds like a wonderful book, Cath. I will looking out for it. It is out here in hardback but I might wait until it comes out in paperback.

It does sound intriguing - sad, but joyous too, and 'Albert Entwistle' is such a good, old fashioned name. I'll see if my library has a copy.

Diane: Thank you. I think it's fairly new out in the UK.

Tracy: You might be lucky and find it in the library eventually. Or cheap for Kindle at some stage. (Sorry, I can't remember whether you're a library and/or Kindle person.)

Margaret: It was different to my usual reading matter and thus rather refreshing. The book was very much of the north so Albert Entwistle was a perfect choice of name.

This sounds really good, Cath. And to stumble upon it so randomly must make it seem even more special. I've kind of forgotten how much fun it can be to pick up a book you know so little about and end up finding yourself completely taken by it. I suppose I got out of that habit when it was so difficult/impossible to browse the shelves in bookstores and libraries. I've gotten into the habit of so carefully planning my future reading that maybe some of that innocent joy has been lost.

Oh Cath, this sounds lovely! I am certain I'd enjoy it too. I'll have to put it on my 'tbr' list. I need to read some fiction and this sounds just up my street! I'm quite tempted to rush of and buy it now.

By the way, sorry to put this here, but just in case you don't see my other messages, Lisa Rose Wright has tried messaging you to ask if she can use a part of your blog review on her Amazon author page. Could you either contact her direct or let me know? Thank you so much!

Sam: I've always been aware that random grabs can often be very rewarding, I just don't indulge very often, before Covid I mean. I think I'm a bit too stuck in the 'only take books you know you'll like by authors that're familiar' thing. Plus there always seem to be reservations to pick up. Also, as you say, careful planning is really the death of spontaneity.

Val: It really is a delightful, joyful sort of read.

Lisa has duly been contacted. :-)