The Stranger Diaries by Elly Griffiths has been on my Kindle for a couple of years now. What I hadn't really realised was how gothicky it is and how suited it is to autumn reading and when I was reminded of this recently I plumped for it as an October read. (It's set at this time of year too.) 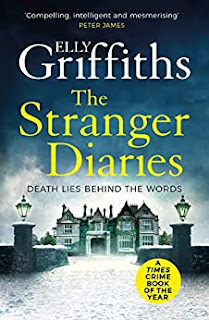 Clare Cassidy teaches English Lit at a local comprehensive in East Sussex, on the south coast of England. The school is an odd mix of very modern buildings and an old mansion house where a writer used to live many years ago. The writer, R.M. Holland, is only famous for one thing, a short story entitled, The Stranger. Clare is fascinated by this story and the author, to the point of being in the middle of writing an autobiography on his life. The mansion is reputed to be haunted by the ghost of Holland's wife who reputedly fell down the stairs. No one knows whether she fell or was pushed. And the other mystery is whether or not the couple had a daughter. 'Marianna' is mentioned in the author's letters but did she exist and what happened to her?

The school where Clare works, Talgarth High, is the usual mix of hundreds of kids and teachers who, on the surface get on, but underneath there are simmering tensions and a lot of competiveness and pettiness. One of Clare's best friends is another English teacher, Ella, they started their jobs at the same time and are both single. When Ella is found dead in her cottage the shock waves reverberate around the school. She's been stabbed multiple times and a quote from Holland's story (and The Tempest) 'Hell is empty' has been left by the body.

Clare immediately finds herself a suspect in the murder case. DS Harbinder Kaur and DS Neil Winston are the investigating officers and Kaur, of Indian descent, dislikes Clare on sight. But Clare has priorities that they don't know about. Not only does she have secrets to keep about Ella, she also has a teenage daughter, Georgia, to keep out of trouble and an ex-husband to keep off her back. It's like a juggling act... and life is complicated enough without the sudden knowledge that they're all in real danger from a murderer.

Well, this one is one of those multi-layered stories that twists and turns all over the place. I loved the fact that it's based around a vintage ghost story the likes of which I've read hundreds of. The start of the tale, with a man telling a fellow passenger on a train the terrible events that happened to him when he was a boy at school, is so quintessential to many ghost stories. (The story is revealed in full at the end of the book.) Also playing a part is The Woman in White by Wilkie Collins. The book being written in the same style, ie. chapters from different character's points of view - Clare, Harbinder, Georgia. In fact this is quite a good book for people who like books about books.

The main investigator, Harbinder Kaur, is not your average detective. Not only is she British Indian, she's a lesbian, in her thirties, still living with her parents and they don't know she's a lesbian. I love the mother, always hoping her daughter will find a nice chap! Harbinder is also not a happy camper, she's cynical and quite angry... the reason for this is not fully explained although it's clear that growing up her brothers came first. It makes her very interesting and I hope subsequent books will address this.

I had no clue who'd done the deed so the outcome was a surprise, and so was the reason for it all... I don't suppose this was unique, others who've read more crime fic than me would know, but it seemed very different to me. All in all, a pretty good start to what is, I gather, a new series about DS Harbinder Kaur. It should prove interesting with book two, The Postscript Murders, already out.

I have this one as well and haven't read it yet. Glad you seemed to enjoy it.

Oh, I'm glad you liked this one, Cath! I read it a while back and thought it was a lot of fun and, yes, perfect for this time of year. I do have the next book in the series, but I haven't tried it as yet. Soon, perhaps. I liked how this seems to be Elly Griffiths' 'hat-tip' to various Gothic classics. I do love Gothics!

Ooh! I am definitely adding this one to my 'wish list' it sounds right up my street.

Certain aspects of it sound like a book I read a few months back called 'Madam' by Phoebe Wynn, but I know it's probably not such a close match in reality, It's just what came to mind as I started reading.

I have a few Elly Griffiths books on my Kindle ready to read, as I like her writing style and characters, but not this one, so I am off to check out my options now!

I see that book #2 in the series 'The Postscript Murders' comes out next March.

Thanks for such a thoughtful review and have a lovely weekend :)

I read this one two years ago and really enjoyed it. I liked Clare, and her daughter Georgia, and Harbinder, too. And I thought it was interesting how the author wove in the fictional story with the rest of the novel. I didn't guess the killer either, but I had fun reading this book. :)

I read this and liked it very much. I do hope you enjoy it too.

Sounds like fun, Cath, and perfect for the season, as you say.

That it's been on your Kindle, quietly waiting its turn, for two years reminds me of how many dozens of books are on mine doing exactly the same. No matter how fast I read or how many books get read, I still seem to acquire them at an even quicker pace. But I'm not going to complain...

I liked this book a lot, Cath, and that surprised me. I liked all the elements you mentioned, especially the many references to books throughout. And the structure similar to The Woman in White was also a plus. I even liked the ghost story.

Right now I have books from three of Griffiths' series on my TBR pile, but the one I most want to get to soon is The Postscript Murders.

Diane: I hope you enjoy as much as I did when you get to it!

Kay: Oh yes, I definitely felt this was Elly Griffiths' homage to gothic literature. I definitely plan to read book 2.

Yvonne: I'll look up the book you mentioned, 'Madam'.

Yes, I enjoy Elly Griffiths' writing style too though I freely admit she's not for everyone. Some don't care for her frequent use of the present tense when writing. I'm not sure but I think book 2 is already out.

Lark: I was actually surprised to like this one so much. I know I love her Ruth Galloway books but often I like one series by an author but not another. Glad it wasn't just me who didn't guess the killer.

Mystica: I liked it a lot thanks.

Sam: Well I hadn't put any books on my Kindle for at least a week... then Thursday arrived and I found myself buying FOUR! For some reason I absolutely 'had' to have all of them! Lost cause...

Tracy: It surprised me to like this book a lot too. I think I really wasn't expecting a book about books and it was a lovely surprise. I'll definitely be reading The Postscript Murders at some stage.

I really liked this too although was surprised by the killer (I guess there were clues I missed). I wondered if she planned it to be a one-off then became fascinated by the Harbinder character or if it was her plan all along. She seems to write quickly and her publisher probably only wants one Ruth book per year so it is smart to create some other series. I listened to the first of the other newish series on audio recently and liked it although it started off slowly - The Zig Zag Man, I think.