Well now, Abarat by Clive Barker is my first book for the Seafaring challenge which is being run by I Heart Paperbacks. It goes on until the 31st. Januaury so I'm quite pleased that I have the first of my four books under my belt already. 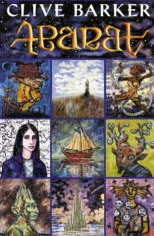 I'd never read anything by horror writer, Clive Barker, before so didn't have much idea of what to expect. *Different* is what this book for young adults turned out to be. Quite original, imo, but it's quite hard to put my finger on why that is.

The book's main character is Candy Quackenbush, a teenage girl living a less than fascinating life and with an abusive father in Chickentown, Minnesota. She gets embroiled in the problems of 'Mischief', an individual with not only his own head but about nine small ones who are all his brothers. Thus she finds herself transported to the land of Abarat, an archipeligo of islands where each island is always at a particular hour of the day. As would be expected of a fantasy/horror story the book is peopled by some very strange characters that Candy meets along the way, some friends, some foes. Christopher Carrion is the main villain of the peace (I can't even *begin* to describe him). For one reason or another he is compelled to capture Candy, but there are plenty of other not so obvious villains in this very weird universe and all are pretty fascinating. Likewise all the different islands - this book is choc-full of imaginative ideas.

Abarat is the first in a series so is a kind of scene setter if you like. Not sure how many have been written but I know there's a part two. The book itself is lavishly illustrated with paintings by Barker which help to make this a unique book - and the characters are so weird that this is actually very helpful. The book itself is very readable, and a *quick* read but somehow I was never really set alight by it. It was good but not wonderful. I also expected more sea travel than there actually was. There is *some*, enough to qualify it for the challenge, and it's certainly a very watery world, which is something that appeals to me a lot. Will I pick up any sequels? To tell the truth I'm not sure... maybe search for them in the library, which is where I actually found this.
Posted by Cath at 19:53