I'm reading quite a lot at the moment, partly due to life becoming ever so slightly less busy but also to the fact that I'm still ill with the same cold bug I've had for about a month now. So I've been curling up in front of the fire with a book whenever possible. I love this time of year, autumn and winter are two seasons I really enjoy, but goodness how I hate the winter ills. There's a reason for them of course - in a word: grandchildren. What they get, you get. First it was the grand-daughter, but now that she's seven and seems to catch less her place has been taken by the grandson who generously shares all that he picks up during his two days at nursery. LOL. Ah well, this too shall pass. 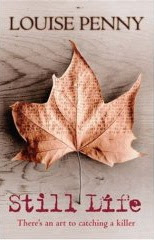 Anyway, my latest read is one of the library books I trekked all over the county to find. It's Still Life by Louise Penny. I saw this recommended by Kay at My Random Acts of Reading and, even though I'm not really a keen reader of crime fiction, for some reason it appealed.

A little about the book. It's set in a small village in southern Quebec. Jane Neal is found dead in the forest on Thanksgiving morning; she's been shot by an arrow. Chief Inspector Armand Gamache and his team are brought in to investigate and it proves a difficult case. Jane was an elderly resident, retired school teacher and part of a very close knit group of friends. It soon becomes clear that the murderer has to be someone local, a friend therefore. Secrets begin to emerge, as they are wont to do, and Gamache has his work cut out to sort out the facts and solve the mystery.

This was such a good read. When I was a teenager I had this thing about wanting to emigrate to Canada. I never did of course but books about Canada have ever since held a special fascination for me. I had a very real sense of place from this book. The author made me feel as though I were really in Three Pines in the autumn and that's very skillful in my opinion. As to the plot, well, I didn't guess whodunit, I was quite wrong. LOL. I very much enjoyed the character of Armand Gamache and got close to all the other characters in the village; I even felt I knew the dead woman very well. And there were unusual things about the book which I won't go into but which all added to my enjoyment. Thank you to Kay for blogging about this book, I definitely plan to read the two other in the series as soon as can get hold of them.
Posted by Cath at 08:34

Cath, I'm so glad that you liked this book. I also enjoyed it so much and have been telling everyone about it. Hope you can track down the next two and that you like them as well. Take care of yourself and keep warm. Hope your cold subsides. I had one a couple of weeks ago and it was not fun.

I'm not big on mysteries but this sounds good.. it will have to wait quite a while though since I just ordered some books and have a tbr pile before they get here! lol..

ya gotta love when kids and grandkids share their illnesses with you!

Kay: I absolutely loved Still Life. I got so involved in all the character's lives and enjoyed the setting so much. I know the third book is in our local Waterstones and I'll check the library catalogue for the second but it has such a pretty cover I'll probably order it from Amazon rather than trek all over Devon to find it. It would probably cost more in petrol anyway than the cost of the book! LOL.

Thanks for your kind wishes about this silly cold.

deslily: I'm not big on mysteries either, my natural niche is sci fi and fantasy. I am learning to like the odd mystery but it has to have something a bit different about it such as being an historical mystery or set somewhere unusual. In this case - Quebec. I don't think I will ever be a crime buff though.

Yeah, you can't fault kids for their generosity can you? ;-D

Hi Cath,
I'm sending you lots of sympathy to help you fight off your cold. We spent Thanksgiving with our Grandboy, as you know, and now I'm fighting a cold, too! It sounds like the best thing to do is take some time off and snuggle in with a good mystery!

Thanks for your sympathy, Robin, it's very much appreciated. And I'm really sorry to hear that the same thing has happened to you. We're lucky in that we're retired and, other than the two days a week we look after the grandson, we can take the time off to get better. It's not so easy when you have a job like yours. I do hope you get better soon.

The book sounds interesting! Sorry to hear about your cold. My little one has had a cough going on for weeks and now seems to have added a new bug to the mix. My husband has it too, I've been lucky to miss out on it so far. Winter is hard for us too, with the kid bugs. She never seems too bothered, but I get really sick.

Tara: I'm keeping my fingers crossed that you escape the cold/bug that the rest of your family have. Life is hectic enough without being slowed down by these illnesses. And adults always get it worse than the children, who seem to shrug it off whereas we're ill for weeks and weeks. I hope you stay well.

Sorry to hear you're still suffering, hope your cold clears up soon. Sounds an intriguing read despite crime not being my thing.

I was so surprised to stop in just now and read your review, for I just posted about the second book today! I agree with all you wrote about Still Life. The fun of the second book is that it is set at Christmastime, but not much "good will toward men" going on. :<)

Nan: I enjoyed reading your review of book 2. I was confused about how many books there actually are until I realised that Fatal Grace is also known as Dead Cold... not sure which is the UK/Canadian title and which is the US though. I'm easily confused, but will sort it out and hopefully order the right one. :-)

Cath, Dead Cold is the Canadian/UK title and Fatal Grace is the US title. The 3rd book is called The Cruelest Month and I think will have the same title for everyone. It is out in Canada/UK but will not come out in US until March '08.

Thanks for clarifying that, Kay. I don't understand why the same titles can't be used for all. It would be much less confusing.

Thanks for the great review. I'm trying to read Canadian authors for the Canadian Authors challenge. I've added this one to my list.

Bookgal: Oh yes, this would be a good one for a Canadian book challenge! Good luck with it!