What better day to review a book about World War One than Remembrance Sunday. The First Casualty by Ben Elton has been sitting on my tbr pile since the Christmas before last and I've been meaning to read it for ages. To be honest I'm glad I didn't as this week has seemed like the perfect time with so much else about the subject on the TV. 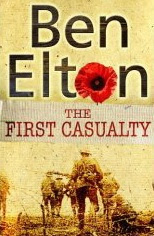 First, a bit about the book. The story concerns one Douglas Kingsley, a senior policeman in London, who is imprisoned for being a conscientious objector during WW1. In the process he loses his family (wife and child) who disown him and is very badly mauled by both inmates and warders of Wormwood Scrubs. His death is 'arranged' and the next thing he knows he's on the way to Ypres to investigate the death of Alan Abercrombie, an officer and son of a cabinet minister, who is listed as 'killed in action' but who has in fact been murdered.

If you were expecting a simple crime story from this book (and I was) you'd be vastly mistaken. How silly of me to expect a man like Ben Elton to write a simple story! For those who don't know, Ben Elton first made his name in Britain as a stand-up comedian, the sort specialising in social and political commentary. Since then he's become a writer in earnest, of various TV series such as Blackadder and The Thin Blue Line, and books. He's not everybody's cup of tea but I like him because he says what he thinks and no messing. And that kind of describes this book really. He minces no words whatsoever when telling us of the opinions of policeman, Kingsley, and from the perspective of almost a hundred years, he makes a lot of sense. Of course, things are never *that* simple and, to his credit, he does stress that. Conditions at the front are also described very graphically. There are descriptions of ways to die in battle, injuries, bodily functions, sex, homosexuality, you name it. If you're not keen on that kind of thing then this may not be the book for you. On the other hand if you can stand it, and are interested in WWI, then this book is a real gem.

So, yes, I'm sure you've gathered that I liked this book. I took three days to read it when I expected to take five or six because it's a heftyish tome. It's a page turner and no mistake; I couldn't put it down. So, will I rush out now and get more books by Elton? Probably not, because this is not his normal kind of output - I think he usually writes modern novels and I'm not sure they'd be my thing. But The First Casualty most certainly was and I'm really hoping he'll do more in a similar vein in the future.
Posted by Cath at 15:35

This sounds a very interesting book. I'm not sure I could take the gory stuff, but I'm certainly going to check this one out. Thanks for the review.

Well, it isn't gory in the sense that he dwells on the blood and gore, he just says what actually happens, matter-of-factly really. And in a way thats more shocking because you're not expecting it. It's certainly one of the best WWI books I've read. Birdsong by Sebastian Faulks being another if you can get past the first few chapters and, although it's brilliant, you are quite relieved to get to the end of it. I don't know nearly enough about either of the world wars though, something I must put right.

I've just checked the online library catalogue and there is a copy in my local library - currently on the shelf. I hope it's still there when I next get there - maybe tomorrow. If not I'll make a note and look for it later - I've got plenty to read at the moment!

It sounds uncomfortable to read, but very worthwhile, both in terms of being a good read, and as a reminder that violence isn't exciting, as so many TV programmes suggest.

I must admit, I didn't know Ben Elton wrote serious books. I had him pigeon holed for comedy. It's all too easy to stereotype people, isn't it? but that's no excuse for doing just that.

I'll have a look for it when I have time - I'm trying to steer clear of any mental commitment at the moment as the editor is working on my MS "today" and the publisher wants the final copy "asap"... so I'm just procrastinating pleasantly here while I wait (when I should be working.... but it's nearly lunch time!)

Hi Leigh. I don't think Ben Elton does do 'serious' but possibly his other books make a point through comedy? It's hard to say as I've never really felt inspired to read any of them apart from The First Casualty. I'm probably doing him a real disservice. As you say - pigeon holing - and I'm as guilty of it as anyone.

Congratulations on having your book published. I spent an engaging half hour reading your blog, you have some very interesting things to say.