This post is really for my own records. I wanted to list the various series I'd started just to get some idea of which ones I was reading and how far I'd got with each one. Once I began I was absolutely horrified at the sheer number, not only of those where I'd read only one or two, but of the number I plan to read! Hopefully this post will help me keep track of them and maybe inspire me to finish some. 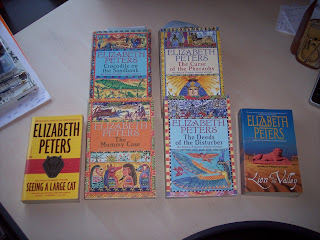 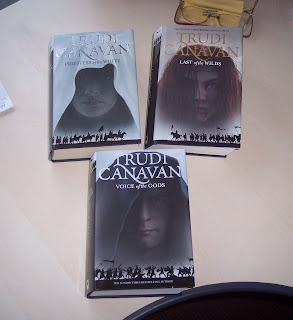 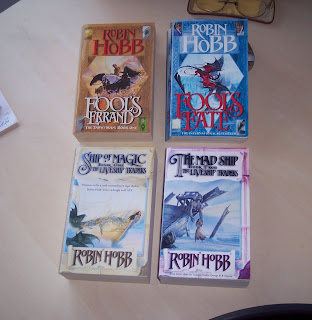 lol, I know how you feel. I have 17 on the go. And a while ago I promised not to start any more until I finished some, but I started The Dark is Rising sequence after that :P

hmmm I'll have to look around and see what series I am still reading.. shhh lol
I've read all the Inkheart series, and 2 of the 3 Inheritance (and have the 3rd book here) I caught up on Pern too LOL but a few I want to reread yet.

I finished the Mary Russell books except for the new one that comes out in April.
I've read 3 Greengable books and the others are only in mass paperback so don't know if I'll ever finish those.

I need to make a list like yours..
and yes.. we are related, no doubt in my mind! LOL LOL.

Oh heck, Nymeth, I *forgot* the Dark is Rising sequence. Will add those in a minute as I have two of them on my shelves. I think the problem is that many of the first books of a series are very good and therefore people want *more*. And i'm absolutely fine with that to be honest. :-)

Yes, Pat, you definitely need to make a list like mine. I'm sure it'll prove that you have a lot more willpower than me!

The Temeraire series is great! My Dad is always asking me if the next book is not out yet, but as I wait for the paperback he needs to wait a bit longer.

I did a post like this last year and was totally shocked! And since then I have added more! I tell you...my reading is completely out of control!

Kucki68: Hi. Yes, I've heard really good things about the Temeraire series and am really going to try and read it in 2009.

Same here, Marg. It's frightening how much I want to read and am trying to find time for. But nice that there's so much great fiction out there.

I'm smiling about you and your series! Great idea to make the lists.

Wow! I'd been toying with the idea of listing mine, too, but now I'm having second thoughts! :-)

Very tempting! I am also looking forward to more Robin Hobb, L.M. Montegomery, and Anne McCaffrey books. Ai, I know that feeling: too many series to read in such busy times.

Hi Nan, yes I think my series are *well* out of hand and must be amusing to read about.

Yes, Darla, listing your series is a scary thing so beware!!

Hi Orchidus. I think part of the problem is that there are so many good series being written now. Far more than I ever remember in the past.

you are way overdue to post in this blog cath! lol

Later Pat, hopefully... I didn't realise it was almost a month! Well, I haven't been reading much I suppose. For one reason or another. *cough*

I won't tell you how long it took me to put even my preliminary list together, but I've done it - darn you for egging me on! :-) Now that it's spelled out in black and white, I think I might have to join a twelve step program or something to help me curb my series addiction.

Hi Darla! Will head over to your blog to see your list in a minute. It's a scary thing when it's down in black and white isn't it?

And I started a new series a couple of days ago - although it is actually on my list of series I plan to read. The book is Bitten by Kelley Armstrong... I think you read it too not so long ago and liked it.

Yeah, it was pretty astounding! I think that's why I put off doing it for so long. But it really is good to have it so I can keep track of things. I have been meaning to get to the second in the Kelley Armstrong series, before I forget what happened in the first one. I started a new one, too, on Ladytink's recommendation - the Jaz Parks series, which I'll add once I've posted my review. What a fun book! I'm totally hooked now, sigh. :-)