I've reached the stage where I'm now reading the same books as my eight year old grandaughter. I'm not sure if that means I'm going backwards or she's leaping forwards... or maybe we've met in the middle. Whatever. It was great fun talking with her about Larklight by Philip Reeve this afternoon and I love that we've reached this delightful point in our grandma/grandaughter relationship. She loved this YA book and I liked it rather a lot too. 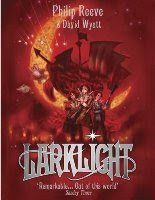 Twelve year old Arthur Mumby lives at Larklight with his older sister, Myrtle. They are Victorian children of the British Empire. Their mother is dead, their father is a mad scientist type and Larklight is no ordinary house; it floats in space, as a matter of fact, not far from the moon. When the house is invaded by huge spider creatures and their father captured and presumed dead, the children flee by way of an escape pod and end up on the moon. Here they run into all kinds of problems not least of which is being captured by a Potter moth and imprisoned in jars. Their rescue comes courtesy of Jack Havock, a teenage pirate, and his gang of weird and wonderful followers. He sweeps them away on his pirate vessel and they and up on Venus where Myrtle is captured by the spiders and whisked away to Mars. Although there's no love lost between Art and his sister, Art is desperate to rescue her and, oddly enough, so is Jack. Their quest takes them all over the solar system, into much swashbuckling danger, and Art eventually discovers the secret of his home, Larklight.

Philip Reeve has created a weird and wonderful alternate universe in this, the first of his Larklight trilogy. The setting is Victorian times but not as we know it. Space travel is possible and famous travellers of the age, such as Richard Burton, are space explorers not earthly ones. The moon, Mars, and Venus have all been colonised and the 'power' of the age is The British Empire.

This author also produced the Mortal Engine series for slightly older children, of which I've read two, and I wondered if there would be similarities. There are in the shape of um... not sure how to put this... the engineering, mechanical kind of feel to the books. In Mortal Engines, whole cities move around by way of amazing engines; in this series ships float through space by way of a 'chemical wedding'. It's all very imaginative and 'different' and I must say I like Philip Reeves's writing very much indeed, even if it's not really aimed at my age group! The style is very tongue-in-cheek; the two narrators, Art and Myrtle (by way of her diaries) are very Victorian in their speech and attitudes but there's a delightful dry wit on display. The book is beautifully illustrated by David Wyatt who, like Mr. Reeve, also lives here in Devon.

Two more books follow this, Starcross and Mothstorm and I'll definitely be reading those when I see them in the library. This is my 1st. book for Carl's Once Upon a Time III challenge and my 6th. book for J.Kaye's Support your local library challenge.
Posted by Cath at 23:03

I buy my grandmother books that I really liked during the course of the year so that she can read them, too. Mind you, I am not eight, so it is a bit different! My parents both don't read, so my grandmother is the only person I have to share it with. I really enjoy it. :)

Could I ask
How scary do you think ?

My (just) 8 loves the first two Sister's Grimm books and is in the middle of the third if that's any help...

I'm always on look out for good reads

that was a quick read! Glad you get to share with your granddaughter!! When "turning back the clock to be with grandkids" also includes getting rid of wrinkles and grey hair.. let me know! heh

I'm close to finishing my first read for quest the first also!! maybe today or tomorrow at the latest.

I love getting book recommendations from my 10-year-old daughter. I can't imagine how much fun it will be sharing books with my grandkids!

This sounds like something we could read over the summer and talk about. Thanks for the recommendation.

I think that intergenerational reading is nothing short of awesome :D This sounds like a book I'd really, really enjoy.

Kailana: It's so nice to have family members to share good books with isn't it? My eldest daughter's family are all bookaholics so we talk about books a lot when we're together.

Val: My grandaughter isn't too keen on things that are ultra-scary but she was fine with Larklight. I would say though that she is only a couple of months short of nine so is a bit older than your 'just eight' year old. I don't think her family know about The Sisters Grimm books so I'll pass that rec on. They too are always looking for suitable books for our grandaughter. It's not easy when children are reading above their age as the content is not always suitable.

Hi Pat! Yes, Larklight is a quick, easy read and a great deal of fun. I agree, being with your grandkids ought to mean shedding the grey hairs and wrinkles. Not fair!

Fuzzycricket: Yeah, it's so nice when kids start to rec books to older members of the family. It started several years ago when I was reading Beauty by Sheri Tepper and she spotted the book on the table. She then said I should read a story called The Sleeping Beauty because it was a lovely story and she thought I might like it. I'm guessing she was 5 or 6. Soooo sweet. :-) Anyway, Larklight is easily a book that could be read in instalments over a period of time. And there's enough action in it to appeal to both boys and girls. (And 55 year old grandmas.)

Nymeth: you're so right. I'm finding it a joyful thing chatting about books with my grandaughter as she's so full of enthusiasm. Her dad has to warn her sometimes not to give away the ending as she can get really carried away. I really hope she keeps her love of books.

I've read all three of these and loved them - and I don't even have a suitably ages child or grandchild as an excuse. I'm sure you'll enjoy the next two as well.

Age appropiate is tricky isn't it... Larklight sounds like a good read aloud, so is now on order at the library..Thank you

If she hasn't read it "Ronia, the Robber's Daughter" by Astrid Lindgren was a recent good find

Kerry: I don't think you need an excuse to read YA books. :-)

Val: my daughter wasn't able to find 'Ronia' in the library catalogue but has the first Sisters Grimm on order and said to thank you for the recommendation. In return she recs Percy Jackson by Rick Riordan, the Children of the Lamp series by P B Kerr and Susan Cooper's The Dark is Rising series. I know my grandaughter also hugely enjoyed the Horrid Henry books. Hope that's of some use.

That's lovely, we've read none of those So A BIG THANKYOU (and could you pass it on too!)

I think Ronia's quite moving and worth a search on interlibray loan if your library allows that?

Many Thanks Again Val

I've gotten this one from the library right now and am hoping to get to it soon. I want my son to read it at the same time as me, so I'm waiting for him to finish the books "his mom didn't pick for him!"

Val: my pleasure re: the various recs for children. I'll let you know if my daughter thinks of any others.

Yes, it was the inter-county website she checked for Ronia, but no sign of it. An unusual book perhaps. We'll keep it in mind and are bound to come across it somewhere.

Shelley: I really hope you and your son enjoy Larklight. Depending on how old he is, the same author has written the Mortal Engine series too... but those are more for over 13s I would say. Angie Sage's 'Septimus Heap' books are quite good for young teens too, the first one being 'Magyk'.

Anon: I'm keen to get hold of book two as well... need to check my county library catalogue and reserve it.

I adore this series! I'm glad you are having fun with your intergenerational read. I actually convinced a skeptical library patron to check this one out - the little boy's face just lit up when I told him about the potter moths, teehee. He's read them all now! Can't wait to hear what you think of the rest of the series. :-)

Darla: another series I need to get back to - 'so many series, so little time...' ;-) It must be so nice having a job where you get to encourage children to read.

It's my favorite part of the job, Cath - when they come back saying they loved the book and asking for something else, it just makes my day! :-)