As far as I know Runemarks, by Joanne Harris, is the author's only foray into the realms of Young Adult fantasy. I've only read one other book by her (her French 'food' type books not really appealing to me) and that was Gentlemen and Players, a psychological crime tale, which I absolutely loved and which made my top ten best reads of last year. I also love YA fantasy so when I saw Runemarks in the library I grabbed it quickly because even though some of her books don't appeal, Joanne Harris can certainly write.

The story concerns Maddy Smith, a fourteen year old girl living in a remote village where she is 'different'. She she has a runemark on her hand, what the villagers call a 'ruinmark', and to them that marks her as magical... someone to avoid or make fun of. Her only friend is One-Eye a nomadic old man from the Outlands, who she meets when she is seven and who reluctantly takes on her magical education during his infrequent visits to the area. It's during her fourteenth year that the goblins from Red Horse Hill are suddenly behaving much worse than normal. The village is becoming overrun with them and it's clear that something is going on. One-Eye sends Maddy on a mission, through the eye of the horse, and into the hill. Alone and having no idea where to go, she finds a goblin, Sugar and Sack, to guide her and they go on a quest to find the thing that One-Eye wants - The Whisperer. The Goblins are being led by a human, known as The Captain, and Sugar and Sack is very anxious not to be caught by him, helping Maddy. They are of course, and the rest of the story hangs on who The Captain actually is, what he has to do with One-Eye and why they both want The Whisperer. The adventure leads them through a subterranean underworld to find The Sleepers and from there Maddy goes on a journey like no other. Not only to the depths of Hel and Dream, but also to find out who she really is and why the future of the Nine worlds depends upon her.

It took me about a hundred pages to get into this story. With another author I might not have persevered but I felt this was worth the effort and so it proved. Truthfully, I'm not that great on stories about gods and know very little about the Norse gods featured here. I'm not sure why god stories don't appeal to me in fantasy books, perhaps it's the whole omnipotent thing, the fact that can behave as they like without having to face the consequences, whatever - it's not my thing. And that was a feature in this book too but somehow I didn't mind. They weren't all powerful here and I took a particular shine to Loki, the trickster, and Odin.

Also nice was Harris's use of a female main character and sticking with her to the bitter end. No replacing her with a boy with whom she has to Fall in Lurve (take note, Mr. Pullman) or giving her fainting fits or hysterics when the going gets rough; Maddy is tough and determined and I liked her a lot.

Complaints? None really. Maybe I would have liked more goblins... I'm still looking for the perfect evil goblin book, (although Clare B. Dunkle's 'Hollow Kingdom' series *is* perfect it's more of a 'romantic goblins' sort of series, not evil ones) so that search will continue.

It's possibly not a book that will go into my best reads of 2009 list. I liked it, enjoyed some of the ideas, and even found the Norse mythology pretty interesting. But it didn't set me alight as, for instance, Robin Hobb's books do. I may be mistaken but the ending indicated to me that Joanne Harris may plan to return to this world and actually, I hope she does, because I would definitely read more.

Oh and *MAP love*! Not one but three at the start of this book. This is the best one, the map of The Nine Worlds: 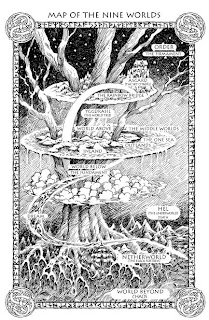 I have never even heard of this book by her before. It does not seem to get as much attention as some of her other books.

at least you finished the book.. that's more than I did.. it was one of the few i set down and did not pick up again... glad you at least liked it.. I can't even remember why i put it down anymore...

I'm actually a big fan of stories based on mythology, so maybe I'll make this my introduction to Joanne Harris.

And hey, no being mean to Mr. Pullman >:( I'm kidding, of course, and I see what you mean :P But I didn't think Will lessened Lyra's independence. I resented him for about a chapter in book two, but I quickly grew to love him too. Then again, I'm a total fangirl when it comes to those books :P

Kailana: yes, JH's other books certainly seem to get more attention than this one, which is a bit of a shame really as this one was really quite good.

Pat: it was touch and go about carrying on with the book until I got to page 124. For the life of me I can't remember why but something happened on that page that made me go, 'Oh!' and I then wanted to finish it. But it wasn't the easy YA read I was looking for after Bram Stoker! lol.

Nymeth: I would say this would be an excellent introduction to JH's superb writing.

I liked Will but couldn't stop resenting the fact that Pullman made Lyra decide that helping Will was *the* most important thing in her life now. (Regardless of the reasons.) I could almost hear a few verses of 'Stand By Your Man' playing in the background and didn't think that was a great message to be sending to girls in the 20th/21st century. I think we'll have to agree to differ on this one. :-)

You did review it. I came to visit you (I get like five minutes on the computer and then the kids are hounding me, we have to get the other one online!!!) and here is this lovely map and review. I may try to get this from our library too. Thanks for reviewing it, Cath, and I'm really interested in the mystery you mention!! I'll definitely be looking for that one.

Susan, yes... I personally would try to get Runemarks from the library if you can. It's a good solid read, and has a lot to recommend it but, for me anyway, it's not a reread.

I love the map! I haven't gotten around to this yet but will bear in mind it takes a little bit to get into. I love Pullman but I do agree with you, I much preferred Lyra acting on her own and The Subtle Knife was my least favourite of the three books.

Hi Rhinoa. It's been a week since I read Runemarks and during that week I've decided I liked it even more than I thought. Sometimes you need a little time to think about a book.