Once Upon a Time III

Absolutely thrilled and delighted to see that Carl has posted about this year's Once Upon a Time challenge. For several weeks now I've been thinking about which books to choose and even saving books up... the pile steadily growing and growing like Topsy. I even stopped myself reading fantasy books when I wanted to with the idea that come the challenge I would be so ready for a fantasy novel I would gobble up all the books in my pool! Heh. ;-) We'll see...

So, without further ado, The Once Upon a Time III challenge. 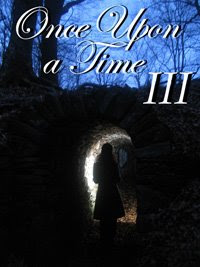 Such a beautiful and mysterious image.

The Quest I've decided to do is:

Read at least 5 books that fit somewhere within the Once Upon a Time III criteria. They might all be fantasy, or folklore, or fairy tales, or mythology…or your five books might be a combination from the four genres.

I've decided on a pool of books to read from but tend, very often, to go off on a tangent, so we'll see how it goes. I don't think it matters one way or other but I would like to read at least a few off this list:

As well as those I plan to take part in...

This quest involves the reading of one or more short stories that fit within at least one of the four genres during the course of the weekend. Ideally you would post about your short story readings on Sundays or Mondays, but this is not strictly necessary.

The books I've chosen to pick my stories from are:

And that's about it. The Once Upon a Time III challenge will run from now until the 20th. June and I hope everyone who's doing it has a lot of fun. I'll be starting soon but first I have to finish Blood Bound by Patricia Briggs.
Posted by Cath at 14:06

woohoo ! Here There be Dragons! YOu do realise that he has 2 more books out and a fourth should be out this year!?!.. so far they all are very enjoyable!

Hey Pat! Here Be Dragons is one that I will definitely be reading. Two more? Well that's okay, no problem, I think my daughter said the library has them because she's read them and I know she won't have bought them. Will keep an eye out for your post. So pleased you decided to give it a go.

I love your Emily Dickinson quote at the top of your blog. It fits in so well with this challenge as it references the journeys that books take us on.

Great to have you on board for this year's challenge! :)

Oh, I really should get the first book of the Hobb series, it's the only series by her I haven't read and I know I'll love it. Same for the Gregory Frost, I'm waiting to read book 2 - I really enjoyed book 1 - ooh, good list, Cath! and it's fun we share some books too! I love all the Charles de Lint on your list too, and just remember that Over Sea,Under Stone has been the least favourite of that series book, from everyone I've heard from since I read it last year. Dark is rising is much, much better. But you have to read Os,US to get to the others....This is so much fun, isn't it?

Great list, Cath! This is going to be so much fun. Looking forward to your reviews!

PS we have Wood Wife too in common...

The Stolen Child is on my list too! Happy reading!

That's a lot of good choices. I hope you enjoy them! Happy Reading!

You have a great list. The two stories in Jack of Kinrowan are excellent. I'm a big De Lint fan. My post is up here

I really enjoyed the Stolen Child, I hope you will too. Great list. I look forward to reading your reviews.

Truckers! Susan Cooper! The Wood Wife! Excellent list, Cath. I plan on reading Here, There Be Dragons too. Might be the very first, in fact.

I loved Larklight. It's such a cool, silly book. I really do recommend it for a fun, light read.

Over Sea, Under Stone is the start to a great series and I can't recommend Daughter of the Blood enough. A trying fantastic series.

I loved the Stolen Child.

forgot to mention that I read the Stolen Child and the Woodwife too. I liked woodwife... it's mostly into american indian folklore.

Carl: Thanks, I think that's one of the best book quotes ever to be honest.

Nice to be aboard and thank you for hosting this challenge once more.

Susan: I've been torn about the Liveship Traders series for a while. It sits between the Farseer and Tawny Man, as you know, but some people say it isn't necessary to read it, others that it adds a certain something to your enjoyment of the Tawny Man series. So, I'm going to read it first. No way can they be bad books if Robin Hobb has written them so I've nothing to lose as far as I can see.

Good to hear that the Gregory Frost is good, the review I saw made it sound so.

And thank you for your tip off about the Susan Cooper books. I'll definitely bear that in mind while reading. I like to know these things.

Robin: I'm even more excited about it this year, than last, for some weird reason.

Susan: Yes, The Wood Wife. So many people were reading it last year that I felt I was missing out. Then, later in the year, I found a copy in a charity shop... couldn't believe my luck. So now I can read it too! :-)

Stephanie: The Stolen Child is one book I really want to get to as I've been reading about it all over the place. Happy reading to you too!

Kailana: Thanks! I think there's not much doubt that I'll enjoy the books. :-)

R of MTB: I'm fairly new to Charles De Lint, just read two, The Little Country and Dreams Underfoot, both of which I loved. People say how good the 'Jack' books are, but I'm also keen to read much more in the Newford series, so this a really good nudge for me to do that.

Moo: I've had The Stolen Child for a while and not got around to it. I'm really hoping to get to it this time.

Nymeth: Delighted that you're reading Here, there be Dragons too. Can't wait to see what you think - I'm expecting to really enjoy it.

And yes... time to read Truckers methinks. Had to have some Pratchett in there somewhere. :-)

Kerry: I think I'm going to read Larklight first. Partly because it's a library book and will need to go back, but also it should be a fun start to my challenge before I get on to the more serious stuff. I've heard so much about The Black Jewels series that I sent for the book especially for this challenge. Happy Reading!

Jeane: yes, I think I'm going to like The Stolen Child too.

Maree: good luck with your list. It's not easy choosing but I've been thinking about this for weeks. lol.

Deslily: I know you were a bit 'so so' about The Stolen Child so we'll see what I think. The Wood Wife sounds very intriguing.