I honestly did not intend to start a new series. Relics by Pip Vaughan-Hughes was a random library grab, a book that I thought sounded like a lot of fun. But after I'd started it I checked the author out on FantasticFiction and found the book I was reading was in fact part one of his 'Brother Petroc' series. Typical. Even when I try not to start any new series, I end up doing just that... 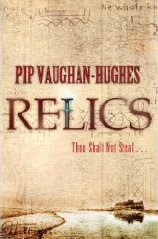 The year is 1235. Brother Petroc is a novice monk, a scholar studying in the city of Balecester. He hails from Dartmoor, his parents having given him to the monastry at Buckfast in Devon because he showed academic promise. Petroc's life is one of scholarly pursuit, heavy drinking and trying to avoid the sins of the flesh until, one night, he encounters Sir Hugh de Kervezey at an inn. Petroc immediately senses the man is trouble and is tragically proved right when, a few nights later, Sir Hugh tricks him into a taking a holy relic from the cathedral. Right in front of his eyes, Kervezey brutally murders a church offcial and promptly frames Petroc for the murder.

Petroc goes on the run, back to Buckfast Abbey, but he is not even safe there as Sir Hugh is there ahead of him, victimising Petroc's friend and mentor, Brother Adric, to get information about the young novice. Adric sends Petroc to Dartmouth to meet with a ship to take him out of the country. The journey is long and arduous, with Sir Hugh's men close on his heels, but he eventually meets up with the enigmatic Captain de Montalhac, a Frenchman and collector of relics. Petroc sets sail on the Cormaran and thus begins a series of adventures in countries such as Greenland, Ireland, France and Greece that will change the course of Petroc's young life.

Even though I didn't mean to start yet another series I'm actually quite glad that this book turned out to be the first part of one because I rather enjoyed it. I've always quite liked any historical book that took me on a trip around Europe, or out on the high seas, and this one covers both of those so it's a 'win, win' situation really. Pip Vaughan-Hughes writes in a bit of a swash-buckling style, the story is really a bit of a boys-own yarn with lots of chases and fighting and adventures galore. There's also some romance and misunderstandings therein... to be honest there's something for everyone and if you fancy a light, fun read you could do a lot worse than Relics. I certainly plan to grab book 2 from the library at some stage.

And having enjoyed this 'high-seas' story I'm now thinking of making a sea-faring list of books - pirates, sea voyages, fantasy, historical, anything really, so if anyone can think of any, feel free to leave a comment.

This was book 23 out of my 25 for the Support your local Library challenge which is being hosted by J.Kaye.
Posted by Cath at 10:32

Relics?? Relics?? So .. did you enjoy reading about me? lol

I think books and book blogs should be required to post in great big letters: CAUTION THIS IS PART OF A SERIES! LOL Actually, I really like series, but like you, I into way to many. That doesn't mean this won't go onto my list. You do make it sound good.

Caitlin: thanks for those suggestions. :-) I'd thought of Treasure Island but I've not read Kidnapped so didn't know what it was about. *Totally* forgot Hornblower. I haven't read the books but own the wonderful dvds and love them to bits.

LOL, Pat! Yeah, you need to stop getting yourself into my books! heheh.

Booklogged: I think I need to stop worrying that I'm reading a lot of different series. It doesn't matter, they're all fun books and that's what counts. And this one is certainly a fun book - I love stories that are set that far back in history.

Deslily is one special lady and can always make me laugh with her comments. :-D

I found Relics in the same way - looking in the library for something different to read and I did enjoy it.
Sadly I wasn't as keen on the second in the series -it just didn't seem to have the same pull as the first (or maybe it was the golden haired love interest - very irritating!) Doesn't mean you wont like it though.

minervamouse: funny how you can sometimes find a few gems when you indulge in random grabs in the library. Interesting what you say about book 2 in this series, I'll keep that in mind when I eventually get to it.