*Fanfare* At last I have read The Thirteenth Tale! It's been on my tbr mountain for a couple of years, I've had it on lists for at least three challenges, maybe more, but just not got to it. This year, encouraged by Deslily, I decided it was high time its tbr status was no more. So I added it to my pool of books for Carl's RIP IV challenge for which it is a perfect read. 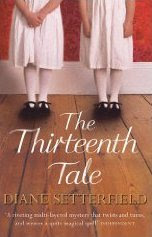 Margaret Lea is a young woman who is seriously into books. Her thing is Victorian literature, which is lucky as her father owns an antiquarian bookshop and she has helped him with his work since she was a young girl. Her mother has nothing to do with the shop and in fact has problems with depression. Margaret's relationship with her is strained and Margaret has no idea why until one day she discovers a secret about her birth.

Summoned, one day, to Yorkshire by famous author, Vida Winter, Margaret is confused as to why the author apparently wants her to write about her life when so many have tried before and been lied to by Vida. At first reluctant, Margaret decides to go and finds herself on the lonely Yorkshire moors, in a large country house that is hiding many secrets.

Miss Winter agrees to tell Margaret the truth about her life and thus begins a series of stories about the Angelfield family, specifically twins, Adeline and Emmeline, but also their mother, Isabel, and her brother, Charles, their housekeeper, the Missus, and gardener, John-the-dig. There is much to be told and huge secrets that Margaret wants to know more quickly than Miss Winter wishes to tell her. Margaret travels to the ruins of Angelfield House and senses ghosts from the past but also meets some very real people who are connected to the mystery somehow. Will she get to the bottom of it all before Miss Winter's very obvious illness reaches its ultimate conclusion?

To tell the truth this book is very difficult to explain. There are so many twists and turns that it's almost impossible to talk about it without giving away spoilers. I can say the atmosphere is quite gothic without giving anything away. There are nods to authors such as The Bronte sisters, especially books such as Jane Eyre and Wuthering Heights, Daphne du Maurier, Wilkie Collins and Henry James and I loved that as it kept me guessing about connections... usually sending me off in the wrong direction but what fun!

This is such a good book, it really is. It would appeal in particular to anyone who likes a good mystery or a ghost story but I'm certain it would also be enjoyed by anyone who just loves a darn good read. It's certainly made me fancy rereading books such as The Woman in White and Jane Eyre, and Rebecca needs to go onto the reading list for next year too. (I can't remember if I've read that book or not.) What better than a thoroughly good read that inspires you to go on to read other really good books?

I can't seem to discover whether Diane Setterfield is writing another book. There's no mention of it anywhere but I sincerely hope she is after the success of The Thirteenth Tale. This is a seriously good writer and it would be an awful shame if all we got from her was one book. Fingers crossed.

Ooh, I loved that one, and am so glad you upped it in the status of your pile. The twists and turns made it such a gripping read. I wonder if Setterfield will write anything else.

Yaaaaaaay! lol how I love this book! maybe it's because you couldn't guess all the connections until she came right out and said them! and when you guessed it was fun if you were wrong ! I'd have "inklings" but was always so surprised! Such a good read! I'm glad you enjoyed it !!

I loved this one too. So glad you got the chance to read it. I wish I had some time for a reread being October and all:)

I *still* haven't read this book! I won't get to it for this year's RIP, but I will read it - lol! I really like the cover you have pictured, too...haven't seen that one.

Verity: I thoroughly enjoyed all the twists and turns of this book. I'm not often taken by surprise by those but I was this time. I hope she does write more. The blurb in the back of my book says that she has taken up writing full time, so that sounds hopeful.

Pat: I did love the book and yes, part of the fun was trying to guess what the secrets were, even if you were proved wrong.

B Psmith, it took me a while to get around to it and now I wish I'd read it a bit sooner. Terrific read.

JoAnn: I assume it's the UK cover - I just picked it up in a charity shop so didn't get to choose. I really like the US version with the old books stacked up.

I HATE that cover. The one I have is so much cooler. What were they thinking! I am glad you loved it, though! I really need to reread it one of these days!

A few people have reccomended this novel, I am thinking I should give in to temptation and get this one. Enjoyed the review, you make it sound very appealing.

It IS an excellent book! It actually surpassed my expectations - I don't know if a part of my brain was trying to be contrary or what, but because of all the hype I didn't expect to like it quite as much :P And yes, you need to (re)read Rebecca!

Kailana: I think it must be the latest UK cover. I'm not struck either, though it seems to appeal to many. I prefer that US version with the old books stacked up. I might treat myself to that one at some stage and take the one I've got back to the charity shop.

Book pusher: glad you enjoyed reading about the book. It's well worth picking up or looking for at the library. A thoroughly good read.

Nymeth: so far I've just come across one person who didn't like it - a commenter on my Live Journal book blog. Like you she had huge expectations but unlike you they weren't fulfilled. She found the characters flat - which I must admit I did not. We're all different.

Yes, I will most certainly be (re)reading Rebecca fairly soon.

I found this book such a pleasant surprise. I haven't read much of its style before- gothic, a bit of mystery- and I enjoyed it so much! It was fun and really interesting.

I still have to read it - it's sitting right there on the shelf, waiting for a weekend I can lose myself in it. Preferrably a rainy dark weekend :-D I'm so glad you (and Ana and Pat and so many others!) liked it, I'm really encouraged that I will too! Lovely review, Cath.

This book has been floating around in my psyche as a potentially good read. I'll look it up!

Jeane: I completely agree with you. Sometimes these hyped books just don't live up to the publicity but this one did!

Susan: I'm pretty certain you'll enjoy it. And yes, you need a nice rainy weekend (like we have here today) to fully appreciate the atmosphere.

Sharry: I delayed reading it too - for years. I'm glad I got to it at last.

The whole victorian setting and the gothic feel have made me want to read this pretty desperately :).
Looking forward to the next stop at the bookstore

Vipula: this is a good, gripping story which is very well written. I hope you don't have any trouble finding it.

Great review. I have just read this one too and it grew on me. By the end I was totally engrossed!

Tracey: I'll go and read yur review in a moment but I completely agree with you that the story was engrossing. I loved all the connections to classic books.