I suddenly realised that the finishing date for the Non-Fiction Five challenge, being hosted by Trish's Reading Nook, was rapidly approaching and I still only had four books read. So I took a quick look at the pile and chose The Cruellest Journey by Kira Salak to read. 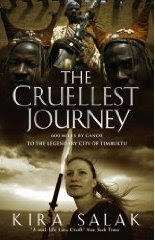 Kira Salak is an American woman who apparently likes to go on crazy journeys. Her friends and family all think she's mad and even she admits to being a little bit insane. This book sees her deciding to follow in the footsteps of Mungo Park who, in 1795, set out on the first of his two journeys to chart the course of the river Niger in West Africa. Her plan is to do the bit from Ségou to Timbuktu in Mali, a trip of about 600 miles, by kayak. She knows full well how dangerous this journey will be. She's a white woman travelling alone in a Muslim country where, if the truth be known, things haven't changed much since Park undertook his trip. Added to that she has a pathological fear of hippos, of which there are a great many on this river.

Interesting stuff this one. I love a good travel book and this was a good one *except* I did wonder at times whether she wasn't just a trifle foolhardy. As she travels up river the various tribes she encounters become less and less friendly. Men seem to make a beeline for her, either for money or other, rather more obvious, reasons. She sees young men sporting T shirts bearing the image of Osama Bin Laden and it dawns on her that this is not just for fun. I understand wanting a challenge but to willingly put yourself into so much danger seems strange. Towards the end of the journey she makes this observation:

I decide to ignore the man and paddle as hard as I can. He runs after me for a while but finally gives up. So much for my fifteen minutes of in-the-moment bliss. The fear is back, sitting like a bad meal in my gut. Every time the river curves, I look ahead for sight of men lying in wait for me in canoes, the river getting more and more narrow. I realise, but without surprise, that I've lived with constant fear on this trip. Fear of being chased, assaulted, robbed. Fear of bad weather and waves that might capsize my boat. Lots of fear. Fear of the wind, of harsh storms. Fear of hippos, crocodiles. Fear of being harassed by young men in passing boats, or of having my things stolen if I stop at villages. Endless fear.

I understand the fascination with parts of Africa that are still a mystery but to put up with the things she did for not much of a reason, and not to even get much enjoyment or satisfaction out of it - I find that questionable. She did redeem herself at the end with certain actions and I did find her stance on the treatment of women and slaves in Mali laudable. I learnt a fair bit and I must say that the writing was beautiful. It was an interesting book all told, and I own Travels in the Interior of Africa by Mungo Park and plan to read that at some stage because Salak's book has made me curious about it. Plus Salak has written another travel book: Four Corners: A Journey into the Heart of Papua New Guinea although, judging by one of the Amazon reviews, she was just as foolhardy on that trip too! I'll probably see if the library has that.

So, that was my fifth and final book for the Non-Fiction Five challenge. The books I read were:

I've enjoyed each and every one but if I had to choose a favourite it would be On Hitler's Mountain by Irmgard Hunt. Many thanks to Trish of Trish's Reading Nook for hosting the challenge and making me read some non-fiction!
Posted by Cath at 13:10

I think the only non fiction I read are autobiographies..and then sometimes you wonder if part of it isn't fiction lol..

Lovely and useful reviews.. Thanks!!!
I love Durrell
["Fillets of Plaice" is a nice collection when you just want to pick something up]
I've added "Trains and Buttered Toast,On Hitler's Mountain and
The Cruellest Journey " to my to read list's
[Just ordered the Betjeman from inter library loan aren't libraries wonderful!]
The Kira Salek book reminded me to reread my Dervla Murphy and Christina Dodwell "Travels with Fortune" was a fun read with a nice balance of adventure and fun (if I remember correctly) Oh gosh and now it's back to chores!

Makes me think of this book I read long ago called Paddle to the Amazon, about a father and son who paddled a canoe the length of the Amazon river, just to see if they could. Lots of dangerous encounters- and they were men! I can't imagine a woman doing such a thing alone.

Pat, yeah I do often wonder if there isn't a fair bit of embroidering going on with some no-fiction such as butobiographies and travel books.

Val: I've not come across Fillets of Plaice even though I have 8 Durrells plus his biography. I'll keep an eye out for that one.

The library is the best place to get the Betjeman book. It's interesting but not enough to buy, imo.

I've read a couple of Dervla Murphys and enjoyed them, but nothing by Christina Dodwell as yet. Will check the library.

Jeane: I like reading these books about people who do crazy things but there's always a little part of me that thinks they're a bit mad. What I hadn't realised was how dangerous a country Mali was for a white woman travelling alone and I'm not sure Kira Salak realised it before she started either. I tend to think with global communications most countries are in the 21st. century these days and was shocked to find it just isn't so.

I'll check out Paddle to the Amazon as it sounds interesting.

LOL! MAKE you read non-fiction? :) Well, congrats on finishing and I hope you'll join us again next year. I think the more non-fiction I read the easier it gets--hopefully it's the same for others.

This trips sounds too intense for me!

On Hitler's Mountain showed up in my mailbox a day or two ago. I look forward to reading it, hope it's in this lifetime!

Trish: I love reading non-fiction but tend to need something like a challenge to encourage me to read more. I loved doing this one and will definitely be joining you next year.

Booklogged: It is intense but also educational - and scary enough to be included in the RIP challenge!

I hope you enjoy On Hitler's Mountain when you get to it.

I really enjoyed reading this review..though I may not pick this book but I am more interested in the Travels in the Interior Districts of Africa by Mungo Park.

Vipula: I really think that the Mungo Park book is the one to look for. He has some amazing adventures apparently but it does sound like he was every bit as mad as Kira Salak.