I didn't have as much time to read this weekend as last, so only three stories for Carl's RIP IV short story weekend, this time. I chose the three from the two books in the photo below: 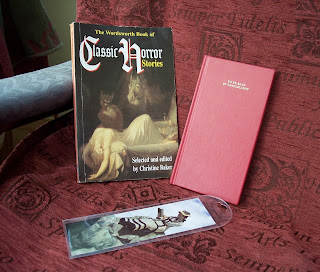 The little red book is entitled, To Be Read By Candlelight. It was given to me several years ago as a Christmas gift and it contains just two ghost stories by Edith Wharton - The Triumph of Night and The Eyes. A thoroughly lovely little gift, imo.

The story I chose to read was The Triumph of Night. This one begins at a railway station, in a snow storm, in the depths of New Hampshire. George Faxon has just arrived to take up a post as secretary come assistant to an elderly woman in one the local big houses. But it seems she has forgotten to arrange for him to be met and when a young man turns up to meet two other arrivals and offers him a lift and a bed for the night, Faxon gratefully accepts. He is thus transported to another big house. The young man is Frank Rainer, nephew and heir to the wealthy John Lavington, and ill with TB. Faxon is welcomed to the house but the uncle is cold and a bit strange... as is the atmosphere in the house. Mistaking it for the dining room, Faxon comes upon Frank, his uncle, and the two other visitors at a will signing and is asked to be a witness. But there is another man present that none of the others seem to notice. Why is he regarding the sick Frank Rainer with an expression of pure evil?

Nicely written this one. Good sense of place and atmosphere but maybe slightly lacking in the 'scary' department, and the twist rather predictable. But overall not at all bad - nothing by Edith Wharton could be really bad after all.

The other book is The Wordsworth book of Classic Horror Stories and, bearing in mind that I own quite a few thick volumes along the same lines, it seems odd that I should buy this slim little book. The reason was that it contained one of my favourite ghost stories ever and that is, Tarnhelm by Hugh Walpole. 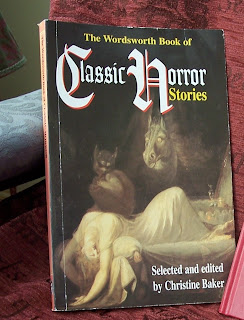 An eleven year old boy (I don't think we're ever told his name as it's written in the first person) whose parents are in India has to spend his school holidays in England with various relatives. None of them want him for Christmas so for the first time he is sent north to his two uncles, Robert and Constance, who live in Faildyke Hall in the Lake District. The area is bleak but beautiful and the young boy, bookish and a bit delicate, is immediately smitten. He makes friends with an adult employee, Bob Armstrong, and gets along fine with Uncle Constance, but Uncle Robert is another matter entirely. The man is quite frightening and lives alone in a building in the garden called The Tower. What goes on there is something that alarms the staff who never seem to stay very long. The boy is full of curiosity and is dying to see inside this building - until the day he is actually invited in...

I first read this story in a library book many years ago. I liked it so much I wanted to own a copy and spent many years searching for it until I found it in this little book. Back then I remember being completely creeped out by it; this time I was much more struck by the sense of place Walpole creates. I've been to the part of the Lake District where it's set and he has the scenery and atmosphere spot on. It's still one of my favourite supernatural stories ever, but now I appreciate the writing and the atmosphere as much as the story itself.

Aylmer Vance and the Vampire by A. and C. Askew, also in this volume of stories, is a traditional sort of vampire yarn. Vance and his assistant, Dexter, who investigate the supernatural, are visited by Paul Devenant, a man well known in society as a keen polo player, very fit and athletic. The two men are shocked to find him a shadow of his former self. It seems he has recently married Jessica, a woman whose family have a rather strange history, the men in particular who marry wives who die young. Davenant was recently persuaded by his wife to go and live in Blackwick Castle, in Scotland, her family's seat. And it is here that Paul's problems of ill health seem to have begun. Vance and Dexter travel north to investigate.

It will come as no surprise that this reminded me quite strongly of a Sherlock Holmes and Dr. Watson mystery. I've no idea who authors, A. and C. Askew, were; they're not mentioned in the introduction and I've not come across them before. But the story was well told, nicely written and nicely atmospheric in its setting. That I found it slightly ordinary is probably more to do with the amount of vampire yarns I've read. A better and more unusual story, imo, is Mrs. Amworth by E.F. Benson.

ETA: I googled 'Aylmer Vance' and found this short article on the ghost-seer and the authors, here. 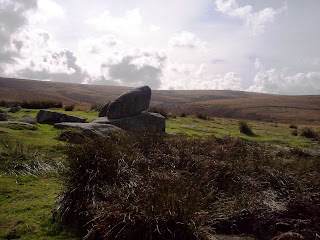 All three of these sound perfect. I'll be adding them to my list of stories to try to track down. I read Castle of Otranto by Walpole a few years ago and really enjoyed it. I am sure I've read an Edith Wharton short story is some collection over the years but I cannot recall with any degree of certainty. I love your To Be Read by Candelight book. That is a lovely gift, one that I would certainly have out as a piece of art in and of itself for my autumn decorations.

The cover for that other collection is great..very gothic and creepy. I'm so glad you were ale to dip into a few short stories this weekend. I ended up reading an entire book that was made up of short stories...I couldn't put it down. So far it has been two great Short Story Sundays in a row. I'm excited to see what next week holds.

To Be Read by Candlelight...love that title. I just ordered Wharton's ghost stories from Powells...complete with illustrations. So I will keep these stories in mind as well as look for the Walpole story. It sounds very good.

lol I love "to be read by candlelight" what a great title!

I am still hoping that i get to enjoy a short story or two from that used book I sent for Mammoth Book of Victorian and Edwardian Ghost Stories.. i am just not a short story person.. sigh..

I read a ghost story by Edith Wharton last year (or maybe the year before), which I found quite perplexing. I should go back and revisit it now! And you're right that nothing by EW could ever be bad! Love the bookmark by the way! :)

They have a list of Walpole fiction there too, but not Tarnhelm. I've never read The Castle of Otranto - I really should sometime.

I love the little red book, it just has style somehow.

Isn't that cover great? Apparently the painting is called The Nightmare and it's by Henry Fuseli.

I just ordered the two Chris Priestly books, Uncle Montague and Tales from the Black Ship. Plus there's a new one out in October. I forget the precise title but something to do with tunnels.

I have much more time next weekend and am thinking I might do railway ghost stories.

Book Psmith: An illustrated edition of Wharton's ghost stories sounds wonderful! I hope you'll take a photo or two. I think there is now a specific volume of Walpole's ghost stories available, which didn't exist when I was looking of course.

Pat, I just got my Mammoth book out to see what's in it. There's a lot! The Signalman by Dickens, The Judge's House by Bram Stoker, two by Edith Nesbitt (Phoenix and the Carpet fame), The Ash Tree by M.R. James is one of my favs, and there's even one by Sabine Baring-Gould from Laurie King's The Moor. I think you should be able to find something to enjoy in it.

Danielle: I've read a few of EW's ghost stories but so long ago I can't now remember them. Which is one of the reasons I'm now revisiting them.

I won the bookmark in a giveaway and thought it came from you? Perhaps not...

The Triumph of Night sounds like a very good choice. I didn't sign up for the short story challenge but I think I might join in, it is a great oportunity to re-discover the short story. I also love The Sherlock Holmes stories and I am sure I have seen a volume of ghost stories by Doyle.
Really like the idea of railway ghost stories.

Book pusher: as far as I know you don't have to sign up for the short story part of the RIP challenge. You just kind of 'do it' if you fancy. It's fun, so I hope you will.

Yes, there are volumes of supernatural stories by Conan Doyle. I have one called 'Tales of Unease' which is very good. But there are others I expect.

These all sound great fun, and I really want to read the Walpole story (I used to enjoy his books). I haven't been able to join in the Short Story Sundays so far, but I'm hoping to this weekend, even though I won't be home on Sunday.

Jodie: The Walpole is well worth searching out! Hope you find time to do the short story weekend this week - it's fun.