It's years since I read any Agatha Christie - I could even have been a teenager - so memories of it are a bit murky; what I do remember was that I liked her books but was never crazy about them as I was some authors. So here I am in my mid-fifties, gradually becoming a bit of a crime fan, reading other people's Christie reviews and wondering if I should try a few of her books. So I did. I nabbed Endless Night from the library because it sounded like an interesting plot and also rather spooky, so I thought it might make a reasonable read for Carl's RIP IV challenge.

Michael Rogers is a bit of drifter. He drifts in and out of jobs, in and out of relationships, in and out of countries. He's working as a chauffeur when he meets American, Fenella Goodman, known to all as 'Ellie'. Ellie, it turns out, is an heiress about to turn twenty one and thus coming into her fortune. They meet in a village somewhere on the coast in the south west of England, and both of them fall for a plot of land just outside the village. Not only that, they fall for each other and decide to marry. They do it in secret because Ellie's step-mother and friends back in America would be bound to object to her marrying a penniless man of a much lower class.

Throughout all of this there are various murmurings in the village. Ellie buys the land they wanted and her and Mike hire an architect friend of his to build them the house of their dreams. But it seems the land was once claimed by gypsies and one village woman in particular is full of dire warnings about what happens to people who try to live there. They don't live long basically... the land is cursed. Needless to say she is proved right. I'm not going into who dies or how because that would spoil the plot completely for anyone intending to read the book.

So what did I think of my first Agatha Christie in about forty years? Well, I think I ought to come clean and say that, personally, I prefer Christie's work dramatised on TV. I adore Poirot and Miss Marple (the Joan Hickson version) and watch them over and over when they're repeated. My opinion of her actual writing doesn't seem to have changed much. I like her books but I don't love them and I think it's because I don't feel involved with the characters and the writing; they're easy reads that I don't seem to connect with all that much.

All that said, Endless Night was not a bad read. It was written in the first person, which I like, and Christie got quite nicely inside the head of her main character, Mike. All through there was quite a sense of menace, of secrets untold, and a claustrophobic, spooky atmosphere. The ending genuinely surprised me. I had considered that possibility briefly but dismissed it as highly unlikely. Nice to be surprised like that. A good sense of place too, I'm not sure where exactly the village was intended to be but my guess is down on the south Devon coast, somewhere beyond Brixham where Agatha Christie did in fact have a home - Greenway. 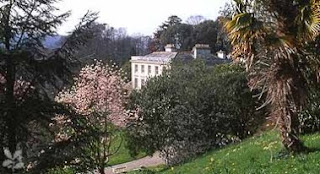 Will I read more Agatha Christie? Yes probably. Believe it or not I don't think I've ever read any of the Poirot or Miss Marple books so I feel I really should before settling on a concrete opinion of her work.

This book not only qualifies for Carl's RIP challenge, it also qualifies for the Support your Local Libray challenge being hosted by J.Kaye - book 19 of 25 in my case.
Posted by Cath at 10:41

i can't say i've read any of Christies books but like you I have seen many in movie versions.

As geeky as they were i used to also love watching Murder She Wrote lol.. oh well ..they were fun and lots of good guests too.

I'm sorry the writing didn't live up to your feelings about the television shows. I have yet to read any of Christie's work and really do want to give it a try.

Poirot is one of my favorite characters and I love the film length adaptations of her Poirot stories. I am also a fan of the newer Miss Marples because I like the actress so much for the show Mulberry.

Speaking of television mysteries, have you watched Foyle's War? If not I highly recommend them.

I read loads of AC as a teenager too and then started again about 2 years ago. They're easy reads and I enjoy them but I know what you mean about the TV dramatisations - particularly the Joan Hickson and David Suchet ones.

Did you see the Julia McKenzie version on Sunday? I thought it was OK. No one can match Joan Hickson, but Julia is better than, say Geraldine McEwan.

I wouldn't give up, Cath! I've read some great ones recently, and have joined the online AC challenge. It doesn't have any ending dates or requirements - more just a way of connecting with other AC readers. I'm going to do some 'bookkeeping' on my blog to put all the Christie reads on the sidebar under 'book reports' as an easy way of keeping track.

Hi Pat. I think my favourite Christie movie is Death on the Nile with Peter Ustinov and David Niven. But I also used to like Margaret Rutherford's Miss Marple.

Oh yes, we used to watch a lot of Murder She Wrote too. Harmless fun.

Carl, I'm absolutely amazed that you remember Mulberry! What a charming little comedy series that was.

Yep, *huge* Foyle's War fan here, Michael Kitchen is a god. LOL. I believe they are now going to do a series called Foyle's Peace. Hoping that might be on in the late autumn.

Margaret, I think possibly that certain excellent actors know how to bring out the best in Christie's writing.

No we didn't see the newest Miss Marple, it clashed with Stephen Fry exploring the Amazon.

Nan, when you've done your sidebar I'll check back to find some of the Christies you've enjoyed. No, I won't give up!

I read tons of Christie growing up! I stopped eventually because I thought I outgrew her - now I know better, that I got tired of her voice and had to take a break. From Nancy Drew to Agatha Christie - and then I was only mid-teens by then, and didn't want to read hard-boiled detective fiction, so I found fantasy instead. However, I have a few Christie's that are favourites: the Tommy and Tuppence series (N or M, By the Pricking of my Thumbs are both particularly creepy) especially, and I enjoyed Jane Marple and Hercule Poirot. I will have to reread some soon, I think!

Interesting that you like the tv version more. I find I don't; I prefer the book versions! No one has been perfect as Miss Marple for me, I think. David Suchet as Hercule is probably the best we'll ever get.

Now Foyle's War - that was an interesting series, and I enjoyed it, though i couldn't see the whole series - we didn't have a PVR at the time. I'm hoping they'll come back again.

Susan, I'll bear those Christie titles in mind when I'm choosing more to read in future. I think we all have our own mental images of characters in books. I didn't have any mental image of either Miss Marple or Poirot so was not disappointed with the TV versions. One character I really did love was Cadfael and, like you, was disappointed with the TV version. Derek Jacobi is a fine actor but he came nowhere near my idea of the wonderful Brother Cadfael.

Foyle's War is probably my favourite crime series ever. Michael Kitchen is an amazing actor and the whole series was of excellent quality. I hope you're able to see more of it. Maybe spot a good offer on the dvds.

Hmm..interesting point of view. I have been an Agatha Christie fan all my life and yes I do agree that the books are not something you get personally involved in. But I think some of the mysteries are brilliant. I think the quality of her work is highest when she creates H. Poirot and Miss Marple mysteries - the logic, the setting and the twists and turns are the best in those cases. I too stopped reading her books but I have been watching the David Suchet version of Poirot and it makes me want to go back and read more.

Vipula: I agree with you that Christie's actual mystery plots are excellent. I rarely know who did the murder. And David Suchet is such a brilliant Poirot, makes me wonder what AC would have thought of him.