For the last week I've been reading two books along side each other, so it's only fitting that they be reviewed together, especially as I enjoyed both equally.

First up, it's Uncle Montague's Tales of Terror by Chris Priestly. I saw this in the library some months ago but at the time was not in the mood for 'spooky' and promptly forgot all about it. It was only when I saw this post of Carl's at Stainless Steel Droppings that I was reminded of the book and decided to get hold of it to read for Carl's R.I.P. IV challenge. 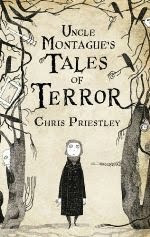 Edgar is a young boy who doesn't really gel that well with his mother and father. The only member of his family he feels any connection with is his Uncle Montague. He visits him regularly when he's not at school, having to endure a spooky walk through the woods in order to get to his uncle's even spookier house. Once there and settled in front of the fire with tea and biscuits, Uncle Montague regales the boy with tales of the macabre that always seem to be connected to some object in the room. A picture frame, a pair of binoculars, a wierd looking carved bench end and so forth. Slowly but surely Edgar begins to realise that there's some secret behind the tales that he can't quite grasp at...

Chris Priestley apparently wrote this book as a homage to ghost story writer, M.R. James ('Montague' was his christian name). It is in fact a book of short stories linked by a common theme, so short stories... but not exactly. Having read quite a lot of tales by M.R James I can say with all honesty that the 'homage' is a splendid one. Priestly has captured James's academic, ghostly writings perfectly and done what I would not have believed possible - turned them into a book for young adults. All the spookiness is there in spades but written in a very readable form. On the back cover of my copy is a small footnote, ' This is a seriously scary book - younger readers be warned!' And I would agree with that. My nine year old grandaughter could read this easily but I wouldn't give it to her for another three or four years as it's too frightening. Even I, sitting up in bed at midnight reading it, found myself looking around the room at times, and listening to noises after I'd turned out the light. Brilliant. And I don't say that lightly. And beautifully illustrated by David Roberts too. At the same time as I sent for this I also sent for Priestly's second book, Tales of Terror from the Black Ship and I'm finding it really, really hard to leave it alone and get on with other reading I need to do. If ever a book was calling to me...

Next up, Inspector Ghote's First Case by H.R.F. Keating. This was a random grab from the library; I was attracted by the idea of a crime book set in India. When I got home and checked FantasticFiction I discovered that the book I'd picked up was in fact book 25 in what is a very long series indeed.

Assistant Inspector Ghote of the Bombay police force and his wife, Protima, are expecting their first baby when a letter arrives informing him that he has been promted to Inspector. He is given a couple of weeks off before taking up his post but is all of a sudden summoned to the house of Sir Rustom Engineer, the first Indian after Independence to be made head of the police in India. Sir Rustom has received a letter from an old acquaintance, Robert Dawkins. It seems Dawkins' wife has committed suicide and he's desperate to find out why. He begs the help of Sir Rustom and Sir Rustom decides to send the newly promoted Inspector Ghote to Mahableshwar, in the foothills of the Himalayas, to investigate. Ghote discovers that Dawkins' house is called Primrose Cottage but there are no primroses, and the head manservant has far too many turbans than is strictly decent. And what does the gardener's boy know... and why has the local police inspector - a bully known to Ghote from police college days - closed the case so quickly? Things are not at all what they seem and Ghote has his work cut out in doing this favour for Sir Rustom.

The setting for this book is early sixties India and you get a real flavour of India at the time and the way in which Indians taking over from the British in key jobs were treated by Brits who decided to stay on. In a nutshell - not very well, by some of them at least. Keating's Inspector Ghote doesn't let this get to him though, he's a methodical man, if somewhat indecisive, destined by the sound of it to be a very good policeman. I found him charming and realistic, I could 'hear' his voice loud and clear throughout the book and loved his very human characteristics. It didn't matter at all that this was book 25 in the series, in a way I suspect this might be a good grounding to continue with the rest of the books, a sort of prequel if you like. Because, yes, I will continue with this series; I liked this book tremendously, it was charming and atmospheric and beautifully written and I can well see why H.R.F. Keating was a recipient of the CWA Diamond Dagger Award. Superb.

Inspector Ghote's First case is book 20 for my Support Your Local Library challenge which is being hosted by J. Kaye.
Posted by Cath at 15:06

I have just requested Tales of Terror from my library. I did not know that it was a homage to another writer...James is a new name for me. I also didn't know there was a second book. Can't wait to get my hands on it. Maybe I won't read this one right before bed:)

well you are rolling right along!.. love the cover of Uncle Montague's Tales lol... I am still struggling with Woman in White reading very little at a time but not ready to give up..Nymeth said it had a slow start.. i guess that's like getting the Ax for me lol I need to be captured right away..

Book Psmith: I hope you like Tales of Terror as much as I did and that it inspires you to try some M.R. James. He's not well known in The States but here whenever ghost stories are talked about M.R. James will not be far behind. Wonderfully atmospheric stories often based in Academia, churches or big old houses. Imo, he was 'the best'.

Pat: the artwork on the cover and inside this book is excellent, always love an illustrated book.

Are you getting along any better with The Woman in White? Sounds like an awful hard slog to me...

not really.. i am trying to have it draw me in and if i can make myself read more it may yet.. i just don't like to have to work at it, it should draw me right in and I want to like this book so not ready to give up yet.

Hi. Both me and Dylan(11) loved tales of Terror. Creepy was Dylan's word for it. He liked the Black Ship too although I haven't read that yet.

I didn't know it was written in homage t M.R James. I haven't read anything by him so I'm going to have to find some now.

Well, good luck with the book, Pat. Admire your perseverance. Hopefully, it'll be worth it.

Jo: could be my grandaughter could read it a bit sooner than 3 or 4 years then. I hope so as it's such a good book. Can't wait to get to the Black Ship and there's new one about tunnels out soon - next month I think.

And M.R. James is *so* worth reading... especially if you liked Uncle Montague.

Nice and intriguing reviews - I just two more writers on my list of authors I want to read books of :)

Chris Priestley looks really good! I wish my library has his books. I might see if they will buy them...

Vipula: they're two very good authors to add to your list. I highly recommend them both.

Kailana: I was really surprised at how *much* I loved the Chris Priestley book. I thought being a YA book it might be less creepy than adult supernatural books: it wasn't.

I have Tales of Terror from the Black Ship to read! And now you've made me think one day I might want to try reading Inspector Ghote :-) I'm glad you enjoyed both of them! I'll have to look for this Tales of Terror after I finish the one I have out...

Kailana: My library here in Ottawa has Tales of Terror from the Black Ship, that's where I got my copy from. DOes your library do inter-library loans? then you can request this (but not too soon so I can finish it!)!!

Susan, I have Tales of Terror from the Black Ship to read this month for RIP IV too. I honestly can't wait. I also have his new one about 'tunnels' on preorder. It's such a good series and he's a really good author.