Kailana at The Written World is holding a small unofficial challenge to read books about WW1 and WW2 during the month of November. This is something I usually try to do anyway - read one or two war books in the run up Armistice Day - so this is my first book for that, Not So Quiet by Helen Zenna Smith. 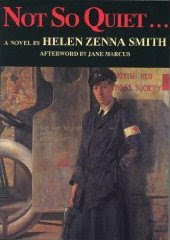 Helen Smith, 'Smithy', is an ambulance driver at the front during the Great War. She's a middle-class 'nice' girl, as are all the ambulance drivers, the powers that be deciding that only nice, middle-class girls are capable of this sort of work. She shares a billet with 'Tosh', the daughter of an earl, The B.F. (her initials but it means the other thing too), Eta Potato (called so because her name is 'Potter'), and Skinny, despised by Tosh for various reasons. The work they do, driving dead and injured men from the front to various field hospitals is indescribably dangerous and harrowing. They work until they drop, with hardly any sleep, atrocious food and flea ridden accomodation. Not only that, they have to put up with the cruel and vicious treatment from the camp commandant, known as The Bitch. It's her idea of fun to victimise any and all of the drivers for no reason whatsoever or for tiny infringements.

As the story moves along we also hear about Smithy's friends and family, both back at home and serving at the front. Her sister, Trix, is working in a field hospital kitchen and also being treated like dirt by the nursing sisters. Smithy's family are all proud that both their girls are 'doing their bit' for the war effort without having any clue what conditions are like in France. It's a serious bone of contention between them and Smithy knows only too well that much of what she's enduring is for her mother to look good amongst her friends and various committees. Giving up and going home is not an option unless you're injured and even then you're harried back to France in case the neighbours think you're shirking your responsibilities. Not being able to take any more is considered cowardice from those who have no idea what the soldiers and other serving personel are going through.

This book reads like a work of non-fiction when it is, in fact, fiction. However, the author, Evadne Price (pen-name for this book, Helen Zenna Smith), borrowed heavily from the war diaries of WW1 ambulance driver, Winifred Young, when asked to write a spoof on Erich Maria Remarque's All Quiet on the Western Front. Evadne refused to write a spoof on such a serious subject and wrote instead, a damning comment on the futility of war and of the people in charge. It's a powerful piece of work, harrowing to read and making you wonder why so many thousands of men and women in their twenties put up with the conditions and the carnage, sacrificing, if not their lives, then their physical or mental health. This book should be read by all as an excellent accompaniment to Remarque's superb book.
Posted by Cath at 15:21

Wow. I think I would find this book really fascinating. I always find the role of women in both WWI and II really interesting, and I haven't read nearly enough about it.

Oh, I want to read this! Off to see if my library has it!

Excellent review, Cath. I'll have to see if I can find this.

sorry kelly, this sort of book isn't on my list of likes..:o( But I do know you enjoy some reality books Cath, .. I'm just surprised at how much my reading has broadened...but no miracles today lol.. I'm as broad as I want to be!.. err I mean.. broader than I want to be! heh

kiirstin: I'm the same - interested in the role of women in the world wars but not really having read enough. This book is a really good one to increase your knowledge.

Kailana: I hope your library has it - it's not that well known for some reason.

Nymeth: it's a book that is well worth the search.

Hey Pat! We'll get you with the war books one day. Heheheheh. Seriously though, you read some fantastic books for RIP so it hardly matters that there're a few genres you don't care for. I have plenty!

Cath - this is literally at the top of my wishlist for when I start to buy books again. Thanks for drawing my attention to it,

verity: glad to help - it's a book which ought to be much more well known. It's a shame really.

I have this book! I just came across it the other day as I was looking for something else. I will have to keep in mind to read the Remarque book as well in conjunction. I'm reading The Night Watch by Sarah Waters at the moment and one of the characters also drives an ambulance in London during the Blitz--it has some harrowing scenes as well.

Danielle: the only problem with reading the two books together is that both are so harrowing that it's quite hard to take. With Not So Quiet I had to have frequent breaks and read something less upsetting or anger inducing.

Cath - I loved this book! An advertisement in the back cover of my Green VMC copy led me onto a another book which I thought you might enjoy - Enid Bagnold's Happy Foreigner which has similar themes. Have only just started it but liking it a lot so far.

verity: oddly enough I have The Happy Foreigner amongst my unread VMCs. Look forward to your thoughts and will try to get it out soon and read it.