What with painting decorating the hall, stairs and landing, and various other things going on, my reading has suffered this month. Twelve books last month - I'll be lucky to hit six this. Never mind, it's not about numbers and what I've been reading I've mostly enjoyed. My current read, A Gathering Light (known as A Northern Light in the USA) by Jennifer Donnelly, is worth taking time over anyway as it is *so* good; a sort of mix of Little House in the Big Woods, Anne of Greengables and A Tree Grows in Brooklyn, with added mystery. I love it. As I'm pushed for time I'll do quick reviews of the two books I've finished over the last couple of weeks.

First up, The Cruellest Month by Louise Penny. 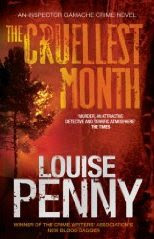 This is the third book in Louise Penny's 'Inspector Gamache' series. It's set, as are the others, in the fictional village of Three Pines which is in the forests of Southern Quebec.

Some of the inhabitants of the village are holding a seance in the local bistro. When nothing much happens someone suggests they hold one in the old Hadley house, on the hill, the scene of murders and traumatic events in previous books. During the second seance a woman dies of fright. Inspector Gamache and his team are called in and it's discovered that the woman had an abnormal amount of ephedra in her system, a herb used in the making of slimming pills. But she was not, and never had been, a slimmer. It seems she was murdered. Added to this investigation, Gamache still has troubles of his own involving his branch of the Canadian police, the Sureté. Several years ago he was closely involved in the bringing down of a rogue policeman and now that officer's friends are out to get Gamache. Someone in his own team is betraying him and he needs to find out who, while at the same time solve the mystery at Three Pines.

This book would have made a perfect read this year's RIP challenge. It was creepy and atmospheric and as good as many actual ghost stories. It's hard to overstate how much I enjoy this series. Louise Penny is such a good writer and has created a detective in Gamache who is likeable, worthy of respect, and clever. The setting too is just perfect. Three Pines, surrounded as it is by the northern forests, sounds like heaven and is inhabited by normal characters with flaws and idiosyncrasies just like the rest of us. Not all are likeable by any means, often acting in a selfish manner or doing things that are questionable. I've also enjoyed the background mystery of Gamache's problems at the Sureté. That was sort of solved in this book, but the reader gets the impression that the problem is actually far from over. Anyway, a superb read, and I already have the next book on my library pile, The Murder Stone.

What was nice is that I went from reading this book to A Gathering Light by Jennifer Donnelly and discovered that it is also set in the northern forests, but instead of the Canadian side, it is set on the New York state side. How odd it is when this happens!

My second book is The Snack Thief and it's by Italian writer, Andrea Camilleri. 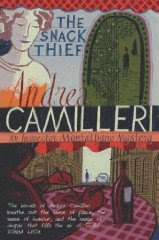 I'm cheating with this one and pinching the synopsis from the FantasticFiction site. I don't normally do this but it's several weeks since I read it (before Not so Quiet in fact) and the details have really blurred in my middle-aged brain.

In the third book in Andrea Camilleri's Inspector Montalbano series, the urbane and perceptive Sicilian detective exposes a viper's nest of government corruption and international intrigue in a compelling new case. When an elderly man is stabbed to death in an elevator and a crewman on an Italian fishing trawler is machine-gunned by a Tunisian patrol boat off Sicily's coast, only Montalbano suspects the link between the two incidents. His investigation leads to the beautiful Karima, an impoverished housecleaner and sometime prostitute, whose young son steals other schoolchildren's midmorning snacks. But Karima disappears, and the young snack thief's life-as well as Montalbano's-is on the line...

Yes, well, the whole thing got a bit confusing to be honest. What with disappearances, murders and the government intrigue... in end I couldn't remember who was doing what, to whom, and why... My fault, I think, for not paying proper attention. The big problem for me is that I really dislike Camilleri's detective, Inspector Montalbano. He's arrogant, sneaky, selfish, treats his girlfriend like a doormat and, in this book, is jealous of her relationship with the young boy whose mother has disappeared. I wanted to smack him quite frankly (the inspector not the boy).

I feel I've given this series a good go. Three books is not a bad innings and there are too many books I want to read for me to be wasting time on a series I don't really care for.

To be honest, I like the fact that I seem to be finding my niche where crime books are concerned. There are those that I can't seem to get into - the Maisie Dobbs books for instance, these Inspector Montalbano books, Agatha Raisin (not enough depth in the writing for my taste), and I don't think Agatha Christie is going to be my thing either. On the other hand I thoroughly enjoy Martin Edwards, Susan Hill, Barbara Vine, Louise Penny, Peter Lovesey, and a whole clutch of historical crime authors such as C.J Sansom, Laurie R. King, Ariana Franklin, Elizabeth Peters and Anne Perry. I'm not sure what the connection between these authors is but there must be one somewhere. Just something about them that hits the right note I suppose. Each to his (or her) own.
~~~oooOooo~~~
Posted by Cath at 14:44

in end I couldn't remember who was doing what, to whom, and why

he did it to her, in the dining room, with a knife because the knife was all he had.

your sentence reminded me of "Clue" lol lol

Hey, Pat! LOL. The *really* sad thing is I can't remember how she was killed and, for all I know, it might have been in the dining room with a knife... or even a rolling pin or the frying pan... Heheheheh.

When I first started the Camilleri book, I felt exactly the same and did not like them. However, I hate to be beaten by a book, which sounds silly, and I persevered and now I really love them. As the series progresses and the reader finds out more about him, you warm to him - well this one did anyway and now I am hooked!

May I suggest you try Donna Leon? Her books are set in Venice and her detective, Brunetti, is lovely and the books are full of depth and warmth.

And of course, my other two favourites, DL Sayers and Ngaio Marsh of the golden age of detection and I read and re-read these books constantly.

OK that is enough or else I will be here all day...

I love Louise Penny for a light mystery. I read The Brutal Telling and Still Life, but hope to get to the other 3 soon. Glad to see you enjoy her as well.

Elaine: thanks for your view on the Montalbano books... very interesting. I may well persevere with them then, from the library.

Nice to know I'm not the only one with Maisie Dobbs, I was beginning to feel rather lonely. My impression is that they may be more popular in the US than they are here.

I will certainly try Donna Leon, thanks for the rec. And Dorothy Sayers and Ngaio Marsh have been on my radar for a while now, I just haven't got to them.

Diane: Louise Penny is now one of my favourite crime writers, I'll be reading my 4th. Gamache book soon. If you like crime writers, see Elaine's comments above for recs. And I must recommend Martin Edwards' Lake District series too, starting with The Coffin Trail.

Not sure why I noticed this but it looks like English English has two Ls in Cruelest while American English only one.

I am looking forward to this one!

I am wondering have you read any Minnette Walters? I am reading one by her now, it is reminiscent of Vine/Rendell.

Hi Tara: Interesting observation about the Ls in words like 'cruellest'. Another one I noticed is 'traveller' (ours) and 'traveler' (yours). The Louise Penny books are Canadian so I'm assuming they follow English English in their spelling, whereas I would have thought they would have followed yours. It's something I've never given any thought to before...

No, I haven't read anything by Minnette Walters. I know of her of course and seen several very good dramatisations of her books on TV and an excellent documentary she did once about writing. I imagined her writing was similar to Barbara Vine's and will definitely get to her at some stage.

I'm pimping Martin Edwards to all and sundry at the moment. A bit reminiscent of Susan Hill to my mind.