It's half-term next week and my grandaughter is coming to stay so, in order to get my reviews up to date, I'm going to do two shortish ones of my two latest reads. First up, Daddy-Long-Legs by Jean Webster.

Jerusha 'Judy' Abbott is an older girl living in an orphange in New England at the beginning of the 20th. century. She would like to go college but knows the likelihood is nil until one day she's called into the office and given some news. Apparently, one of her essays was read to the trustees of the orphanage and caused much hilarity. Because of this one of the trustees has decided to sponsor her through college. The only stipulation is that she must write to him every month, telling him about her studies and life at the college but she can never know who he is and never expect an answer.

Judy proceeds to write, filling her pages with her delight at being at college, the friends she has made and various interesting observations and illustrations to go with her comments. She pours it all out, including her growing friendship with her room-mates, one of whom, Sallie, has a most beguiling family who take Judy to their hearts, the other being stand-offish with a family to match, apart from one uncle, Jervis Pendleton, who takes to visiting the girls regularly. Judy is taken with one of Sallie's brothers and hopes to spend the summer holidays with the family. Her trustee objects and she ends up staying on a farm instead, where a surprise visitor makes life extremely interesting...

What a delightful book. I read about it on Nymeth's blog recently and reserved it from the library. It's literally pure charm from start to finish. Judy is full of enthusiam and gratitude that her life is now changed out of all recognition and she reminds me of Anne Shirley to be honest. The similarity is quite marked. The author, Jean Webster, neice of Mark Twain I believe, was a reformer and amongst the charm there are strong hints of Judy's hard life at the orphanage and the differences between her and her very well-off room-mates at college. Yes, it is a very light, romantic type read, but it also has a point to make, and make it it does. I loved it to bits and have reserved its sequel, Dear Enemy, from the library.

Next, Eva Moves the Furniture by Margot Livesey. 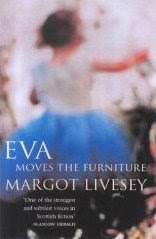 Eva McEwan lost her mother just after she was born and is being brought up by her father, David, and Aunt Lily in 1920s Scotland. Unbeknownst to anyone, Eva has two companions, both ghosts, a young girl and an older woman. She has no idea who they were when alive, but sometimes they act as her protectors and sometimes she has reason to question their motives.

Eventually, Eva is allowed to leave home and goes to train to be a nurse in a hospital in Glasgow. Thinking she must have left the companions far behind, Eva finds she's mistaken. Truthfully, she lives in fear that her secret will be discovered, especially when WW2 breaks out and she finds herself looking after very badly wounded soldiers. One of the surgeons, Samuel, begins to take Eva out and, eventually, Eva makes the mistake of telling him, the first person ever, about her companions...

I found the rec for this book on Alice Hoffman's FantasticFiction page. Often authors on that site will recommend other books and it's a good place to find book recs I find.

Anyway, Eva Moves the Furniture might sound like a ghost story but it's not. There are ghosts, yes, but the book is more about growing up, loneliness, loss, falling in love, the intense love of your children and so on. An ordinary life in other words but a fascinating one none-the-less. I found the section about nursing during WW2 to be particularly interesting - Eva works on the ward that reconstructs the faces of burned soldiers and it's both rivetting and harrowing. The last few chapters made me cry and not many books do that as I think I've said before. This is an intense book, but not written in a dramatic fashion... all is stated matter-of-factly so that shocking things are made even more shocking and often take the reader completely by surprise.

I've no idea why I'd never heard of Margaret Livesey before this. Her writing feels very similar to that of Alice Hoffman or Barbara Pym and is well worth reading if you don't necessarily need a happy ending all the time. I shall certainly be reading more if I can find it.
Posted by Cath at 13:09

oh boy.. well I had already put daddy longlegs on the wish list when Nymeth reviewed it.. your review just pushes it up the list a bit lol..

I actually finished my Patricia Wrede book! how long it took me has nothing to do with if it was good or not (it was good!) just seem to be lazy 'bout reading lately.. just picked up a sherlock holmes story written by Nicholas Meyer (6% Solution author and director of 2 trek movies) We'll see how this one goes lol

I'm so glad you enjoyed Daddy-Long-Legs! Judy reminded me of Anne Shirley as well. Dear Enemy is not quite as delightful, and the presence of eugenics makes it quite uncomfortable at times, but it's definitely an interesting book.

I do like the sound of Daddy-Long-Legs. Is it young adult literature?

Thanks for the intro to Daddy long legs ..It sounds a good read

Pat, I think you would absolutely love Daddy-Long-Legs.

Can't wait to hear about Meyer's Sherlock Holmes book - I had no idea he'd written one!

Nymeth: yeah, I read that the sequel is not at all the same, so I'll bear that in mind when I get to it. I'll go back and read your review of that one after I've read it.

Val: the book is a real comforting kind of read. I loved it.

He wrote 3.. one was turned into a movie "the Six % Solution"

How I loved Daddy-Long-Legs! I read this over and over as a girl. So glad you discovered this divine book.

Pat, think I'm going to have to investigate those...

Tara: I'm pleased I discovered Daddy-Long-Legs too and am sure I'll be reading it again at some stage. The library just informed me that its sequel, Dear Enemy, is now ready for me to collect.

I read Eva Moves the Furniture for a book club last year and thought it was interesting - I am not much for ghost stories but I agree that it really dealt more with growing up.

Both books sound delightful! I had never heard of Margot Livesey either, but am very intrigued { and of Daddy-Long Legs}. Thanks for your reviews.

Booksnyc: hello! It's nice to hear of someone else reading this book as it seems not many people have. I can't think why I'd never heard of the author before but will certainly read more.

Whitney: both books were delightful. In fact it seems like I'm having a good reading year as I've liked everything I've read really... so far anyway.