Well now, The Cater Street Hangman is a book I've been meaning to read for years but, like a lot of books, I've put it off and put it off. Two things have prompted me to pick it up at last - my reading of a couple of Anne Perry's Christmas books, which I've enjoyed very much, and the fact that I'm in a Victorian mystery sort of mood at present. Add to that, that Kay at My Random Acts of Reading made mention of this first book in the Charlotte and Thomas Pitt series, and it seemed like it was time to take the plunge. 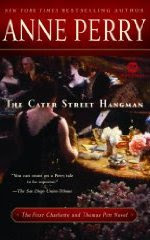 The Ellison family live quietly in London. The father, Edward, a banker, considers himself very much the head of the household and his word is law. He and his wife, Caroline, have three daughters - Sarah, the eldest, married to Dominic and still living at home, Charlotte, a spirited girl who says exactly what she thinks without thinking beforehand, and Emily, the youngest, an ambitious girl who wants more than anything to marry well and to marry money.

When the murders begin in their street the family at first try to stay aloof. Edward tries to keep the news from his wife and daughters on the basis that he doesn't want them tainted by it. But events overtake them - the family know one of the murdered girls and the police, who won't take no for an answer, arrive to ask questions - some of them embarrassing. Heading the police investigation is Inspector Thomas Pitt, a quiet but determined young man, who, it appears, has taken rather a shine to Charlotte.

The family are still attempting to stay aloof, treating the police with distain, and continuing with their daily routine as though nothing had happened, when one of their maids is found dead and mutilated in the street. If they thought things were bad before they are now horrified as Inspector Pitt begins turning up at all hours to question them minutely about their activities - especially the men. It seems Edward and Dominic both have secrets... but could they commit murder? Charlotte, in love with her sister's husband for years, is horrified and the only person who can help clear up the mess is the detested Inspector Pitt.

I expected this to be quite a light-weight book and in a way it was; it's very easy to read and I zoomed through it rather quickly. But dismissing it that easily would be doing Anne Perry an injustice because this is not just a crime/mystery story. The various layers of Victorian society are all here in this book. The class-ridden snobbishness the well-off used when dealing with anyone of a lower class, the double-standards of men, requiring their wives and daughters to be complete innocents while actively taking part in some rather dubious, extra-marital, sexual activity, women, completely frustrated at not being allowed to be full members of society, the hypocrisy of the church, and so on; it's all here.

To tell the truth I was really quite taken aback by some of it, even though I've read Victorian history and sort of knew. The father's censoring of the newspapers so that the women only heard the news he read out to them and had no idea what was going on in the world, angered me no end. And the appalling attitude of the middle-classes to the police. They were happy for them to investigate crime it seems, as long as they didn't have to have them in their houses. And woe betide any policeman who was overly familiar or even treated the middle-classes as equals!

More than anything though, I was sorry for the women. Intellectually frustrated, often trapped in loveless or dictatorial marriages, it must have been appalling. And that's just the middle-classes. Compared to the appalling conditions the working classes were expected to endure they had it very easy indeed! Such an interesting subject and I plan to read a lot of more of these Thomas Pitt novels (there are over twenty) because I bet you any money Anne Perry doesn't let up on her dissection of the diseased innards of Victorian society and I *really* want to read more.

This is my second book for the Year of the Historical challenge which is being hosted by Lurv a la Mode
Posted by Cath at 10:35

well you read that one rather quickly!! I can tell i won't get but 4 books read again this month.. I must be having a melt down! glad you liked this one so much!

Hey, Pat! Yeah I did read it quickly, couple of days in fact. But my current read is taking me a bit longer - just busy I think as it's not a bad crime book, set in Ireland. Hopefully will have some more free time this week.

Ah, Cath, you see why this book is one of my favorites. Anne Perry is very adept at disecting Victorian England. She does continue with many views of the hypocrisy rampant at the time. I love this series because the character grow and change over time. Her other series is set at an earlier time in Victoria's reign and stars Inspector Monk and Hester, a nurse who served in the Crimea. The Christmas books, while being mysteries, are much lighter I think.

I can see that I may have to revise my opinion of Anne Perry. I've only read The Christmas Visitor which I thought was rather tedious and not the most riveting of mysteries. I read it very quickly as it's very short - maybe I should have been more careful.

I read a bunch of the Charlotte and Thomas Pitt mysteries years ago, but I think I sort of O.D.'d on them so it's been a while since I picked any new ones up. That said I really enjoyed them and loved the insight into the Victorian world--it's sort of shocking how little the police were thought of really! I have the first William Monk book to read, which I've been looking forward to. I wonder if I pick up the next Pitt novel (wherever I left off) if it will make sense or if I'd have to go back and refresh the stories! I wish I had a blog at the time and had posted on them! Have you read The Suspicions of Mr Whicher (I can't remember now), if not, I think you'd like it as well!

..Oh and I love the new designs of the books. The covers are lovely and much nicer than my beat up mass market paperbacks. I'm almost tempted to start collecting the new ones, but...

Sounds wonderful! I love historical books and a good crime story just adds to it!

This sounds like another great book I will have to hunt out. The Victorians are fascinating just glad I don't have to be one.

Kay: oh yes... I can certainly see why you like these books so much. The crime part of it interesting but the social history content was even more so, imo. And am I right in thinking that the 'Grandmama' in it is the same person as the 'Grandmama' in one of the Christmas books? She went to stay with Caroline who must be the mother in this book. Things clearly move on...

Oh yes, I have the Inspector Monk books on my radar too and probably Anne Perry's WW1 series at some stage as well.

Margaret: it's quite hard to say because everyone's taste is so different but it might be worth trying one her longer novels just to see?

Danielle: LOL... I understand ODing on a series... I once read 20 Cadfael books in a row and never have been able to read the last 4 or 5.

I have the Monk books on my radar too, definitely plan to get to those as I've heard good things about the series from people I wouldn't have expected to like them.

Kay is the person to ask about whether you could pick the Pitt books up again easily. Yes, the cover is lovely isn't it? I really want to buy the next book because of its cover but am trying to restrict myself to the library copy when I can get it. Except that the only Devon copy is in Exeter and it would be so easy to just order it from Amazon...

I haven't read The Suspicions of Mr Whicher, but Deslily was kind enough to let me have her copy so I hope to get to that this year sometime.

Sheila: the nice thing about this book is that it's not just a crime book. The history gives it depth and there's even a smidgen of romance. It's an all round good read.

Book pusher: I agree, the Victorians were a fascinating lot, very much into knowing your place in society and the subsequent rules you had to abide by. To us it's sounds awful but I suppose it provided a very structured society and people knew where they were within its confines. But truthfully, I think I would have gone mad...

Cath, yes, Grandmama is the same character and isn't she a terrible old biddy? Anne Perry uses characters from her series in the Christmas books. I've only read a couple of those, but she kind of fleshes them out a bit there I think. I definitely think the Christmas ones are much lighter in tone. She doesn't take on the issues as much.

Kay: I'm so pleased it's the same Grandmama. I really liked her in The Christmas Guest (think that was the title) but gathered that she was a bit of an evil old biddy in some other book. I've only read a couple of the Christmas books too, but there are several more that sound very good that I plan to get from the library at some stage.

And I succumbed... I ordered the next three books from Amazon. *Looks sheepish*

OK, I'm going to have to read The Christmas Guest if Grandmama has any redeeming qualities (she doesn't improve in future books). And, it's OK to confess that you succumbed. We've all been there. I hope you enjoy them. The new covers are gorgeous aren't they?

Kay: I just checked and it is 'A Christmas Guest' (don't want you to go and get the wrong book). I'm not sure I would say 'redeeming qualiites'... except that she is determined to find out the truth of the crime, and that's laudable, imo. On the other hand... well, I'll let you read it to see. It's interesting - and there is some social comment too.

Kay: I forgot to say that 'yes' the new covers are really beautiful. Thank goodness I'm not the only one who succumbs from time to time.

I shall be adding this one to my reading list. I love historical fiction, especially if it's set in the Victorian era, and I love a good murder, so this sounds ideal for me. Thanks for the review!

Gina: I seem to be particularly fond of crime stories set in the Victorian period too. Luckily there are quite a lot to choose from!