I seem to have read more library books than anything else this year, and here's another one. Haunted Ground by Erin Hart was recommended to me by an American friend and as I'm *trying* not to buy so many books this year (which is quite laughable seeing as I just ordered three of Anne Perry's Inspector Pitt books from Amazon) I was really pleased to find it in the library. 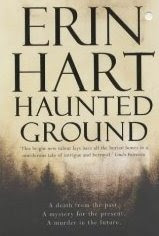 A farmer digs up a severed head in a peat bog in the west of Ireland. The experts are called in - archaeologist, Cormac Maguire, and American pathologist, Nora Gavin. These two had an older 'mentor' type friend in common who is now dead, the friend having been keen that they get together romantically. They never did so there is some slight awkwardness and history existing between the two.

As they arrive from Dublin to see the head, a local land-owner, Hugh Osborne, also arrives. His wife and son went missing several years ago and he's anxious to see if the head might be that of his wife, who was of Indian origin. It's not. It's a red-headed girl and no one has any idea how long her head has been buried in the bog.

Hugh Osborne asks Cormac to excavate a site on his land where he plans to build. Nora is intrigued by both the newly discovered head and the disappearance of Mina and Christopher Osborne, as she herself has lost a sister in suspicious circumstances. So she asks Cormac if she can help him so that they can covertly investigate the disappearances and also try to find out more about the red-headed girl. They stay at Hugh's manor house and meet his cousin, Lucy, and her son Jeremy. They also get to know the family of the farmer who found the head, the McGanns. All of them clearly have secrets they're not keen to share. Nora and Cormac set about investigating not only the mystery of Hugh's wife and child but also delve into local history to find clues to who the red-headed girl might be.

Erin Hart apparently lives in Minnesota but has an Irish husband, I believe, so that explains why the book set in Ireland. It's very apparent that she spends time in that country as the both the setting and atmosphere are very well done. Sadly, I've never been to Ireland - I've always wanted to go - so can't really say how accurate it is, only that it felt spot-on from what I've seen of the west of Ireland on TV. Put it this way, various descriptions made me want to pack my bags right now...

The mystery aspect of the book was very good too. I liked the way the author tied in the stories of the missing persons with that of the red-headed girl, anyone interested in Irish history would enjoy this I would imagine and I felt like I learned a lot. I didn't guess whodunnit or how the crime was committed - the how and the why was actually more important than anything in the end. Not that that matters too much to me as I can sometimes guess whodunnit right at the start of a book and it makes no difference to my enjoyment. Archaeology-wise I'm no expert and can't vouch for the accuracy of any of the methods used. An expert might be thoroughly annoyed by mistakes for all I know, or it could be spot-on.

All in all not a bad read. A good setting, a good mystery, good historically. It *possibly* would not have harmed had the story been a little more pacey but that's a minor quibble. I'll certainly grab more books by Erin Hart if I see them at the library and, in fact, I think there *are* a couple more books with these characters. And I seriously need to go to Ireland! 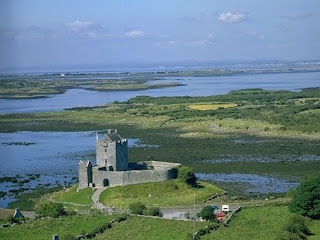 Dunguaire Castle near Kinvara, Co. Galway.
Photo from Galway.net
Posted by Cath at 13:37

Cath, this one sounds very nice and happily, it is the first of the series. From what I can see, it was a finalist for an Agatha award and an Anthony award for Best First Novel in 2003. I'll be looking for this one at my library. My husband has been to Ireland and said it was lovely.

this sounds pretty good.. but I am REALLY TRYING (not always successful) to not buy any books that aren't added to series I am reading. ( and no the "almost astronauts was not a series but there are exceptions to the rule!.. way too many exceptions unfortunately!)

I quite like the sound of this! It sounds like it'd satisfy my recent craving for mysteries nicely, and the historical aspect really appeals to me too.

I read this too and liked it well enough that I would read more of the author's work. But guess what? I work with the author's cousin! Isn't that funny!

Kay: I didn't realise it was nominated for those awards, that's very interesting. How lovely that your husband has been to Ireland. I have no excuse really as we could fly from nearby Exeter airport, to Dublin, and it would probably only take an hour or so. I really must one day.

Pat: I haven't been that successful in not buying new books either. Well, I have a bit, but if I really want something then I make an exception... or three.

Nymeth: yes the historical aspect of this book really does increase its appeal, imo. It made me understand what the English did in Ireland a little better. Always a good thing.

Tara: what a strange coincidence! It's such a small world.

I'm glad you liked this! from what I recall her second book was even better. I'm really looking forward to the new one. And I have been using the library lots lately, too!

I read this one! I really liked it, so much that I bought a copy for my mother and lent it to my friends to read. The murder - the one of the child - still haunts me though, it was disturbing, but then anything involving kids bothers me these days. I haven't found her second one yet which I do want to read. And, I just discovered some of my ancestors came from Ireland, so know I really want to go!!

Oh and you really need to win the lottery .. not only for the conventions WE will attend but once I am over there WE need to see Ireland together!! lol. oh.. and P can come too, ya know, just because .. lol

Danielle: interesting to hear that you thought the second book was even better. Must check to see if the library has that. The trouble with reading so many library books is that my tbr pile is not decreasing very much!

Susan: I have a similar tendancy to be disturbed by anything which involves the murder of young children. I think it's because we have kids and grandkids - though it doesn't seem to affect everyone. Odd.

Pat: I don't think we can take P to Ireland as he might develop too much of a liking for the Guinness. LOL. On the other hand we could just leave him in the pub and go off exploring. hehehh

Yes, I have that same problem and am borrowing and reading lots of library books lately, too. If only I wasn't also buying it might be okay....

Danielle: I have such a huge tbr pile that I really don't need to be borrowing so many from the library. Luckily, it's a free 'fix' but, although I have cut right back on the amount of books I'm buying, I haven't stopped entirely either.