I reserved Extremely Loud & Incredibly Close by Jonathan Safran Foer after reading about it here on Stuck in a Book's blog. His housemate was the one who read it, not him, and I was so taken by the description that I reserved it from the library. 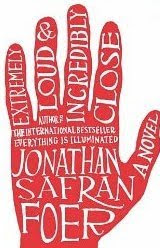 All that said, I've no idea where to start because if you fancy a read that is different, this is it.

Oskar Schell is a nine year old who is interested in everything. Primarily he's an inventor but that doesn't stop him being into natural history, making jewellry, astronomy, playing the tamborine and so on. He lives with his mother and 'Ron', his mother's new partner. It quickly becomes apparent that Oskar is grieving and we soon learn that his beloved father was killed in the 9/11 attacks two years previously.

While rooting around in his father's closet - which has never been cleared - Oskar finds a blue vase and accidently drops it on the floor, shattering it. Inside he finds an envelope marked 'Black' and inside that, a key. Investigating further he finds that the lock it belongs to is not in their appartment. Oskar decides that the key must have been of some importance to his father and assumes that 'Black' must refer to someone of that name. Thus he sets about tracing every person named Black in the entire New York phonebook.

Along the way we learn that the member of the family closest to Oskar now, is his grandmother and, paralelling Oskar's search, we hear her story of her early years in Germany and the bombing of Dresden. Her husband left her when she was pregnant with Oskar's father. He could no longer speak and when she fell pregnant was unable to bear the thought that he might one day lose his child.

Oskar's search for peace of mind and possibly even to discover how his father died in the attack - there was no body - leads him through the five boroughs of New York (one lovely story Oskar's father told him was about the possibility that there were once six) and to touch the lives of many strangers.

Goodness, what an amazing book. Some of the details are so touching or downright tragic that I was moved to tears. And yet it's not a sad book really. Oskar is such a wonderful character, intelligent, earnest, compassionate and so full of hope, as children are, that you can't help but root for him in his quest for answers. I have to say I did wonder if the author had endowed Oskar with more intelligence than his years would suggest. And would a nine year old really be allowed to wander New York in that manner? It doesn't really matter, I'm good at suspending disbelief and the story itself makes you forget any lingering doubts you might have about reality.

The writing style is weird. The book is illustrated with photos of whatever might be being discussed on the page and in places there are pages with just one sentence or where the writing is so dense you can't read it. All this adds to the experience of reading something very unusual and reminded me slightly of The Curious Incident of the Dog in the Night-time. Although, to the best of my knowledge Oskar is not supposed to be autistic as the young boy in that book is. Some might find themselves irritated by the style. My husband asked me what on earth I was reading and shook his head when I tried to describe it. It's not a book he would have the patience to read because patience is required. This is not a pacey, 'bare bones' sort of a book.

I liked the additional historical detail. Though perhaps 'liked' is not the correct word to use - the description of the bombing of Dresden in WW2 shocked me to the core. Ditto a testimony from a woman who suvived the bombing of Hiroshima and was searching for her daughter. Oskar's retelling of things he had read about 9/11 were also gruelling. I've read very little about it to be honest, feeling that I have sufficient imagination to imagine the horror of dying like that, without needing to read about it. It did me no harm though and probably did me a lot of good - one can be a bit cosy in one's life sometimes.

All in all this is not a book for everyone. 'Pretentious' is a word I've seen used to describe it (I don't agree). Sadness and tragedy abound and reading how a nine year old child comes to terms with a terrible loss is maybe not everyone's idea of entertaining reading. But I'm so glad I read it and if you can steel yourself it's well worth the effort.

This sounds like an amazing book, putting aside the small discrepencies that may occur, such as why someone so young would be left to their own devices in such a way.

I have never read a book which is set out in the format you describe, and I think that, that in itself would be quite a challenge.

I also think that it would be something I would want to read as a 'one off' experience and I wouldn't want to read any 'look alikes', which may be written by other authors in the future. The format would probably only work for me the first time.

I have definitely added this to my wish list already, but I really need to know, if he ever finds out what the key unlocks and are we to suppose by the end of the book, that the child is slightly autistic ... or are these things never revealed?

This is a book I have meant to read for years, but still haven't accomplished. It does look interesting and a bit of a challenge, but I think it would be worth it.

I refuse to add another book to my list today lol..geez.. it does sound like you enjoyed this one and that's great!!

I am reading one that i can't put down! (love that) and it's a small book only about 260 pgs so I will be thru this in nothing flat..! I have a bunch of monster books waiting though lol..its not going to be a good "numbers" year lol

So glad you enjoyed it - and thanks for the review. I think I am with Peter, though - not enough patience, which could be my loss.

Hi Yvonne: Yes, I think this book is probably a one off for me. I don't tend to read books of this intensity all the time, it would finish me off pronto, but now and then I feel it does me a lot of good. Yes, Oskar does find out what the key was for. We don't find out that he's autistic, I think he's just very different and that's underlined by mild bullying at school etc. He's obviously very clever and people who are not can feel threatened by that. Many issues to consider in this book.

Kailana: It's very much worth it I can assure you.

Hi Pat: Not sure if enjoyed is the right word. lol. Fascinated and intrigued by is, I think, more accurate. I'm still thinking about it a couple of days after I finished so it's had quite an impact.

Sue: Well, it's like I said, the book is not for everyone. Peter is much more picky than me and thinks I read very weird books at times. I would think you would have more success at reading it than him. *g*

argh. I find when they stay on your mind that long it makes it hard to begin another book! I finished Crooked letter, Crooked letter (review tomorrow) and began Simon Louvish's biography on WC Fields! (another chunky book)

Pat: You're right that it can be hard to decide on the next book after an intense read and that happens to me often. It was okay this time though, I started a sci fi book I knew I would like, my last for Carl's sci fi experience. Off to read your latest review.

I haven't read anything by Franzen yet. I'm afraid I'm lumping him with those popular authors whom no one reads after 5 years.....bad of me, I know. Reverse pretentious reader! lol I might try this one, though if I couldn't get through House of Leaves (which so many people loved and I loathed the footnotes so I couldn't bother) I'm not sure I'll get through this one, but its' on my radar now, thanks to you. And I'll probably try The Corrections when it comes out in softcover. Sometimes writers can wear you down by being good, too! lol

I think you have the wrong author, Susan. This is Jonathan Safran Foer not Jonathan Franzen. Tell the truth I've not actually heard of Franzen. LOL.

This was a book I picked up last year on a whim. Saw in on a book table and the description made me want to take it right home to read, which I promptly did. Loved it. It was an experiment for me as well because I hadn't read the author's work previously. You are correct in disagreeing with the "pretentious" label. It is not that at all. It is a moving, sometimes whimsical, strange and fascinating book. I went through a roller coaster of emotions reading it. Definitely a book worth reading. I'm so glad that you enjoyed it.

Carl: The book was chosen as one of someone's top 5 books in our recent new book programme, My Life in Books. I forget who it was now but I cheered when saw it and this person had clearly been knocked out by it. It's that kind of read really, I wouldn't anyone would fail to be moved.