A Room Full of Bones

Well, I've just previewed this post before posting and all the paragraph breaks have disappeared. This was a problem with the new interface before, I seem to recall. I'm going to post and see if it alters but I imagine it won't and have no clue what to do about it. *Sigh* Why the hell can't these internet people just leave things alone?

ETA: Solved... you have to go to 'options' the first time you do a new post, scroll down to 'line breaks' and choose 'press enter for line breaks. The new interface has set it on a 'use br tag' default for some crazy reason. *Fumes silently*

ANYWAY. Still reading for Carl's R.I.P. VII, and still thoroughly enjoying the books I'm reading for it. Book four is A Room Full of Bones by Elly Griffiths, book four in her 'Ruth Galloway' series. 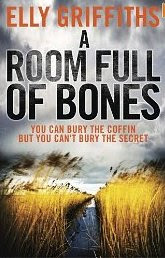 It's Halloween and Ruth has an appointment at the Smith Museum in King's Lynn in Norfolk. She's there to supervise the opening of a coffin which has been found on a building site. The coffin is marked and thus they know it contains the remains of one Bishop Augustine who lived back in the 14th. century. Arriving early, Ruth finds the small museum silent and empty. She takes a look around the museum and then heads for the room where the coffin is to be opened. There on the floor, apparently dead, is the museum curator, Neil Topham.

DI Harry Nelson is called in to investigate the murder. An awkward situation given he is the father of Ruth's daughter, Kate, but already married with two teenage daughters.

It seems the museum curator has been receiving threatening letters, connected with some bones held in the museum archives. These bones, Australian Aboriginal in origin, had been brought back from Australia by one of the current owner's, Lord Smith's, ancestors in the 19th. century. Needless to say, the modern day descendants want the remains back. Coincidently, Ruth has a new neighbour, Brian Woonunga, and he, with a name like that, is of course an Australian Aborigine. There has to be a connection and of course, when weirdness begins, Ruth's druid friend, Cathbad, is automatically on the scene.

The current Lord Smith runs a racing stables and clearly this is the first place to look for the truth. Nelson finds the family a difficult one, with many awkward and complicated relationships. Things are not right here, he can feel it, and the feeling is confirmed when he discovers that Lord Smith has also been receiving threatening letters. What on earth is going on? Dead snakes turning up people's doorsteps? Ritualistic dancing in the woods around the stables? And then someone else is killed in very odd circumstances. Ruth comes to realise her friends might be involved and needs to decide where exactly her loyalties lie.

Another page turner from Elly Griffiths. Great plot, full of weirdness. I love the way the author injects just a smidgeon of new age magic into these books, leaving the reader wondering if it's real or whether there's a logical explanation for Cathbad the druid's cermonies and machinations. I love this odd character the author's created, and he has an important part to play in this particular plot.

I also love Ruth Galloway of course. Her life is difficult and there's a substantial amount of hurt for her at the moment. I felt so sorry for her in regard to one particular thing that's going on, to do with Nelson, and it lessened my respect for him I have to admit. It was sort of solved at the end, but was it? The last sentence indicated that it might not be. I felt very ambivilent about the whole situation, knowing I 'should' feel one way and feeling quite guilty that I didn't. I wonder if I'm alone in this...

This relationship stuff is part of what's keeping me reading this series... plus of course they really are cracking good reads that gallop along at a very swift pace. I also adore the Norfolk setting and especially where Ruth's home is situated on the saltmarsh. Fabulous spot I would imagine. The next book is due out in March 2013 I gather. Can't wait.

Cath, I know just what you mean about the whole book. Loved it and can't wait for a new one. March, huh? I'll be waiting. :-)

well it sounds like you've eaten up another enjoyable book! I am glad you are on a roll!
lately not many are fulfilling my reading enjoyment..the last one did but after setting 3 books aside I think I will reread Drood. Just so I already know I will enjoy it!

woohoo!!! glad you figured that out! but everytime they "fix something that ain't broke" they make it harder to work in it.!

This was such fun, wasn't it! I must make a note to order the next one from the library as soon as I can.

Having read your comments I am dreading going near my blog in case it all goes wrong :-(

I've read this but as I haven't written about it yet, I haven't read all your post - just the last paragraph really. I enjoyed it too!

Pat: It's a shame you don't seem to be finding many good books to read for RIP this year. Seems like a good plan to me, to reread something you know you'll love. How about rereading The 13th. Tale too?

Too right about not fixing stuff that isn't broken. You mentioned a 'customising' button in a Facebook comment... I can't even *find* that! I did, however, find my profile page at long last. *Bangs head repeatedly on desk* (Might knock some sense into me...)

I know the feeling! Nothing is where it should be. If you have the 'line break' problem like me it's easily fixable on the 'options' drop down box though.

Margaret: It's so nice to have a few reliable series that you know you'll enjoy. Ruth Galloway is one of mine.

I might! lol but I thought this choice a "either or" and I've read the 13th tale 3 times and Drood only once ..I am about 80 pgs into Droods neal 800 pgs! sheesh lol

Pat: Enjoying it as much as before? Inspired by you I kind of think I would like to reread The Historian as I liked it so much. Not sure whether to do that for RIP or not.

I have got to start reading this series!

Gavin: It's a very good series and well worth trying.

absolutely enjoying it the second time!!! you really need to read it !

Oh Cath, I loved this book so much too. I wondered what was going to happen with Nelson and Ruth, and Michele. I found I didn't lose respect for him, I did for Ruth for a bit when she didn't go even though Michele asked her to. That is where Ruth has a problem, I suspect. Though it is made all right at the end, sort of. And still hanging! lol Maybe both Ruth and Nelson are working out how they feel, really. I find this is part of why I love the series, as much as all the supporting cast (Cathbad!) and of course, the mysteries are quite good. I love where she lives too. I really want to go visit Norfolk now because of these books!

Pat: I'm so pleased. Yeah, I know I need to give the book a go... Christmas reading maybe?

Susan: I think the reason Nelson went down in my estimation was because he capitulated to Michele's demand that he should not see his daughter. I understand why he did it, and that he didn't want to, but to abandon a baby daughter completely like that when none of this is her fault? Very questionable. He actually said it himself to Ruth... that he had messed everybody's lives up. But then that's why I love these books... life isn't easy, horrible decisions have to made and Elly Griffiths doesn't shy away from this. And, yes, you're so right about Ruth... she should have gone when Michele asked. I understand why she didn't, but she was wrong, imo. Mistakes on both sides. And probably the big surprise for me was finding out how much Michele loves Nelson. That shifted the goalposts a *lot* for me, though I still don't like her. Now I'm really torn. Don't you just *love* books like this???? LOL.

Norfolk is very pretty and coastline is absolutely stunning.

Shame we have to wait until March forthe new one - not that I haven't got quite enough to be going on with but still....

Know what you mean about Nelson but I can't blame Ruth who has got to be one of my favourite fictional characters.
For some reason Nelson always reminds me of Franny Bliss, the police inspector in Phil Rickman's Merrily Watkins novels.

LizF: I find myself unable to blame Ruth too. She's just doing the best she can under difficult circumstances. Trying not to expect too much of Nelson but unable not to feel hurt when he lets go of their daughter so easily. That is, she thinks he did it easily, in fact I'm sure it wasn't, but I felt so awful for her. Of course, it doesn't help that I don't like the wife, but still.

I haven't got far enough into the Merrily Watkins books to know that much about Franny Bliss. I've just reserved book 4 from the library, inspired by Cathy at Kitling Books interview with Phil Rickman.

I don't tend to read crime fiction - or at least haven't for a few years but taking part in Carl's RIP and seeing some of the book entries and comments it's making me feel I should pick up again.
Thanks for the review.
Lynn :D

Lynn: I never used to read crime fiction at all, well almost never, I did get hooked on the Cadfael books back in the 1990s and read 20 all in one go... But since I've been blogging I've picked up the crime/mystery bug with a vengeance and now I suspect most of what I read is of the crime genre.